Welcome to ‘The Game Plan’ – a new content series in partnership with Umbro – that takes some of culture’s most influential new creators to back to their communities, exploring how football influenced their journey to become a next gen game changer. Football is having a bigger impact on music and culture than ever before, and this series will find out why by speaking to people who are at the centre of this new wave. First up, the self-proclaimed ‘Prince of Grime’, Yizzy, takes us to his favourite place to kick ball in Brockley and tells us how his life has always been about football and music.

Yizzy has an elite mentality. Still only 20-years-old, the MC already has a heavy list of certified bangers next to his name, including “Hustle Hard” which made the official soundtrack for FIFA 20 – a rite of passage for any artist who really wants to claim the streets. His momentum hasn’t stopped in the early months of 2020, with two explosive ‘Prince of Grime’ freestyles putting the whole scene on notice. The Brockley artist approaches his craft with the same qualities of confidence, excellence and expression as the current wave of young ballers who came from neighbouring boroughs of South London.

The self-proclaimed Prince of Grime is one of the most exciting new voices in culture right now – and football was a prominent influence in his rise. Like any other kid growing up in south London, football was the thing that unified people and provided the backdrop to day-to-day life. His love of the game has never diminished and it’s evident in his work today, from dropping baller-inspired bars in his tracks of shooting music videos in a cage. Yizzy is a living example of how football is sparking culture in 2020.

We took Yizzy back to his old 6-a-side cage in Brockley and kitted him out in the Umbro HIGHWAY from the new ARP sneaker collection – and pieces from the new Projects apparel range – before finding out how kicking ball and the community of South London laid the foundation for his calling as grime’s next superstar. 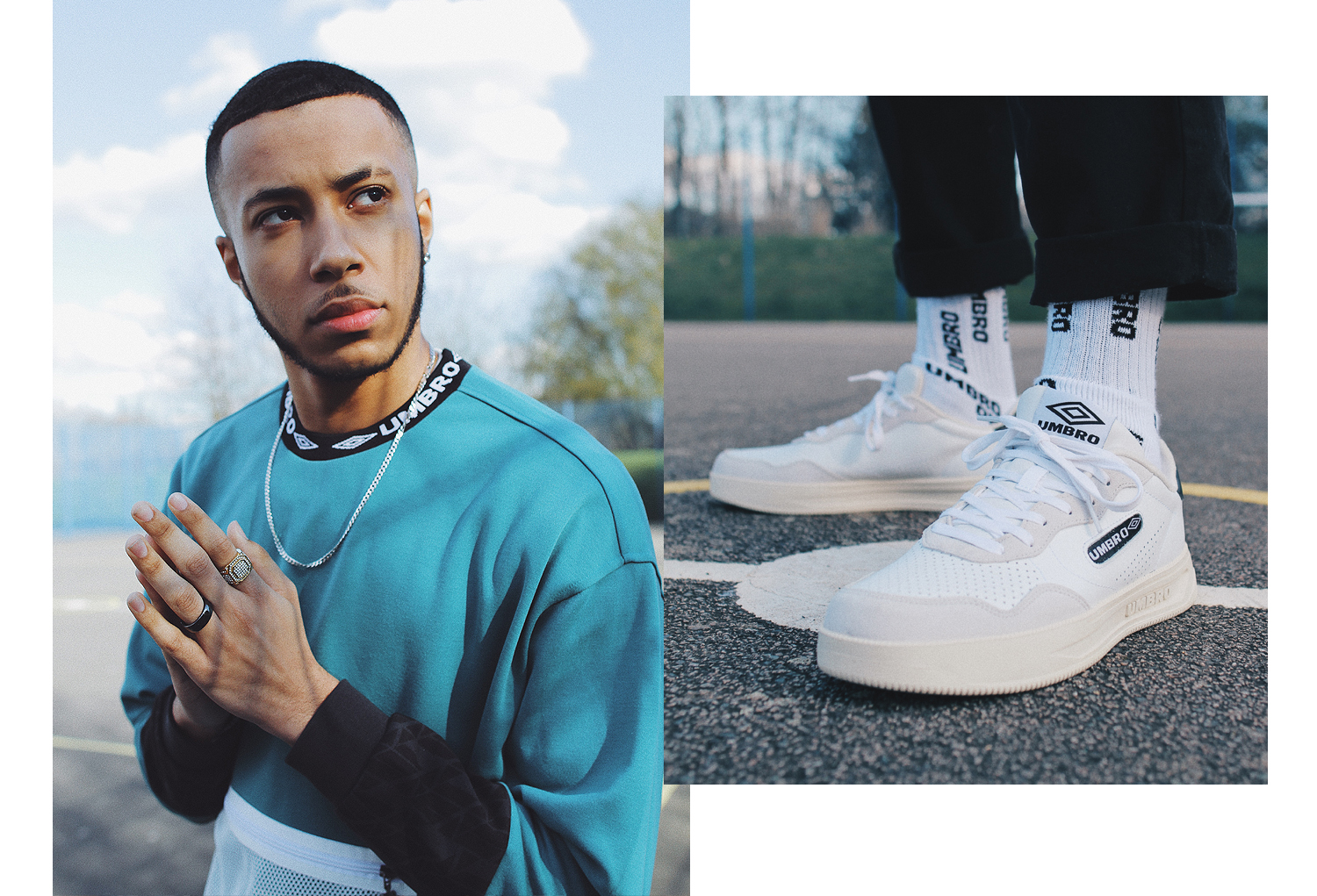 VERSUS: How important was football to you growing up in South London?

Yizzy: Football was always a big thing, all the way back from primary school days! Even if it was just having banter in the playground or whatever, it was the most prominent thing in everyone’s lives growing up here…myself included. It was a break from reality, we’d be talking about pro ballers casually like we just knew them as our friends and cussing their ability – when we all know our own ability was sub-par, it’s too funny. It was an important release.

It’s probably a little more distant now, just because my schedule is so music-based. I’m so busy most of the time nowadays. I still keep up with everything but it’s difficult getting to matches, as most of my shows and stuff I do tends to happen on weekends. I always keep up to date with results, transfer news, players…I’m still on it!

What was it like growing up in Brockley, and South London more generally?

Growing up in south is cool. There’s always this thing between people in south where you can always recognise someone else from south when you’re out and about – it’s a sixth sense, almost. Even if it’s certain things like talking about certain food spots, it’s different. West London has Sam’s Chicken, we’ve got Morley’s.

People from south are definitely the most creative. In the last ten years, you just have to look at the people who have come from south and their respective fields. Dave, Stormzy, Sancho…they are just three of the many superstars from south coming through at the minute.

What are some of your favourite memories of growing up here?

I miss school man. I don’t actually miss the studying side of it, but the banter there and just the amount of rubbish getting chatted all the time, the back and forth, that’s a vibe you just can’t recreate ever again. Even then, it was always about football – people just had some hilarious opinions. 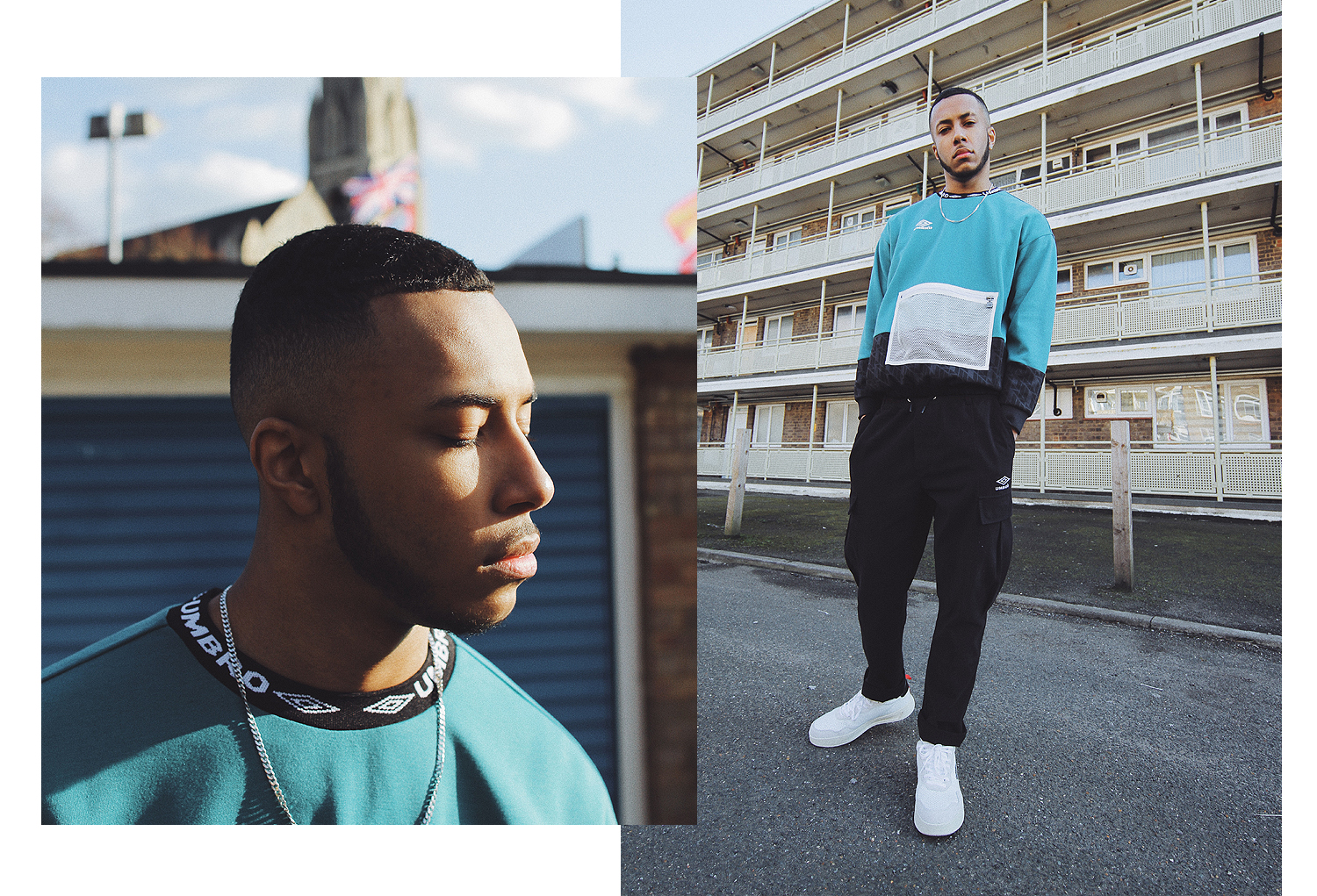 “I feel like the world can be a very bleak place at times – I always try and provide some optimism and hope through my music.”

How do you think growing up here has shaped your identity and influenced your work?

I got thrown in the deep end of life here straight away so when it comes to my music or my craft, I don’t feel pressure as easily as others. I can do long days of filming, studio sessions, work in general – it’s all just natural to me now. I think I’ve been quite resilient in life, so I think that’s really helped me when it comes to the music industry. You’ve got to be thick skinned in this game with all the hate that comes your way, and thankfully I feel like life here has prepared me for music and being a part of it.

How influential do you think football is for creatives? Be it in music, style, art – do you believe it’s having a more distinct impact in people’s work right now?

Definitely. I think social makes everything that players do so much more visible. There were probably things players were doing 10 or 15 years ago that creatives just weren’t aware of but right now, we can all see what young players like Mbappé and Sancho are doing – they’re getting more limelight and more shine. Players like that seem to have personalities coming out more with the content brands and clubs are putting out, too – that helps. Everyone loves being behind youngsters and underdogs now…I think our generation is way more collaborative and we’re all into music, football and style all at the same time.

When did you first pick up a pen or a mic with a view to being an MC?

Even before picking up a pen I was always just singing and freestyling. When I was 10-years-old, I wanted to go on Britain’s Got Talent! My mum’s always supported me though – she bought me a mic back in the day for like £40, £50, and I just used to mess around with it – getting used to hearing my own voice.

What inspires you to keep doing what you do?

I feel like the world can be a very bleak place at times. That’s why I do what I do – I always try and provide some optimism and hope through my music. If I can get to a level where I can reach loads and loads of people, I feel like I could do something really powerful in music. But above all else, I do it because I enjoy it. I feel like this is my calling, even though I discovered it really late on in life – at 16. I know this is what I was born to do. 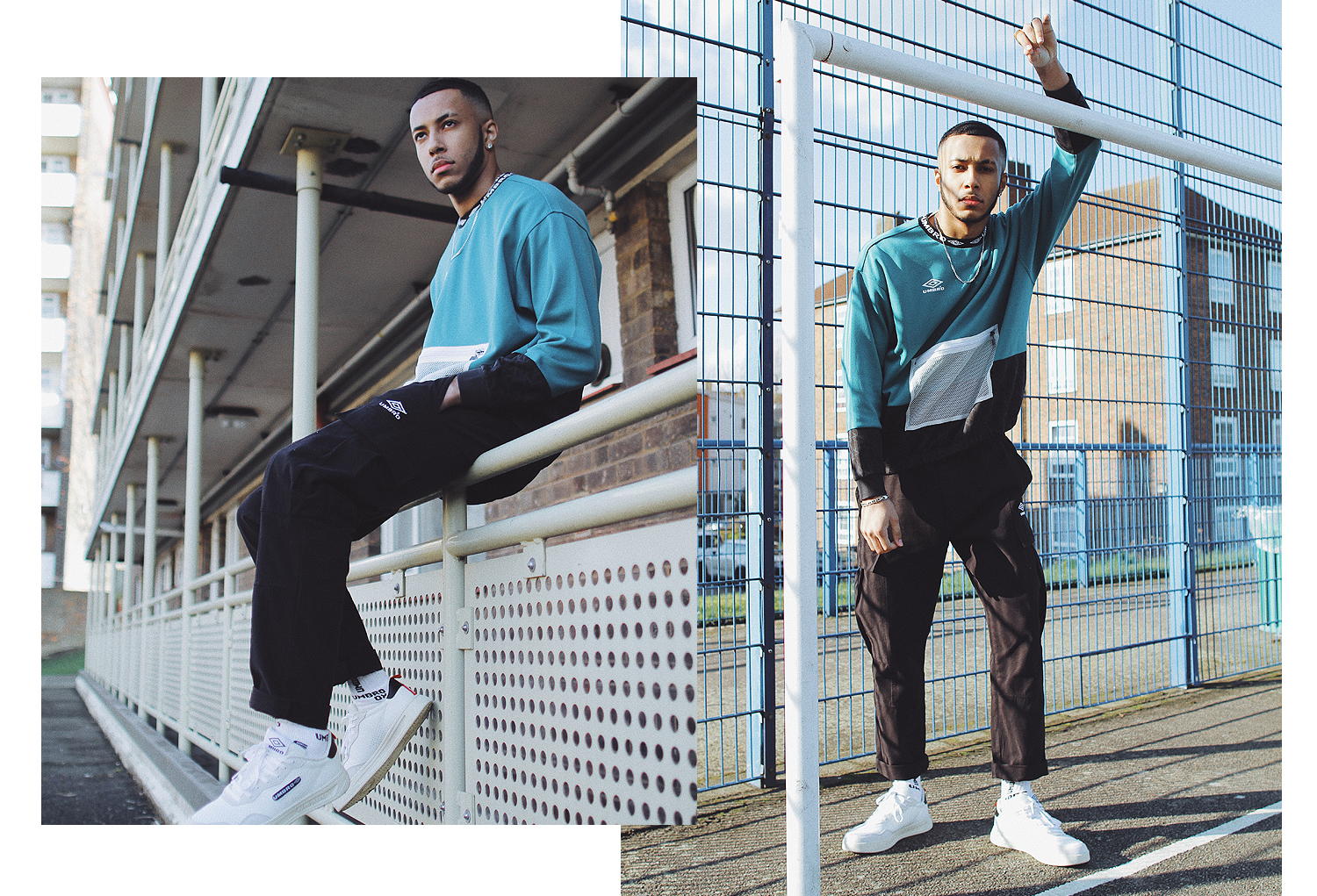 “Football’s massive for my music. The video for “Hustle Hard” was filmed on a cage football pitch.”

You’re someone who is very proud to represent grime. What does the genre mean to you?

It means a lot. I run with the title ‘Prince of Grime’ now – and that’s me showing the next generation that there’s a new person to look up to that’s their sort of age, aside from the legends like Wiley, Dizzee and more recently Stormzy. I wanna do something different with the genre. I wanna push it to all corners of the globe. Working with one of the legends that paved the way for me in Dizzee was a massive moment.

The “Prince of Grime” freestyles we’re very powerful. Why was it important for you to make that sort of statement with your music now?

Timing is key. When Stormzy and Wiley were going back and forth with their beef, it brought an excitement and buzz back to grime and broadened out the sound to new listeners as well. People that were just fans of Stormzy, Wiley and music in general may have been introduced to clashing for the first time and it shined a light back on the genre. After they finished up, it was an opportune moment for me to do my thing. It’s a freestyle I’d been planning to do for a while, but it was just a case of “when and how”. It was a good moment to strike while the iron was hot.

There’s a strong association between football and UK music and you’ve done work with Football Beyond Borders recently. How important is it to you to put on for the next gen and use your platform for good?

Football’s massive for my music. The video for “Hustle Hard” – my song on the FIFA 20 soundtrack – was filmed on a cage football pitch. There aren’t many outlets other than just education at this age – that’s why I love what Football Beyond Borders are doing with young kids in the area. The kids come down here to try and better themselves. I want to be seen as a guy who can help inspire the next generation.

As mentioned, you made the FIFA 20 soundtrack this year. How big was that for you?

Out of any FIFA game I ever get, FIFA 20 will always be important. As a 20-year-old, expecting a lot of big things in 2020, it’s just gonna be so sentimental for me. It still hasn’t sunk in for me really! I play FIFA 20 with my friends and my brothers all the time. But now I can say to them “let’s have a game”, and then hear my song on it…it’s just crazy man. There’s now this personal touch to a game I grew up loving and playing with my family and friends. 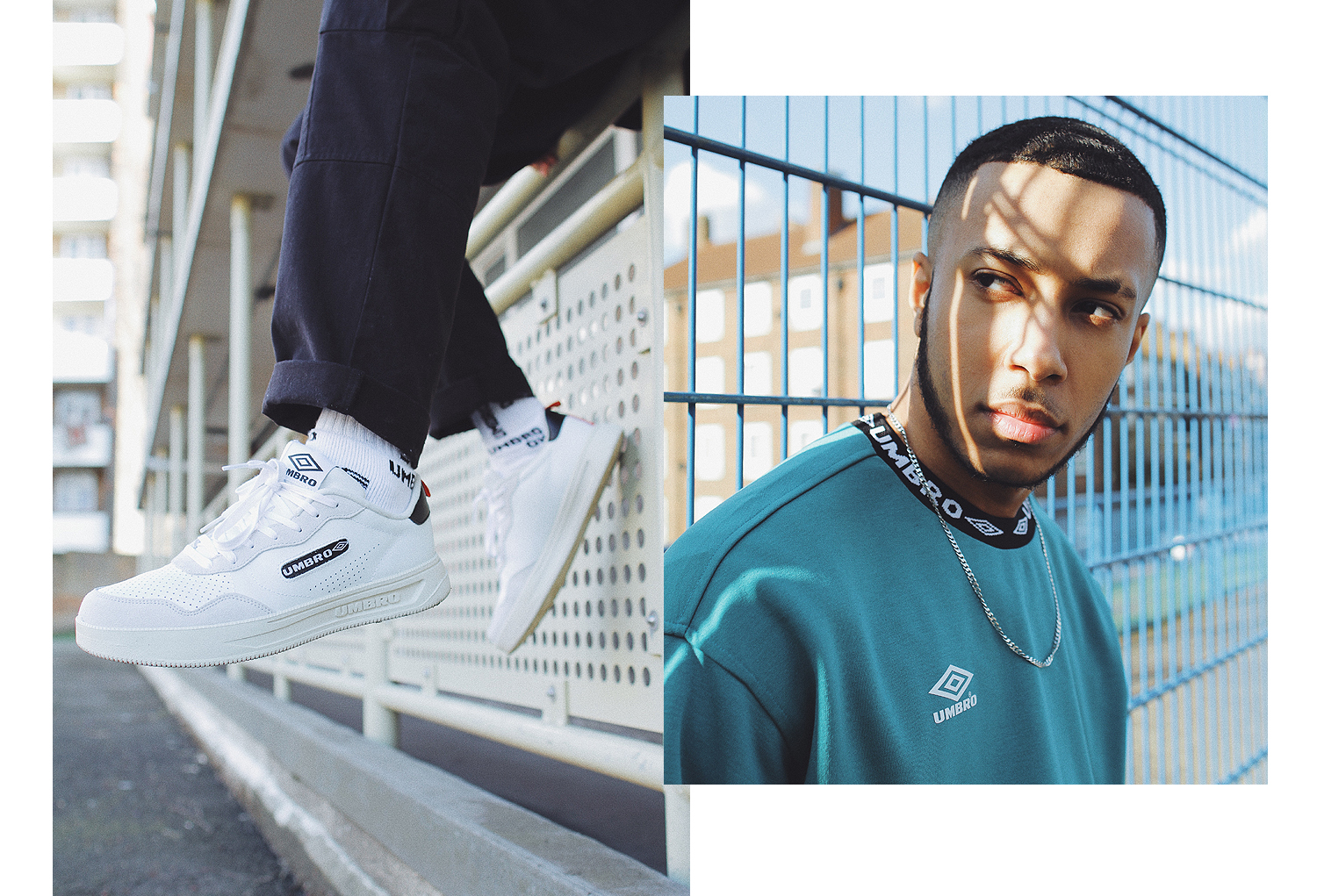 What do you think about the impact football is having on street style in 2020?

I love that brands like Umbro are able to drop stuff that’s perfect for football fans and people who are style conscious. I also think the work football clubs are doing with brands to create different types of product is sick, too – whether it’s shirts or tracksuits, they’re just being designed as things that people would don in their daily life. The current approach to releases means you can rock stuff on a night out as much as you could on the pitch, which I think is sick.

What are you wearing when you step out the house?

It’s got to be something casual and comfy, the fit I’ve got now is perfect – the trainers are clean and quite versatile. I think that’s quite a lot of people’s vibes to be fair, as everyone wants to feel comfortable while they’re out and about.

How important is it for you to look good and feel good when you work?

Always, always. Especially when you’re in studio, the priority is comfort. On stage, I ramp it up a little bit here and there – sometimes I sacrifice comfort for style – but it’s got to be something I’m able to perform in and able to move in.

What’s up next for you this year?

All I can say is watch this space. I always like to plan out my journey ahead of schedule, so there’s stuff coming. I always prepare and work hard for the future.