In ‘What Ballers Wear’, we link up with the most exciting players in the women's game and catch a vibe with them while they dive into their wardrobes before flexing their coldest fits. First up, we meet one of the brightest stars in the making: Lauren James.

Lauren James. Remember the name. The Chelsea forward became one of the most expensive teenagers in women’s football transfer history when she signed for The Blues last summer. Putting your money where your mouth is got a whole new meaning after that deal was brokered. But you get what you pay for, and they don’t come much better than James.

The former Manchester United player helped the Red Devils gain promotion to the Women’s Super League in their maiden season. She was the first player to ever score for the 0161 club, and was also the first to bag a goal at Old Trafford. Turned the Theatre of Dreams into a reality on her first attempt. Now under the wing of Chelsea’s Emma Hayes, the sky really is the limit for this stargirl. Reece James might play RB for the West London club, but LJ19 is right back where she belongs: taking centre stage at one of the biggest clubs in women’s football. It’s only right that VERSUS linked up with one of the game’s biggest innovators to talk about how she not only sets trends on the pitch, but off it as well. 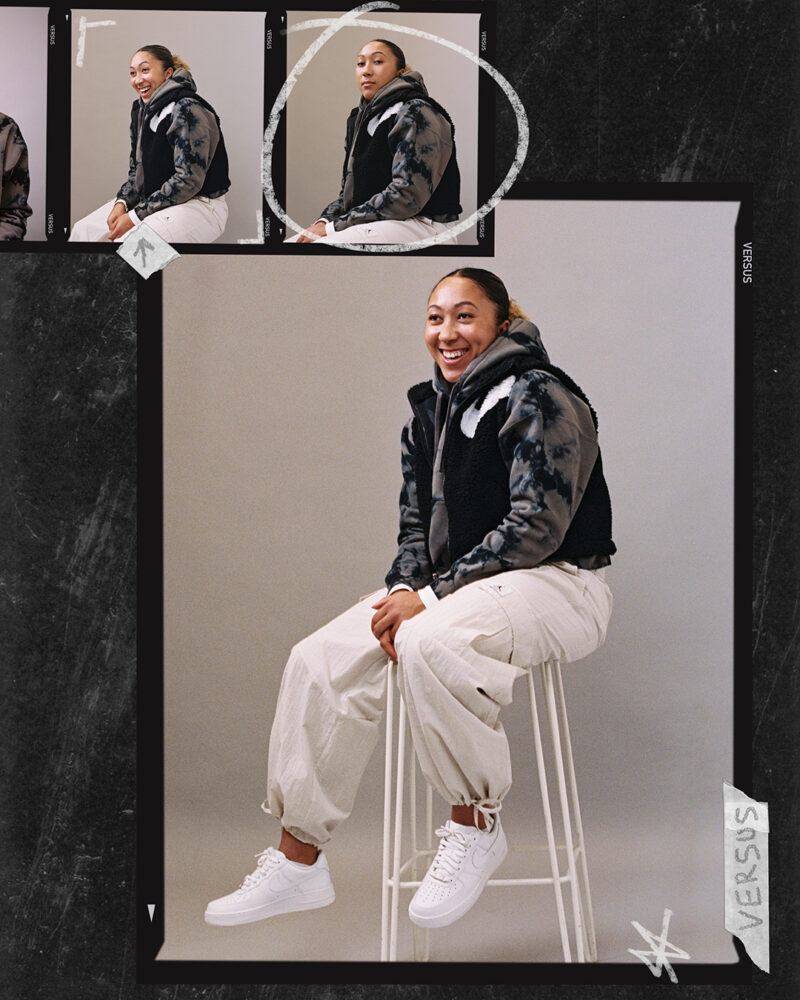 On the day VERSUS caught up with James she was on her way to our studio in Brixton from Chelsea’s Cobham training ground. “Training was alright today! My legs are a bit tired but it was a good session!” she tells us down the phone while making the journey to South London. We asked the young baller if she’s ever considered how her sense of style reflects her playing style. “I guess – if I really thought about it – my playing style and my sense of style aren’t too different! I love to feel comfortable in the clothes I wear, just like when I’m playing football. Comfort is key. I wear a lot of tracksuits, and a lot of loose-fitted clothing – nothing too baggy like my brother though!” We couldn’t help but ask who the best dressed James sibling is. “Me. Definitely me.” One thing is certain, the James family share a love of all things street style. Something that’s immediately confirmed when we ask LJ what her all-time favourite pair of creps are.

“Some people might describe me as shy, but if you make me feel comfortable you’ll realise pretty quickly I’m not shy at all.” 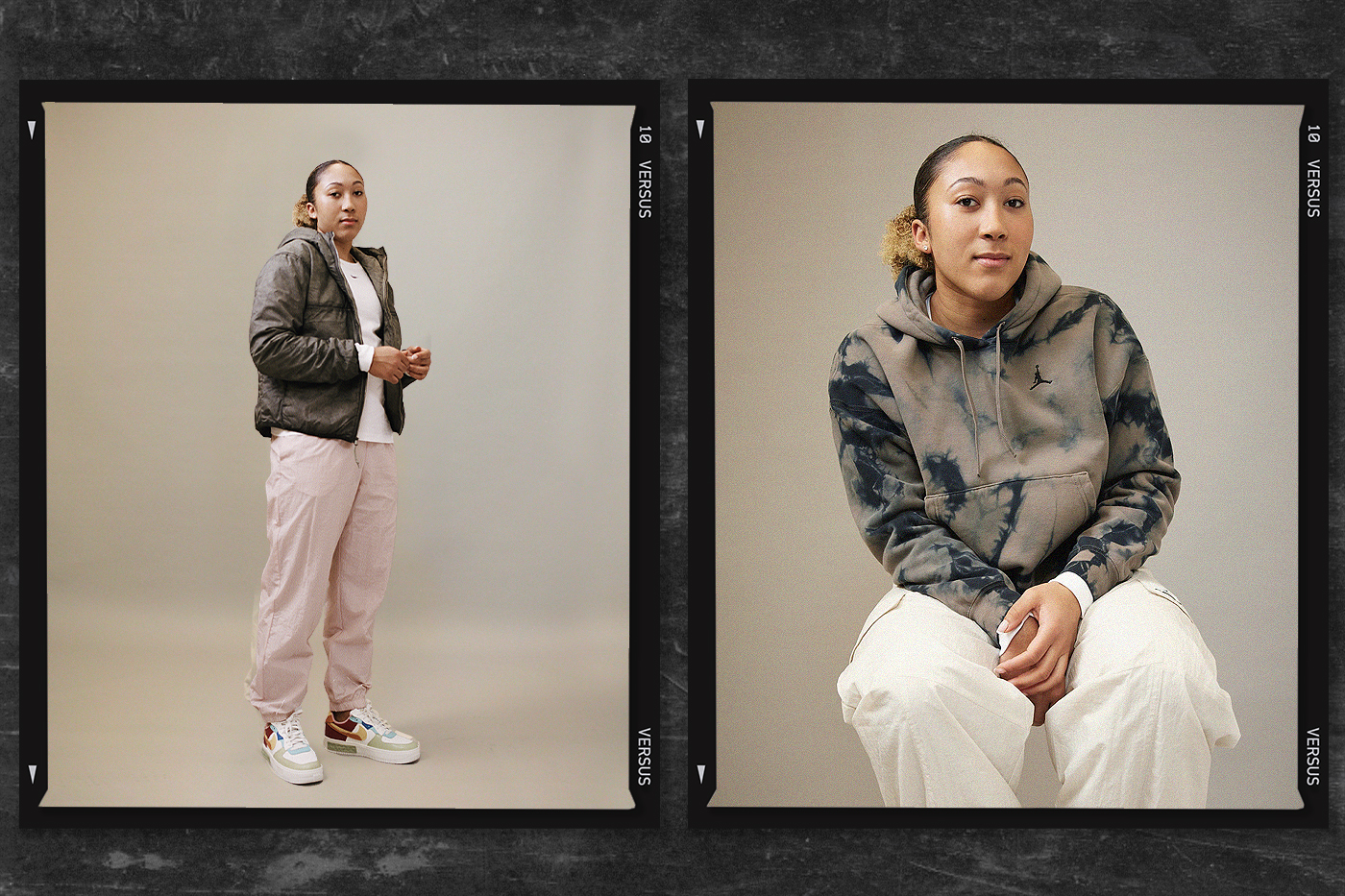 “My Off-White Jordan 4s. They’re one of my favourite pairs of trainers ever.” The women’s Off-White x Air Jordan 4 “Sail” originated as a sample during the late Virgil Abloh’s “Figures of Speech” exhibit in 2019, and is now one of the cleanest colourways to stem from the legendary Off-White X Nike collection. There’s no denying, LJ knows her kicks. “But right now, I’m wearing the Off-White Air Max – the black ones. They’re really comfortable, they go with everything and just look great!” and she’s not wrong. LJ rocks up to our shoot donning one of the OG pairs from THE TEN collab, trainers that add another dimension to the Nike X AMBUSH Motocross jacket she’s picked out especially for the shoot. A piece that gives a nod to her quietly confident and colourful personality.

Lauren James might only be 20-years-old, but everything from her responses to her outfit selections are impeccably considered. “Some people might describe me as shy, but if you make me feel comfortable you’ll realise pretty quickly I’m not shy at all. I like to take in my surroundings and the people I’m with before coming out of my shell” something she’s quick to do when onset.

“Nike is just one of those brands…everyone knows it! So to now be a sponsored athlete, it’s obviously a great feeling.” 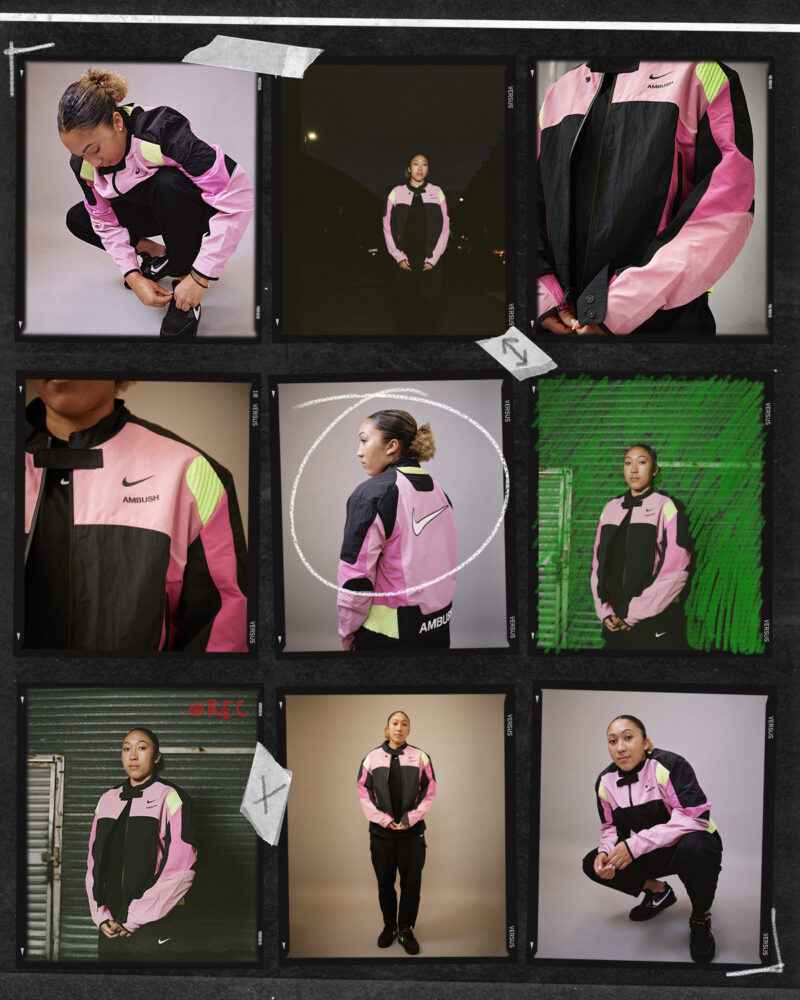 A natural in front of the camera, LJ pulls off every single fit with ease for the ‘Queen of Photography’ Danika Magdalena. When asked if she’s done many shoots before, we’re surprised to hear James’ response. “I’ve done a few, but not loads!” she says while donning an ACG camo puffer with a pair of multicoloured Air Force 1 Fontankas. “You can’t go wrong with an AF1 can you?” She tells us. The baller’s love for all things Swoosh is rooted in her childhood.

“Growing up, I would always ask for the latest Tech-Fleece tracksuit or a pair of white Air Forces for my birthday or Christmas. Nike is just one of those brands…everyone knows it! So to now be a sponsored athlete, it’s obviously a great feeling.” We ask LJ if having the backing of one of the game’s biggest brands gives her a confidence boost on and off the pitch. “I think I am quite a confident person anyway, but yeah…knowing that Nike’s decided to work with me, it means they’ve ‘seen’ something in me. And that’s a great feeling to have.”

“The women’s game has grown and moved on from when I was a kid. It’s finally getting the recognition it deserves.” 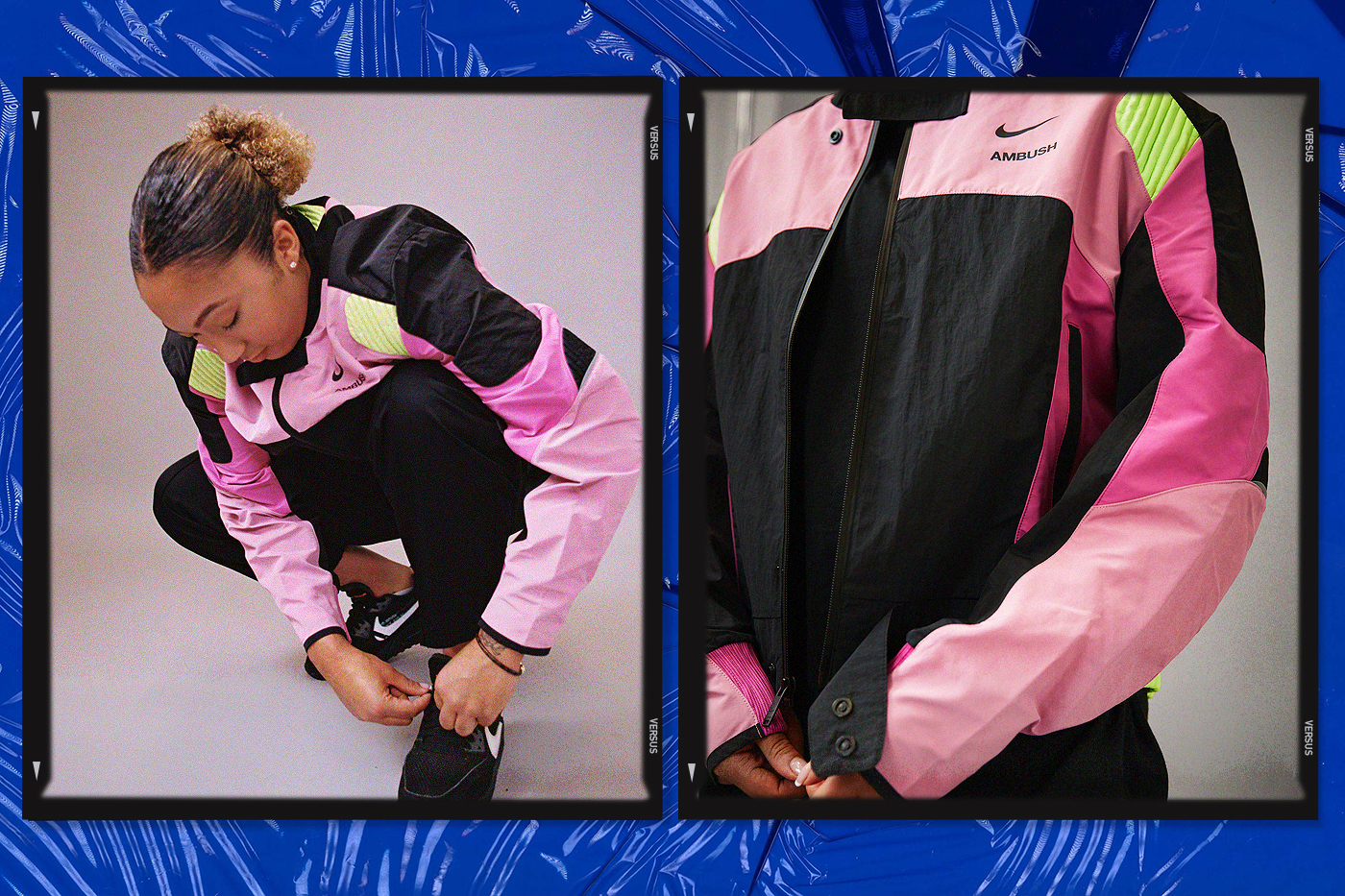 Nike and every other football fan around the world, would be quick to say they ‘saw’ something in James from the get-go. Despite her age, LJ carries herself with a level of maturity a lot of young players take years to master. Her role model status is one that has in some ways been forced upon her, but is something she takes in her stride. “I didn’t really have the opportunity to watch much women’s football growing up. I looked up to the likes of Hazard and Modric because they’re amazing midfielders. But now, the women’s game has grown and moved on from when I was a kid. It’s finally getting the recognition it deserves, and to play a part in that is great. I’ll keep trying my best to stay fit, and put the effort in on the pitch to help inspire the next generation.”

As the shoot wraps up, we ask LJ whether joining her childhood club Chelsea was always her ultimate career goal. “I’ve always wanted to play for Chelsea, ever since young. It’s a club that will always be in my heart. No matter what club I’ve been at in the past, or what club I’ll be at in the future. Chelsea will always be there for me. It’s a bit like coming home.”

“I’ll keep trying my best to stay fit, and put the effort in on the pitch to help inspire the next generation.” 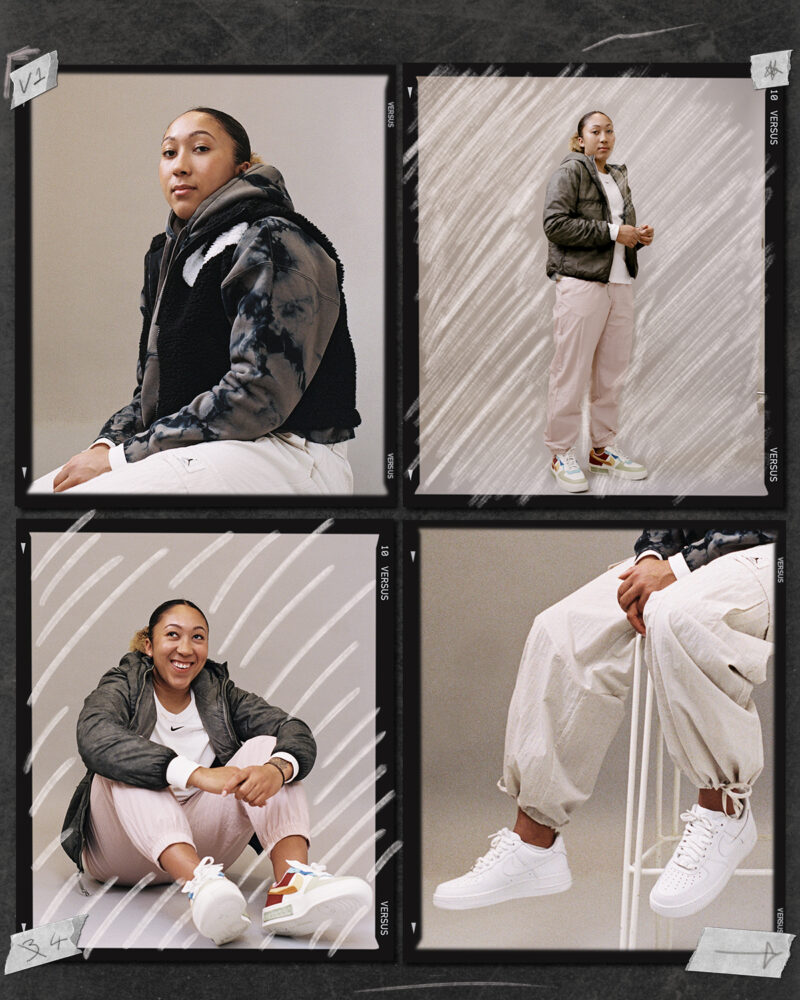 Whether it’s her crisp white AF1s, Panda Dunks or Off-White staples, James has a perfect fit for every kick. Much like she has the perfect pass or skill in her locker. The phrase ‘generational talent’ gets thrown about a lot in football, but it was coined and reserved for a certain type of player. And that’s Lauren James.

Photography by Danika Magdalena for VERSUS.