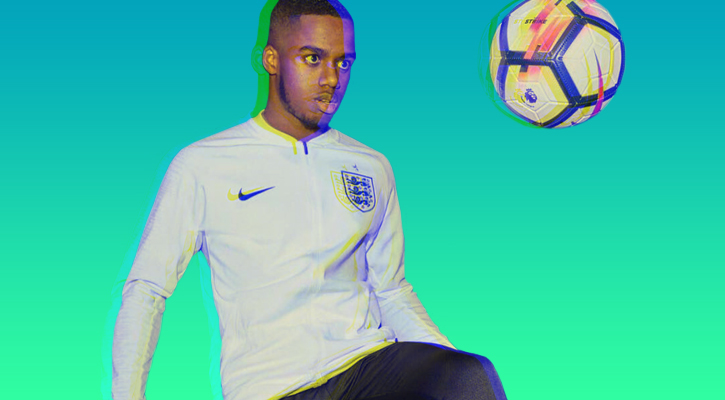 Image via Nike / VERSUS

Ranked by the likes of Sports Illustrated, Gazetta Della Sport and Four Four Two as one of the most talented youngsters in world football, the rise of 17-year-old Ryan Sessegnon is made even more exciting by him being English – he’s the poster boy for a new generation of young lions who have been lighting up the world stage at youth level.

Regularly found making seasoned pros look like half-cut Sunday League players in the Championship with Fulham – the club he’s played for since he was just 8 years old – the world is very much at Sessegnon’s feet.

As a nation, we’ve been prone to over-hyping players way too early down the years but Ryan Sessegnon is already looking like the real deal. Known for keeping his head down and working hard, he’s remained modest and humble despite his continued record-breaking antics for both club and country.

Here are 10 reasons why we should believe the hype.

1. He loves tearing up defences.

Sessegnon has explosive acceleration and a unique way of opening defences up by directly driving into space. The clip below demonstrates how easily he glides past his man time and time again. Reminiscent of a certain Gareth Bale, anyone?

Sessegnon uses his unique dribbling style to open up space for himself, by sucking defenders in before dribbling away from them to score great goals. The way he uses his body faints and cutbacks at 17 is so impressive and effective pic.twitter.com/kJUZbOhTTt

2. He’s already being spotlighted by Nike.

Nike already have a pretty clear idea of how much of a star Sessegnon is going to be. Born in London, Sessegnon starred in Nike’s recent ‘Nothing Beats a Londoner’ campaign alongside the likes of Eden Hazard and Harry Kane, showcasing how highly thought of he is by brands as much as scouts.

3. He bosses any position he plays.

Sess started his career operating as a left back, but has naturally moved further forward into a left wing role with Fulham to utilise his attacking threat. Again, this is where the Bale comparisons continue, but his uncanny knack at finding space inside the opposition’s box and slotting home is strikingly similar to Mo Salah.

4. He’s the highest scoring U21 in English Football.

This season has seen Sessegnon come on leaps and bound in terms of his goal output. After scoring five in 17 games from left back last season, he’s managed to bag 14 and assist another five this term, the best stats of any under-21 in the league football. And he still can’t legally buy a pint.

5. He’s the youngest ever player in the PFA Championship Team of the Year.

His exploits last season from left back saw him earn a place in the PFA Championship team of the year, a season in which he started aged just 16. He bagged five goals, assisted three more and got three ‘Man of the Match’ awards to boot – all in just 1622 minutes of his debut season of senior level football. Mental.

6. He was joint-top scorer at the U19 European Championship.

Sessegnon was an integral part of England’s Euro U19 winning team in 2017. Despite being one of the youngest members of that team, he was also arguably their best player, where he finished the tournament as joint Golden Boot winner.

I am truly honoured, humbled and blessed to have received the awards for the young Player of the year & the EFL player of the year at the London awards last night. It’s a great achievement in the early stages of my career so far and I hope to keep moving forward. It couldn’t have been possible without the help of my team mates and everyone connected with @fulhamfc. Again, I’d like to say a big thank you to everyone who voted for me, I hope I continue to learn, develop and improve as a player for the coming years.

7. Sessegnon is nominated for four awards this season.

8. He’s the most valuable Championship player of all time.

All of the above has seen him become one of the most in-demand players in England and could see him become the most expensive Championship player of all time (unless Fulham get promoted) with his value now estimated above £50 million.

9. He always has an end product.

Sessegnon will make or score a goal himself every other game, contributing just over one every 2 games (184.2 minutes), which is mad considering he’s played a large amount of his games at full back this year. He’s also scored with 28% of his shots (inc. blocks) in the Championship this term; the best shot conversion rate of any player in the competition.

England’s youth teams have enjoyed unparalleled success of late, winning get U17 World Cup, U19 Euros and FIFA U20 World Cup last year. Alongside the likes of Jadon Sancho, Phil Foden and Rhian Brewster, the future is bright – and Sessegnon is at the heart of what could be the next crop of golden talent from England. He received his first U21 call-up last month and is an outside bet to make Gareth Southgate’s World Cup squad this summer.