What makes a football shirt truly iconic? More often that not, the best jerseys of all time are remembered for their manufacturer, template and overall attention to detail – but the accompanying sponsor is also essential to making a kit the whole package.

Shirt sponsorship first became commonplace on shirts in the 1980s, and shortly afterwards the Premier League and revamped Champions League helped bring about the globalisation of the game that saw clubs move from community institutions to hugely profitable global organisations.

Brands like Fly Emirates, O2 and Pirelli are now associated with eras of dominance in Paris, London and Milan by being plastered on the shirts of the biggest teams in the world – and the rising commercial value of sponsorship deals has seen the aesthetic quality of shirts taken to new levels.

Sponsors are now fundamental to the aeshetic of a good shirt, with some of the game’s most recognisable clubs accompanied by legendary branding to create some of the most nostalgic jerseys ever created. We looked way beyond the barrage of betting companies in the modern game and delved into the archives of drip to round up the 25 most iconic sponsors we’ve ever seen. 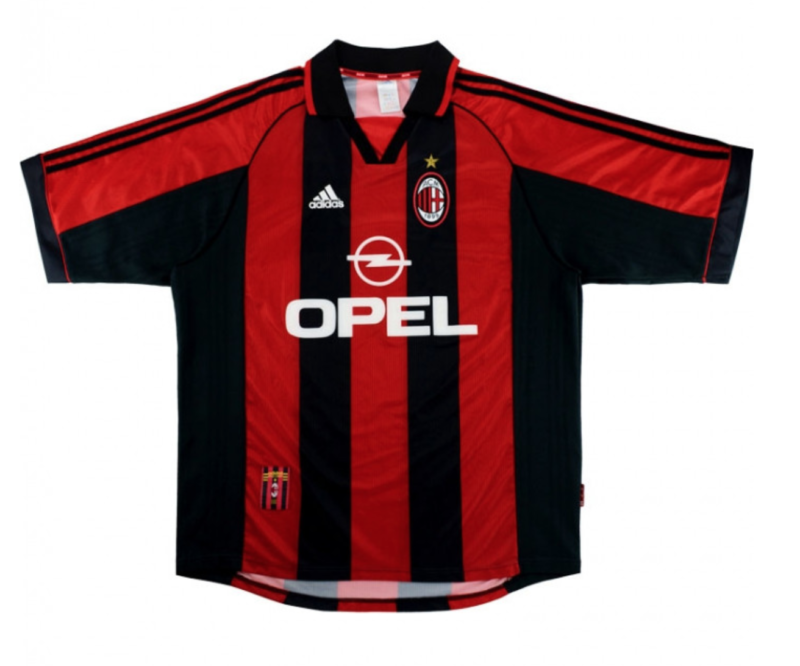 Opel is one of the cleanest club sponsors of all time, having been donned by PSG and Bayern, but the car manufacturer is most famous for badging AC Milan during a period of dominance in the 90s and 00s. The likes of Dida, Kaka, Shevchenko and Nesta all balled out in this iconic drip. 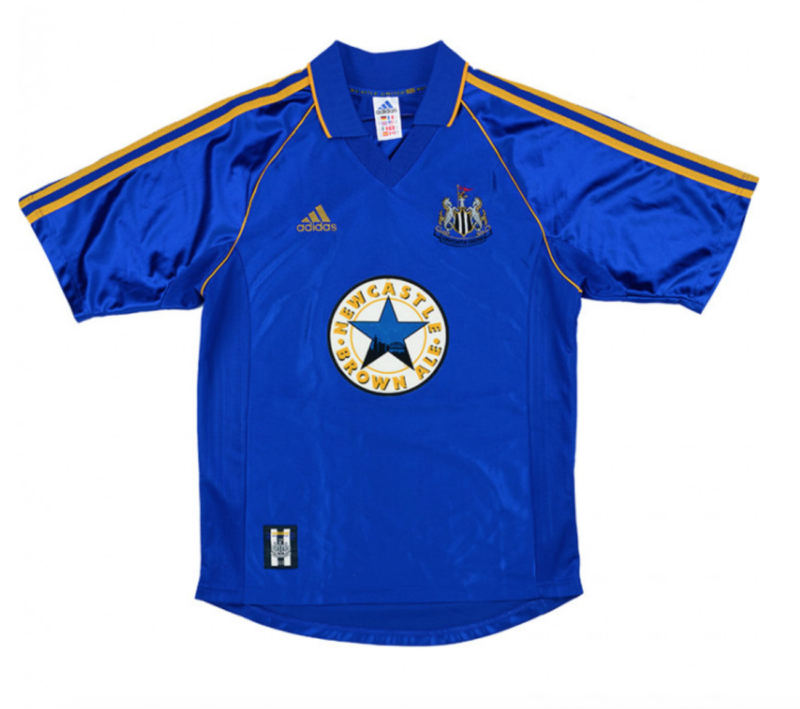 Although it seems like it lasted a lifetime, the Toon Army’s link up with Newcastle Brown Ale only lasted six years in the mid-90s. The partnership blessed a number of classic Premier League kits though, and was worn by the iconic Entertainers team of Ginola, Asprilla, Ferdinand and more. Authenticity is one of the most important factors to any kit, so when a local link up happens like this…it just works. 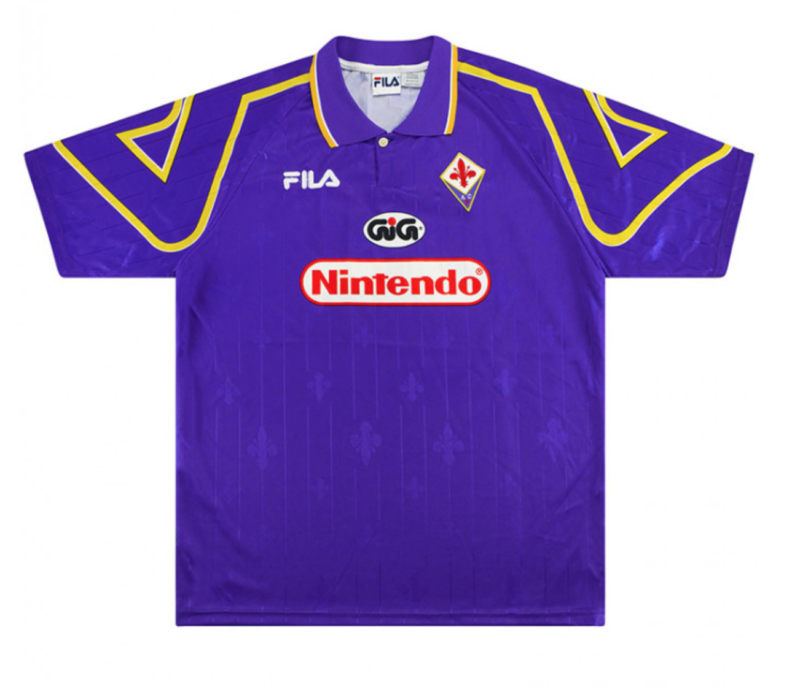 For two seasons, Fiorentina had one of the most legendary sponsors in the history of the game: Nintendo. The gaming giant linked up with the Serie A side to promote the N64 release and Batistuta toyed with Serie A defenders IRL like he was playing FIFA. Legendary business. 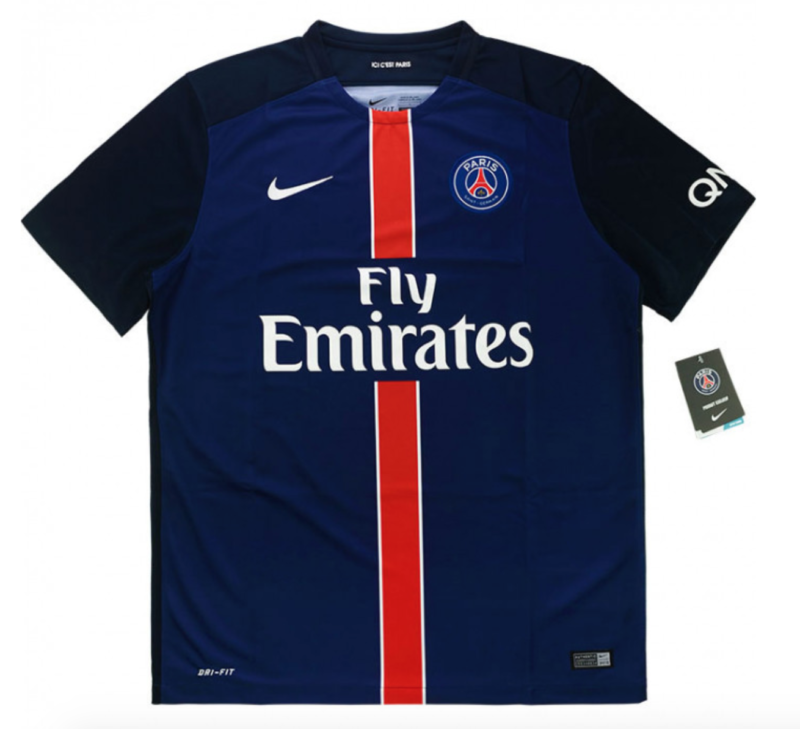 Nike and PSG didn’t miss once with Fly Emirates as the club’s shirt sponsor. PSG have long been known as the kings of shirt and street style, and they wouldn’t have been able to accomplish that feat without Fly Emirates ultra clean branding on their shirts. One of the cleanest combinations of all time. 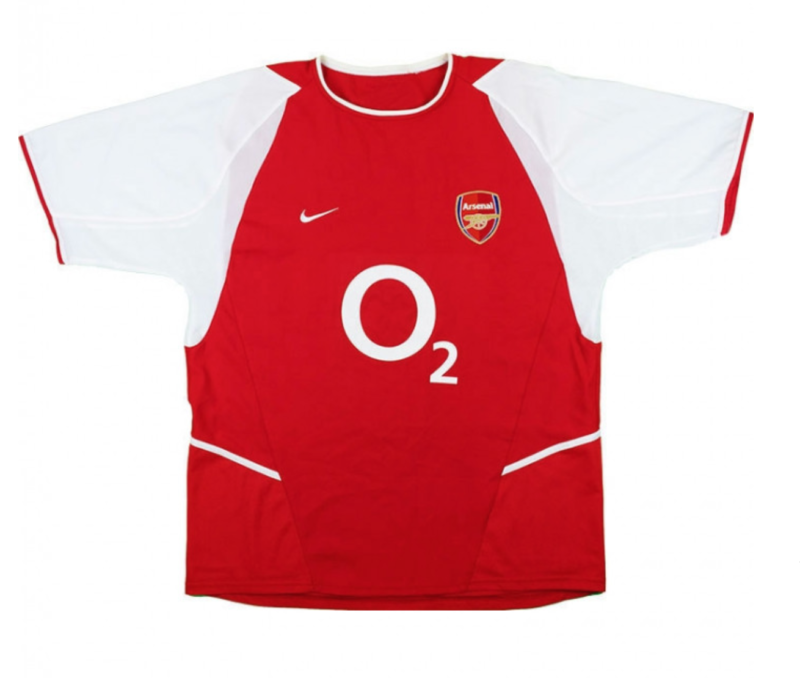 Arsenal have been blessed with some of the best shirt sponsors of all time, with only the cleanest logos found on their shirts over the last three decades. While JVC and Sega/Dreamcast are up their amongst the best, Arsenal’s O2 era was the best in terms of on-pitch greatness, which saw the likes of Henry, Viera and Bergkamp donning it in their prime. 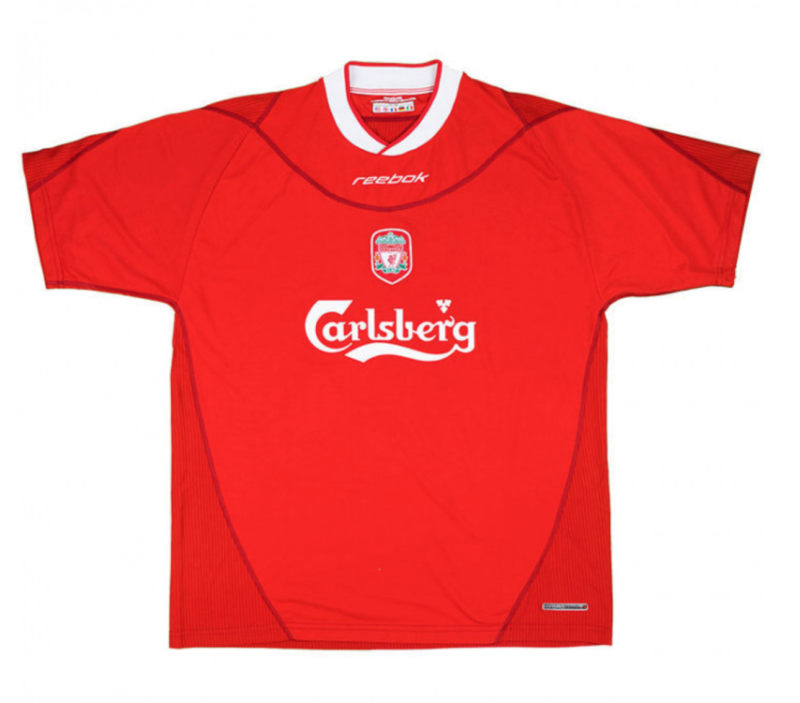 Carlsberg: probably the best shirt sponsor in Liverpool’s history…on an aesthetic level anyway. Sure, Crown Paints and Candy were donned in Liverpool’s glory days, but Carlsberg just hit different on a Red’s shirt. Despite plenty of years of mediocrity associated with it, images of prime Torres, Gerrard, and Istanbul also go hand-in-hand with Carlsberg on the jersey, making the Danish beer a truly legendary part of Liverpool history, and the longest standing partnership in Premier League history. 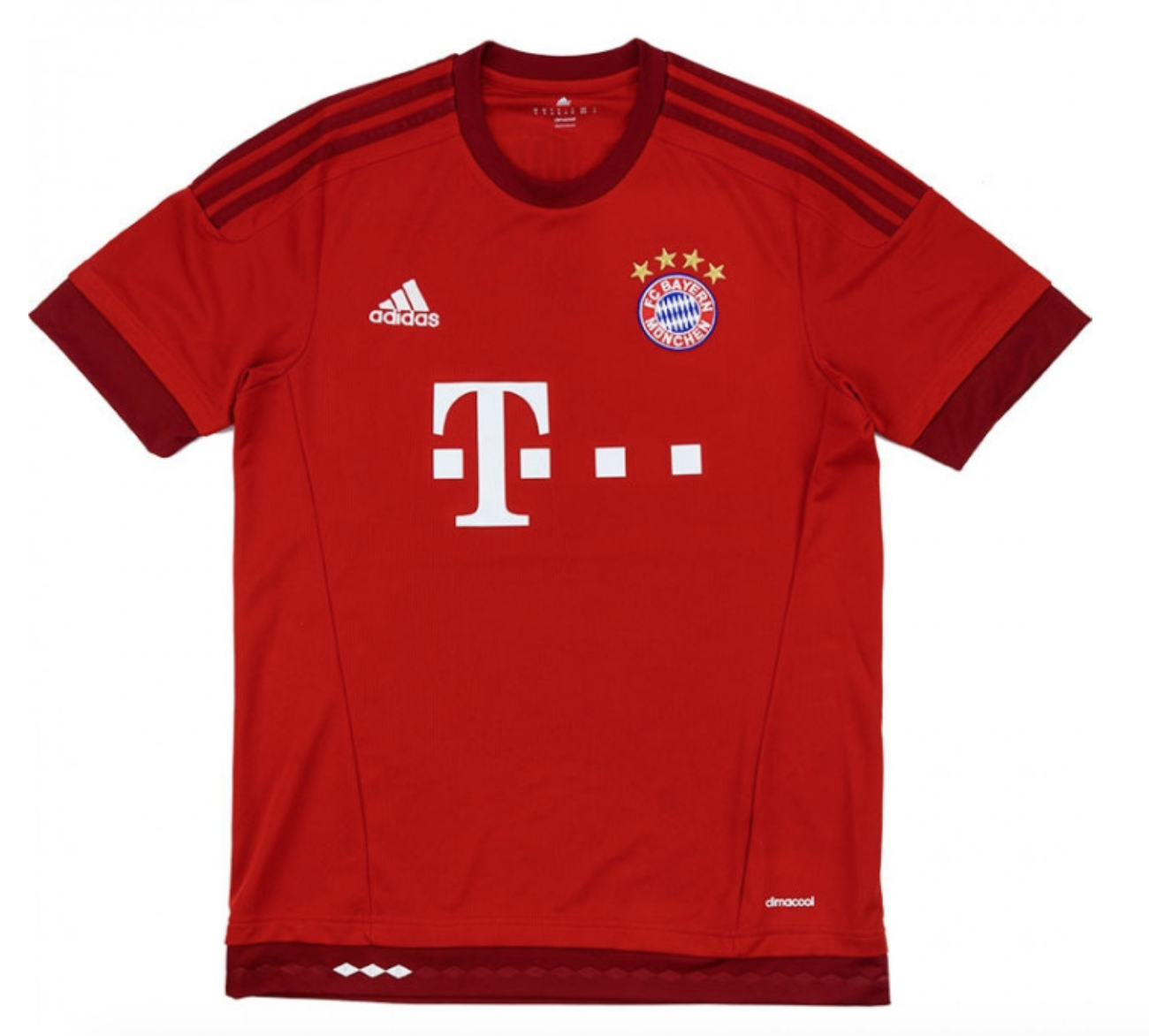 T Mobile’s refined ‘T’ template on the adidas x Bayern kits has seen an era of unrivalled drip coincide with era of domestic dominance for Bavarians. When Headie One is donning mash-up shirts with said T logo on, you know it’s a banger of a sponsor. 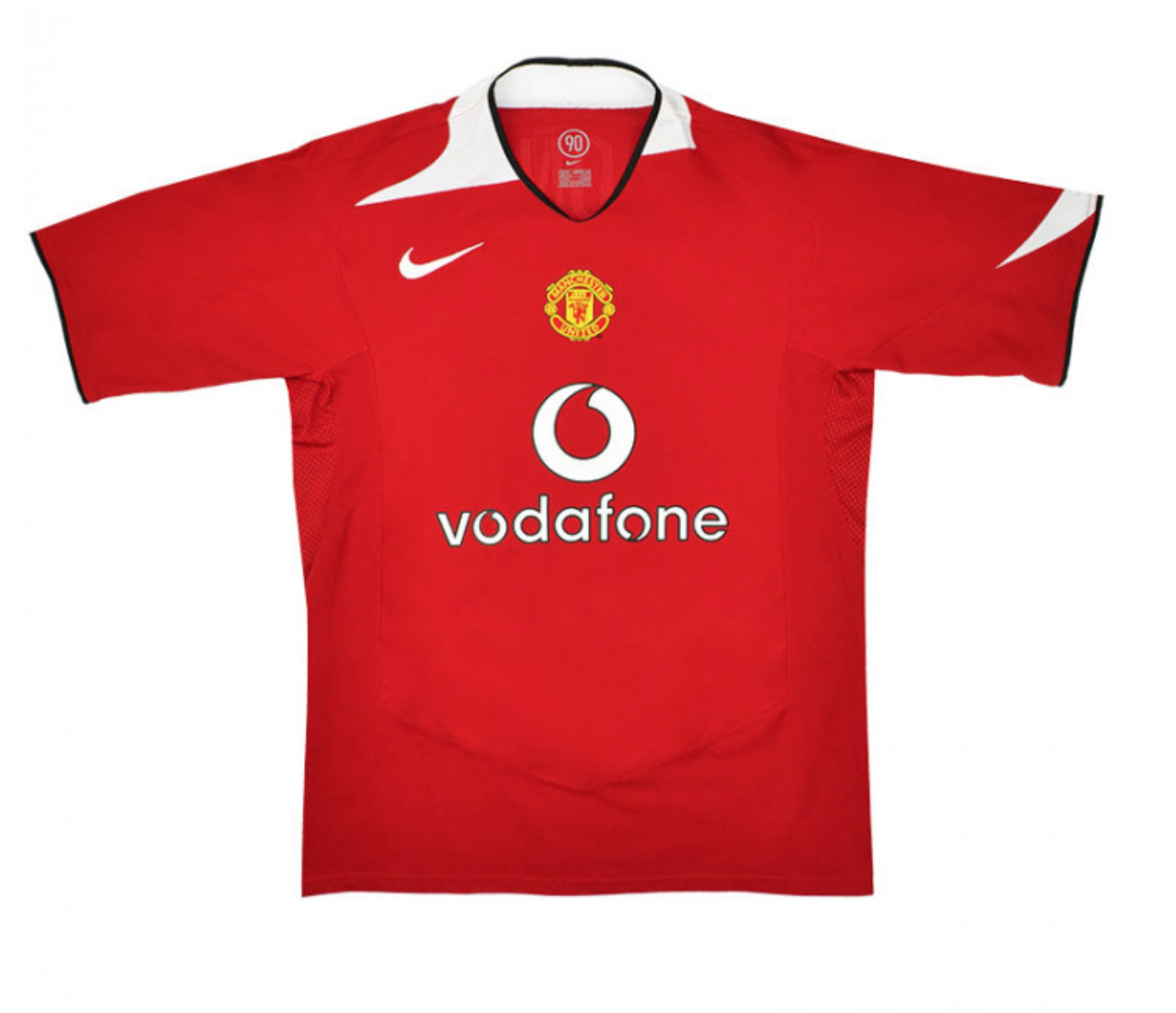 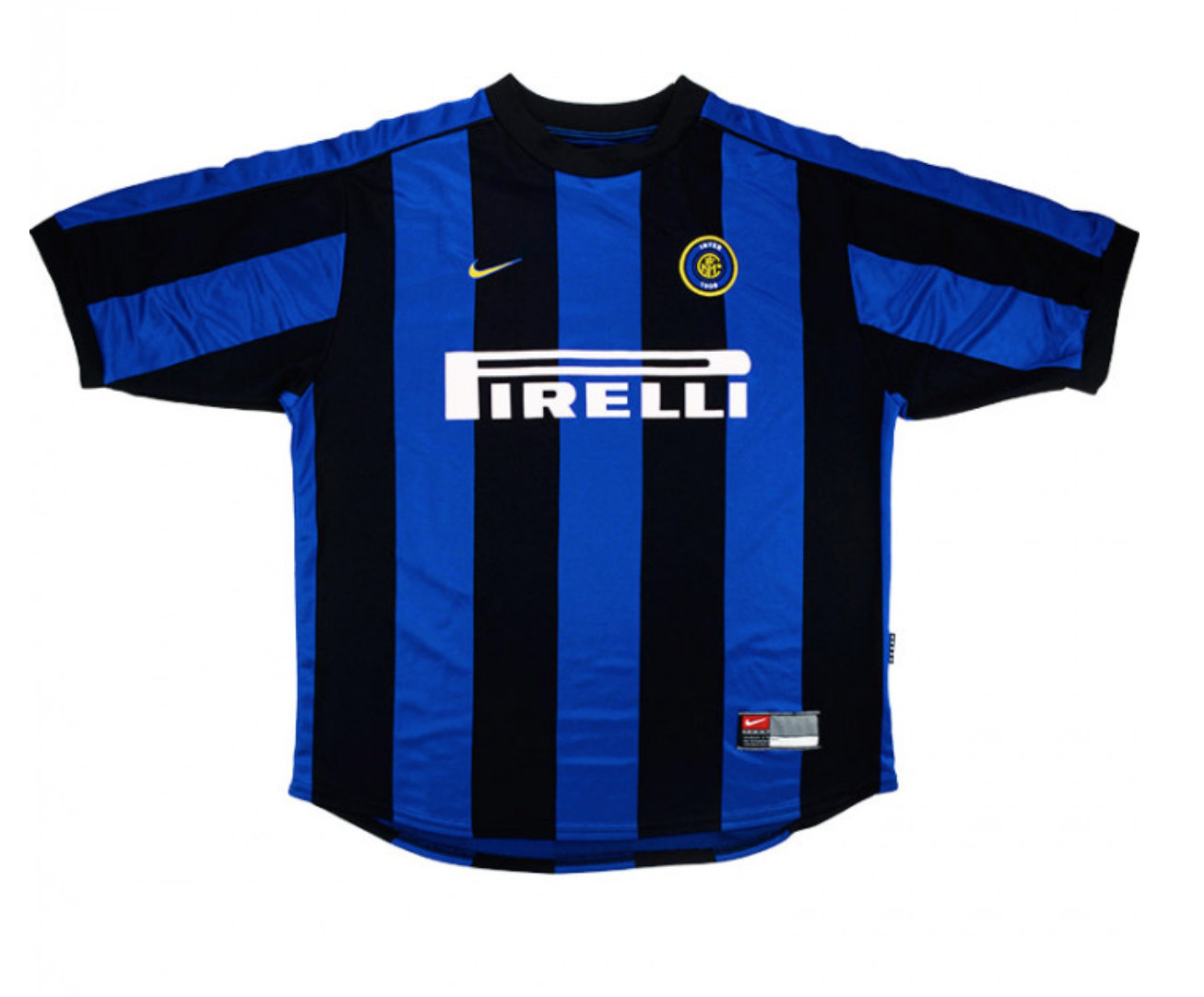 Inter Milan could be ending their iconic shirt sponsor partnership with Pirelli after this season, ending one of the most iconic brand partnerships in the game. Nike, recognising the greatness of one of the best logos about, designed the club’s third shirt this season around the sponsor itself, and threw in a cold capsule collection to boot. Levels. 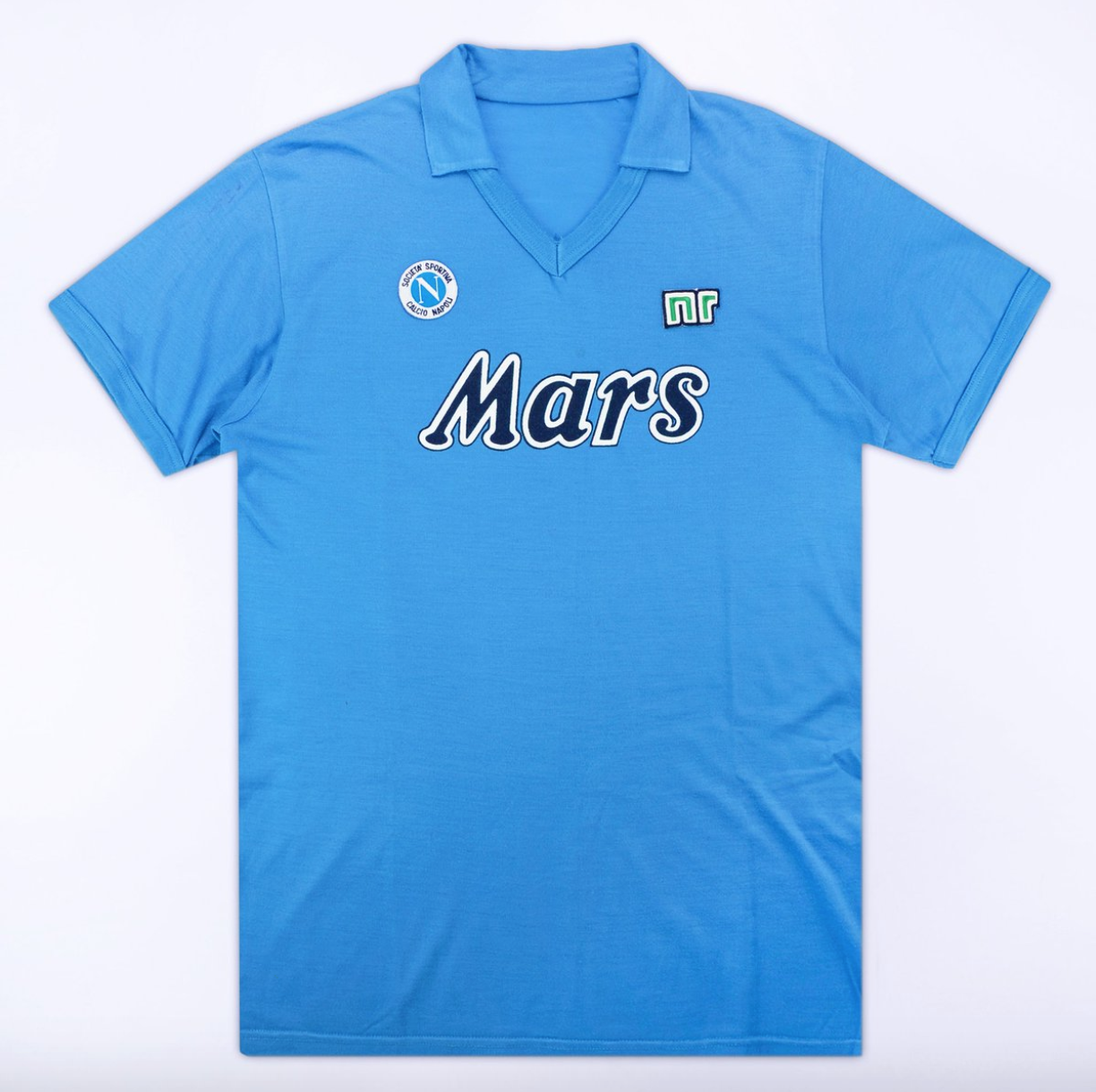 Maradona has turned every jersey he’s donned down the years into a classic, but the Napoli x Mars link up was absolute levels. Featuring a retro design and striking Mars’ font, the shirt is a Serie A classico, which the Azzurri won their last Scudetto in back in 1989.

With FILA at the helm of manufacturing, and the likes of Franky Lamps and Paolo Di Canio doing the business at the Boleyn Ground on the regs, West Ham fans will fondly remember the heady days when Dr Martens’ logo was emblazoned on the torso. Arguably the best Claret and Blue shirt ever made.

atlético madrid's sponsor used to be columbia pictures & they would change the jersey when a new movie was coming out pic.twitter.com/uhH6NzufAX

Atleti were in big financial troubles at the turn of the century, which resulted in the Madrid club being blessed with some of the most ridiculous shirts we’ve ever seen. In 2003, the club signed a sponsorship deal with movie studio Columbia Pictures, which meant that ‘White Chicks’, ‘Terminator 3’ and ‘Hitch’ were some of the films supported by Fernando Torres prior to his move to Merseyside. 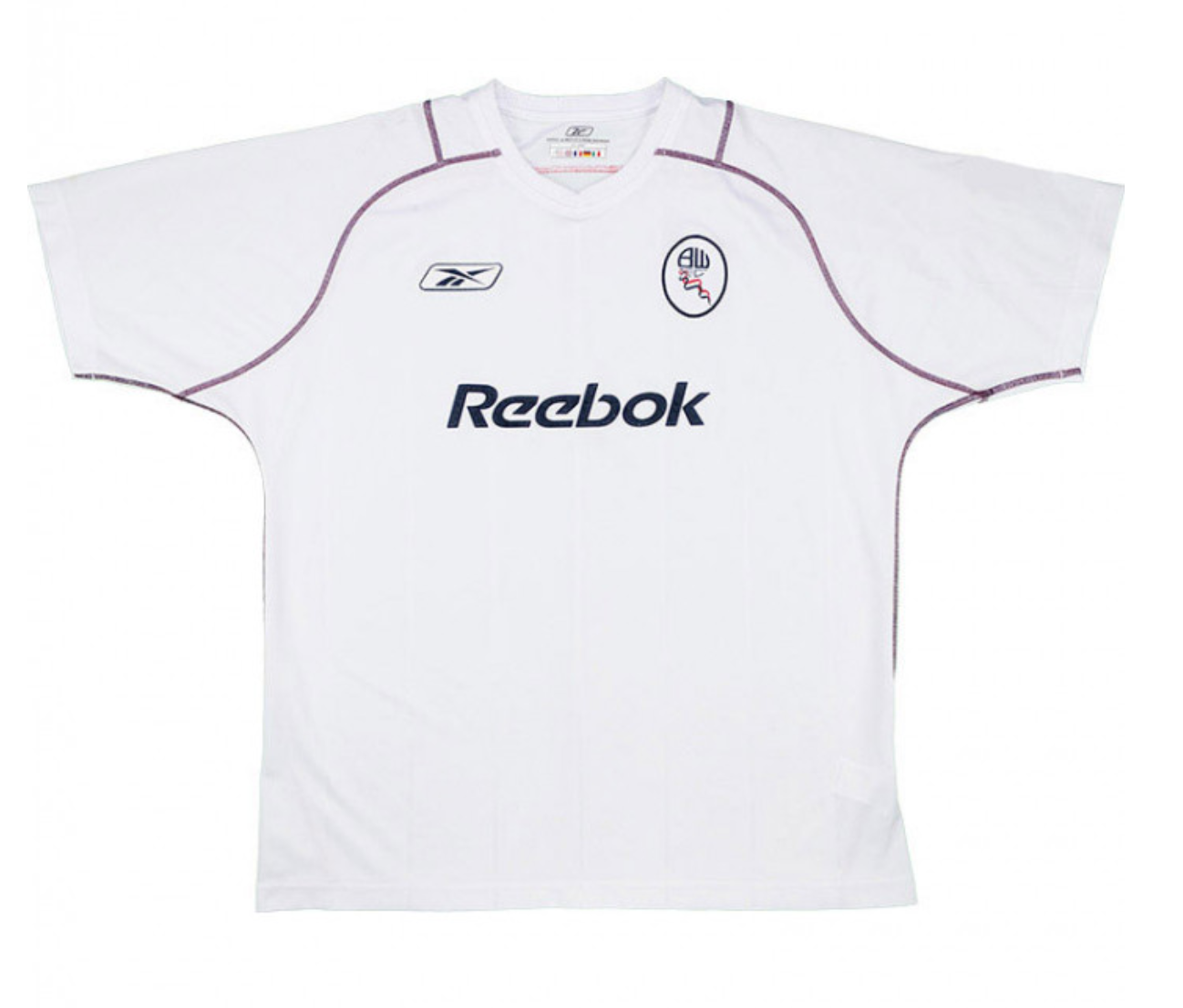 Reebok doubling down as both kit manufacturer and shirt sponsor for the Wanderers saw the likes of Ivan Campo, Gary Speed and Jay Jay Okocha ball out in a shirt which symbolised a legendary era of Bolton brilliance, at The Reebok, of course. Peak Big Sam. 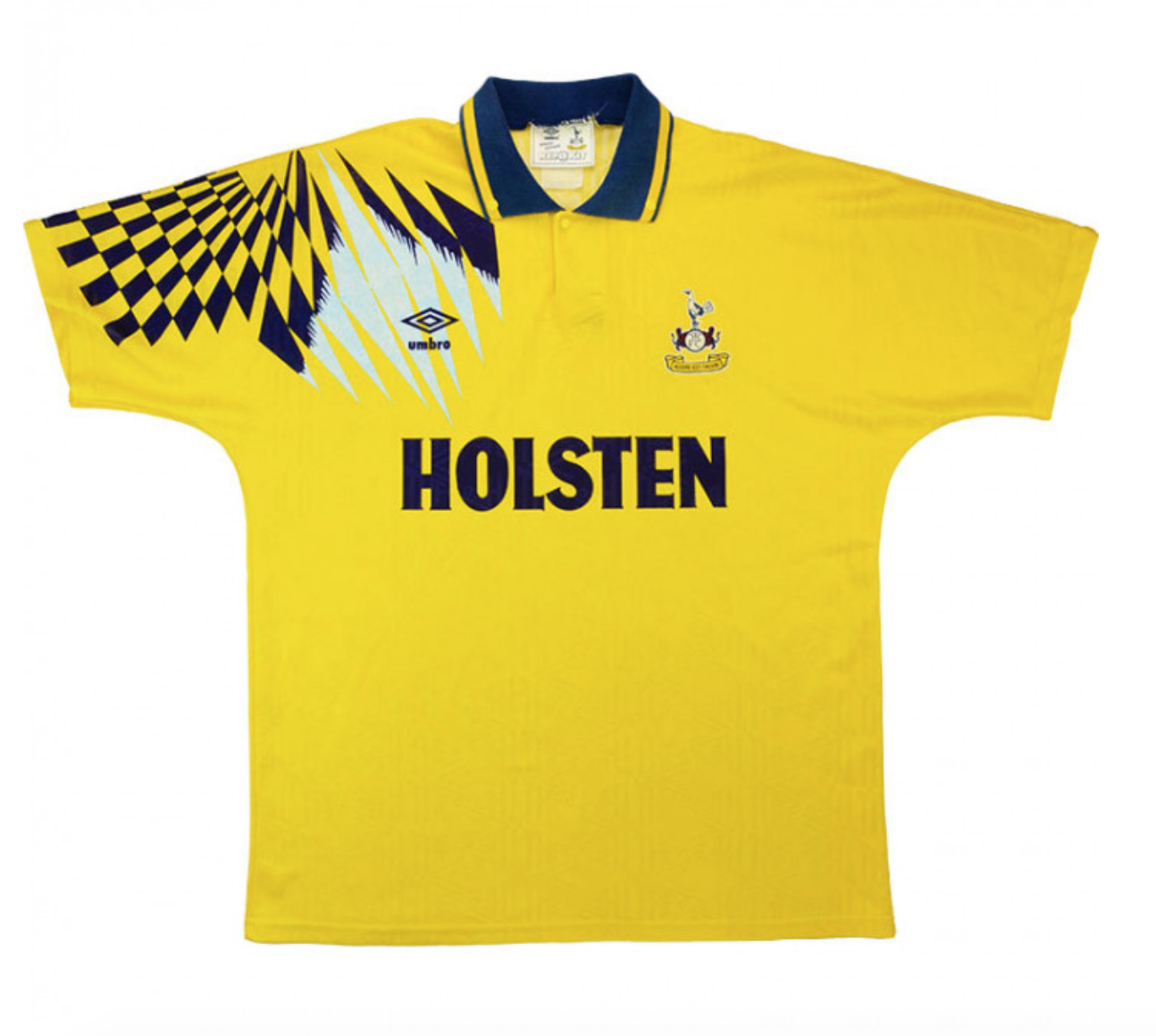 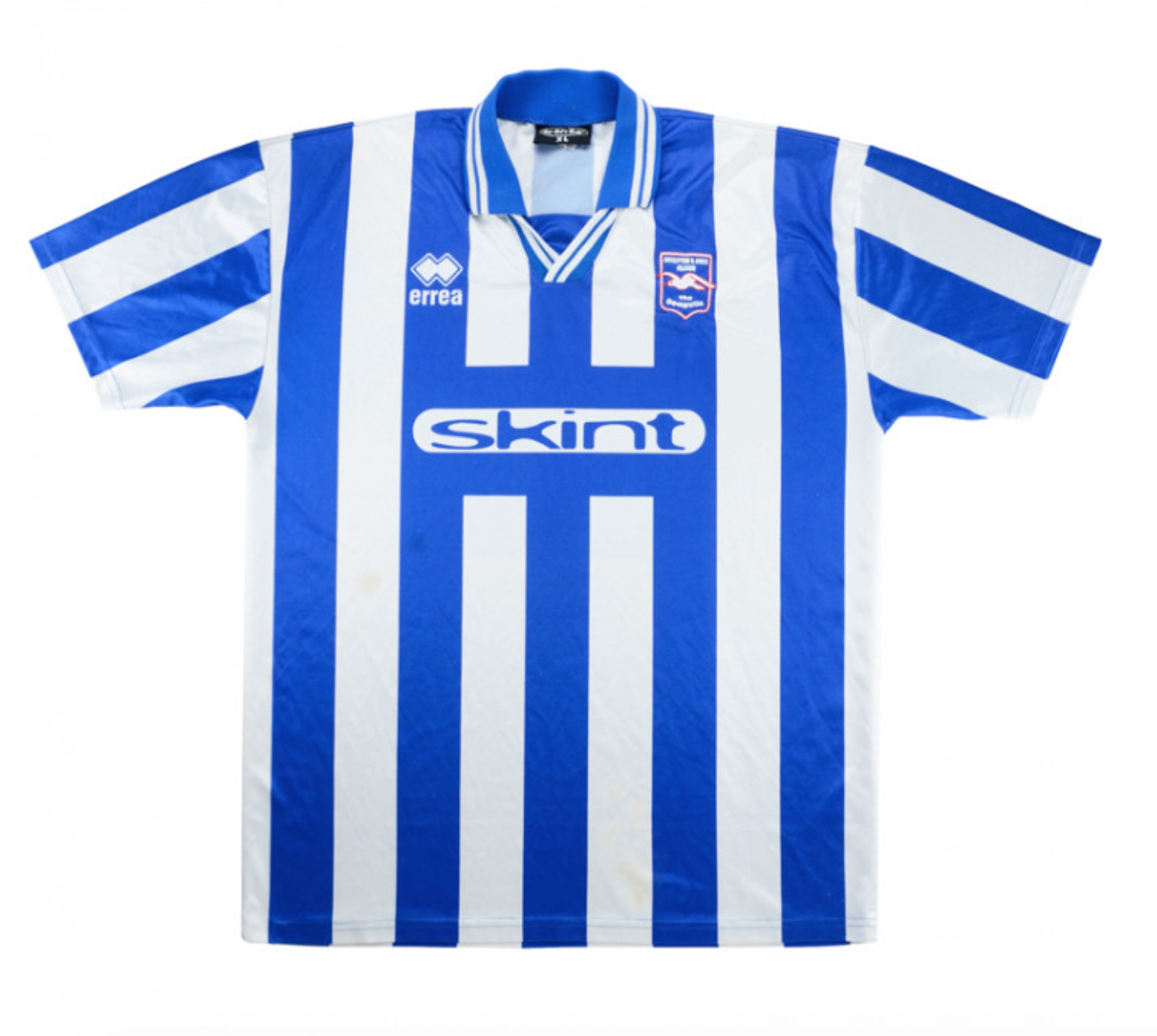 Long before Brighton baled out in clean Nike and American Express shirts in their multi-million pound stadium,’Skint’ was emblazoned on Seagulls shirts for many a season. The dance music record label sponsored Brighton for nine years until 2008, with renowned Brighton fan Fatboy Slim enjoying huge success under the label at the time while they sponsored the club. For a club that was without a stadium and floundering in the lower leagues, it was a perfect match. 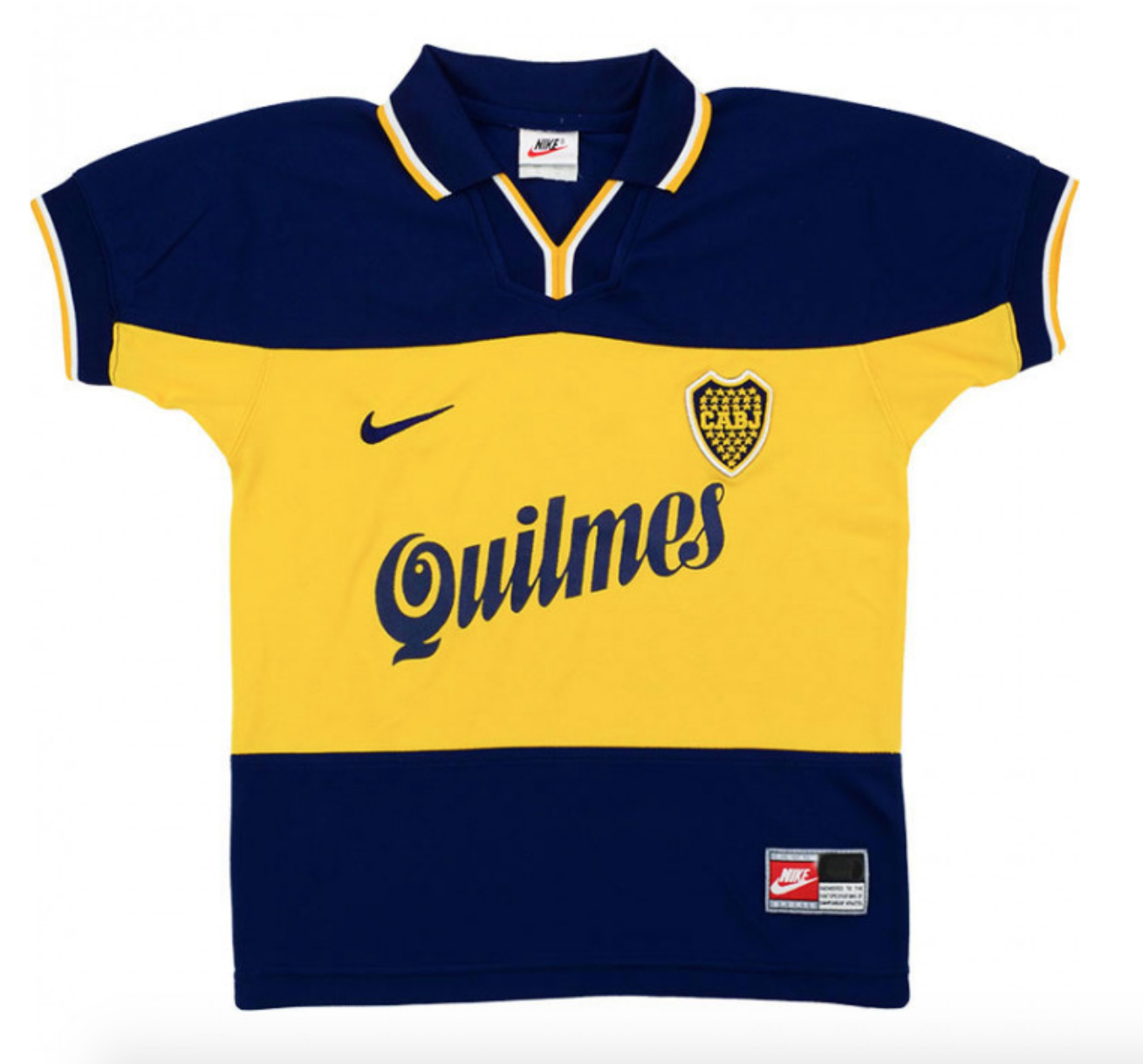 The Argentinean brewery Quilmes, founded in 1888 by the German immigrant Otto Bemberg, sponsored Boca Juniors from 1995 to 2001. It was just as the club had started a partnership with Nike, leading to a wave of fresh kits from one of South America’s most storied clubs. 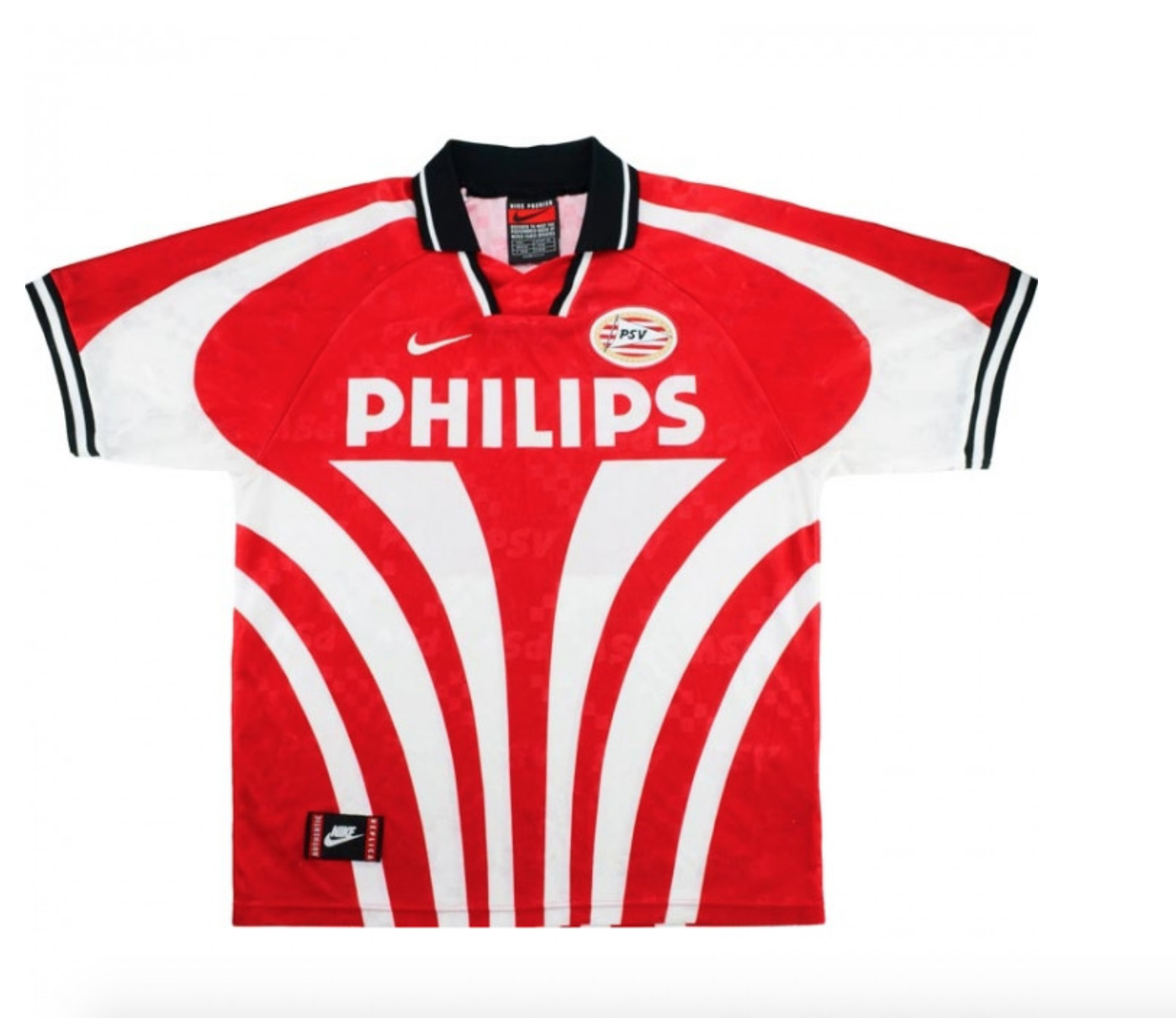 The clean Phillips branding popped so nicely on old PSV and Nike jerseys, with the Swoosh serving up nothing but heat for the club back in the late 90s early 00s. This era also saw R9 come to the forefront of global football as the biggest new bagsman in the game. 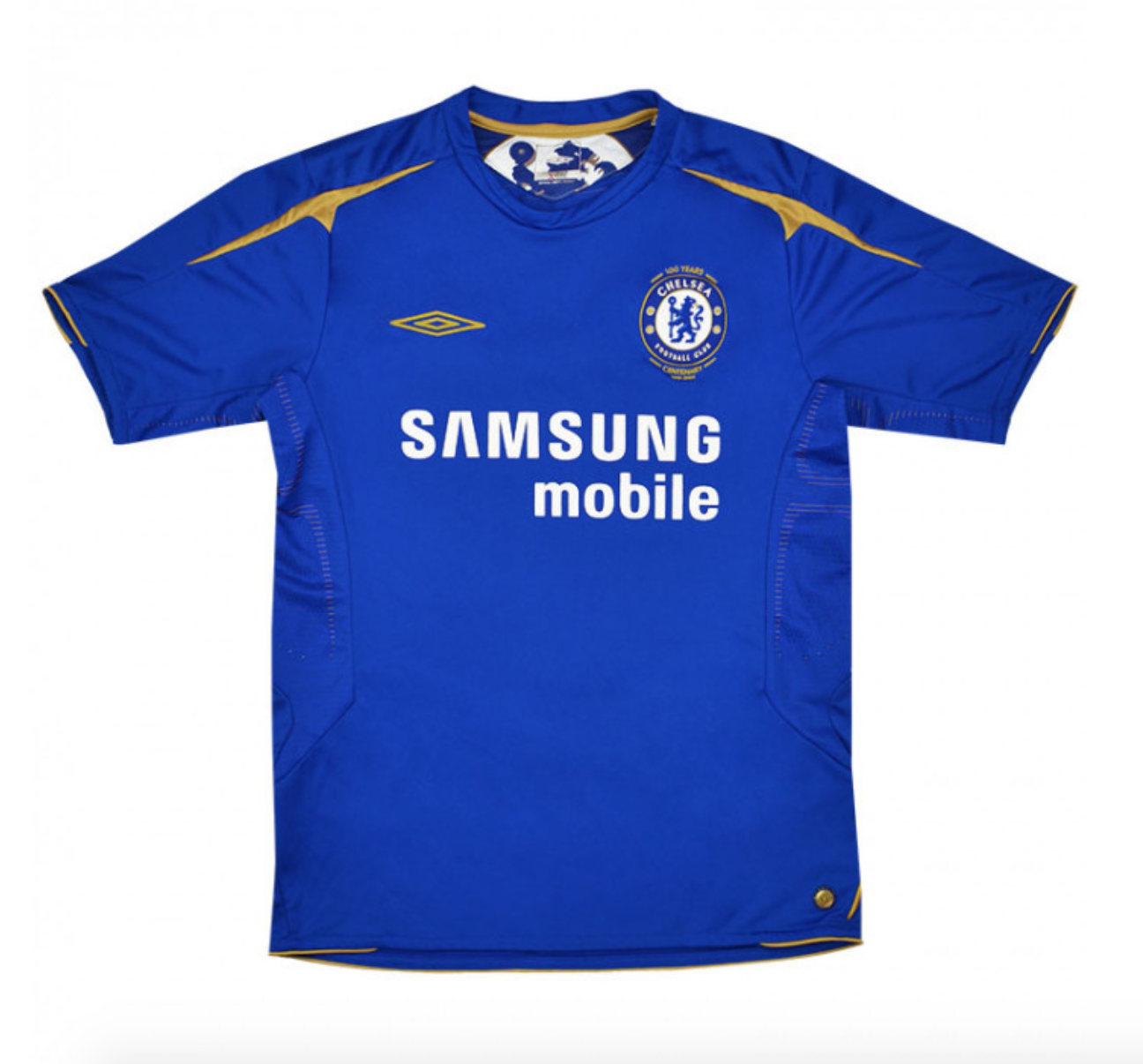 Samsung might not be the waviest sponsor of all time for Chelsea – Coors and Autoglass actually look way better on kits – but the Blues’ era of success with the electronics company on their shirts make it the club’s most iconic sponsor. Premier Leagues, FA Cups and the Champions League all came during this partnership. 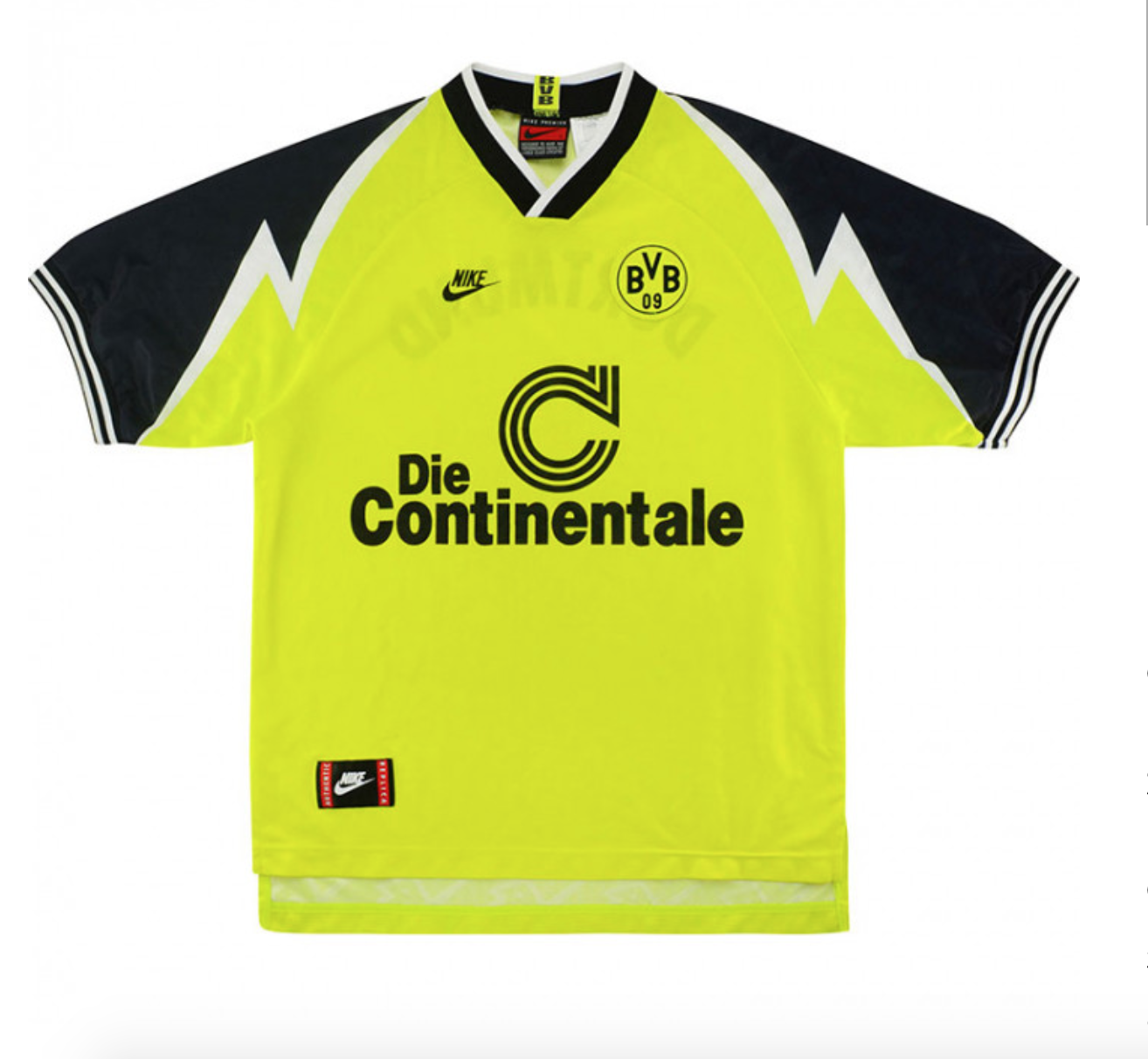 Up there with all of the most sought-after retro fits today, every single Nike x Die Continentale jersey donned by Dortmund throughout the 90’s were all absolutely certified with unique designs and a bold colour palette. Bangers on bangers. 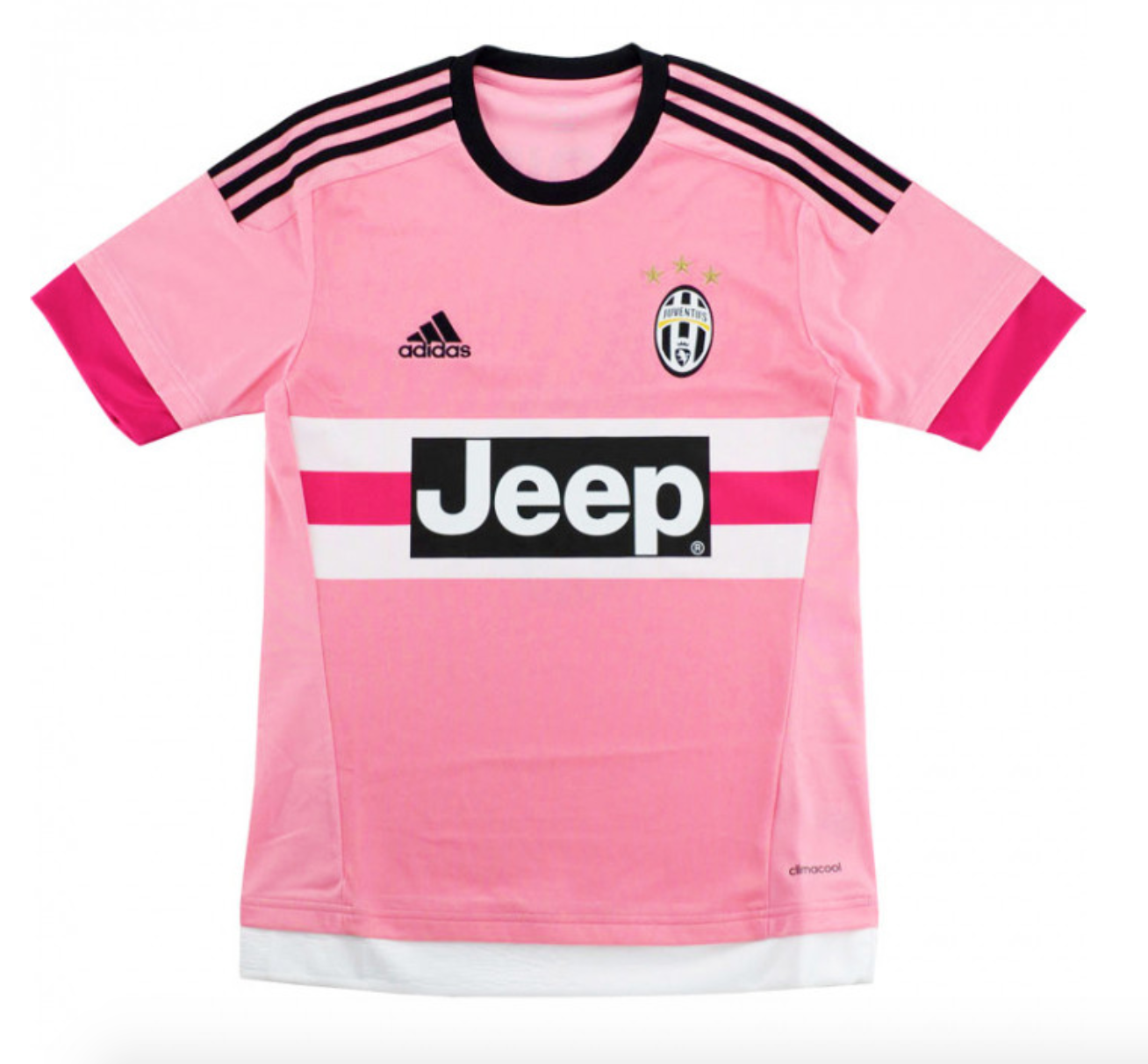 So much symmetry going down with this one. Along with the alliterative satisfaction you get from the Jeep x Juve branding, the car company’s black/white logo also resonates with the Turin club’s iconic colours, making this a match made in football heaven. Arguably the most iconic fit from the partnership so far is this Pink away kit from 2015/16, that Drake infamously stunted in on Instagram. 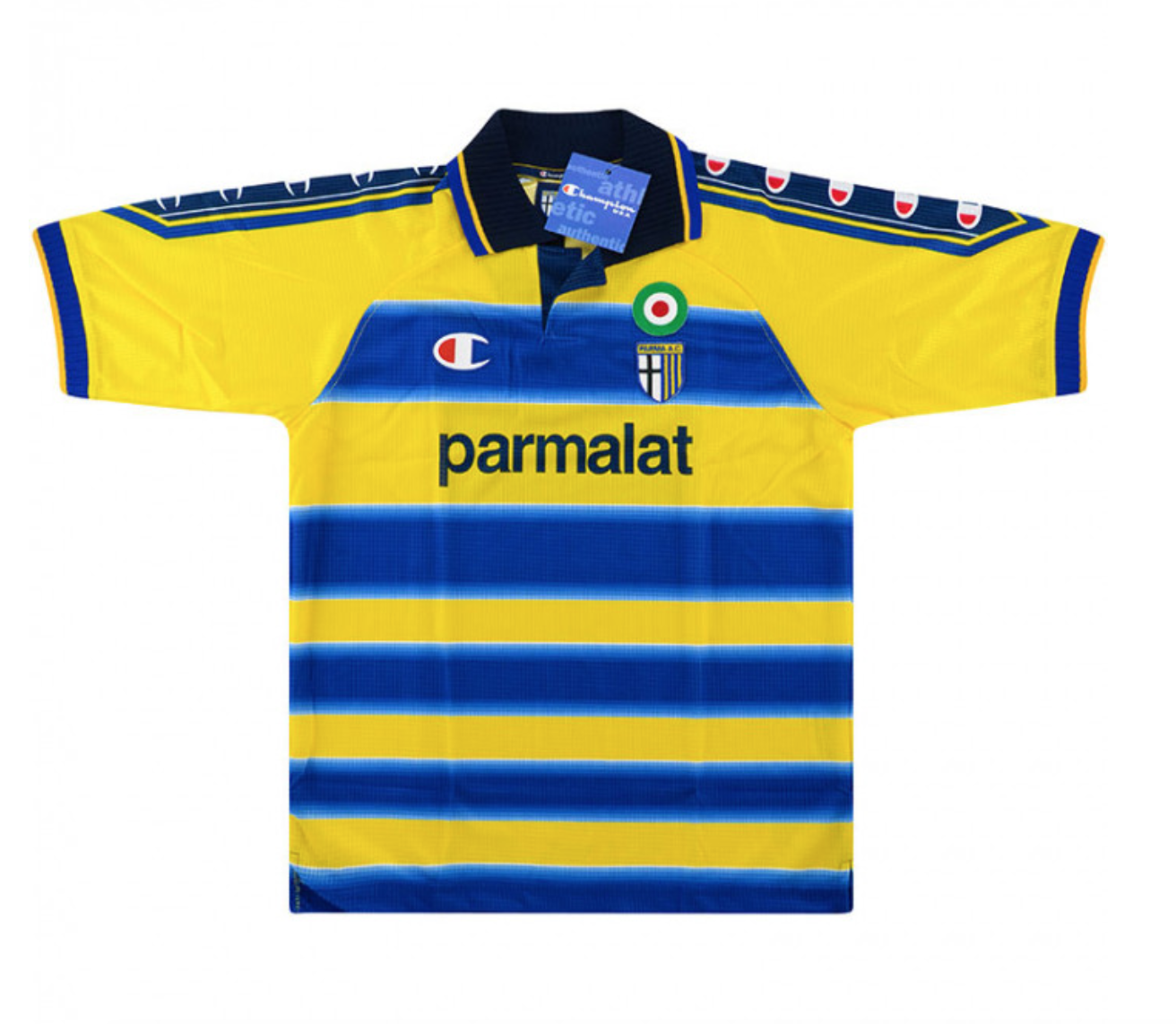 Zola, Crespo, Thuram, Buffon, Veron, Cannavrro and co all balled out for Parma in the Paramalat jerseys back in the 90’s – undoubtedly the best teams and shirts in the club’s history. Add Champion in as the shirt manufacturer, and you get one of the best looking kits of all time. Unreal. 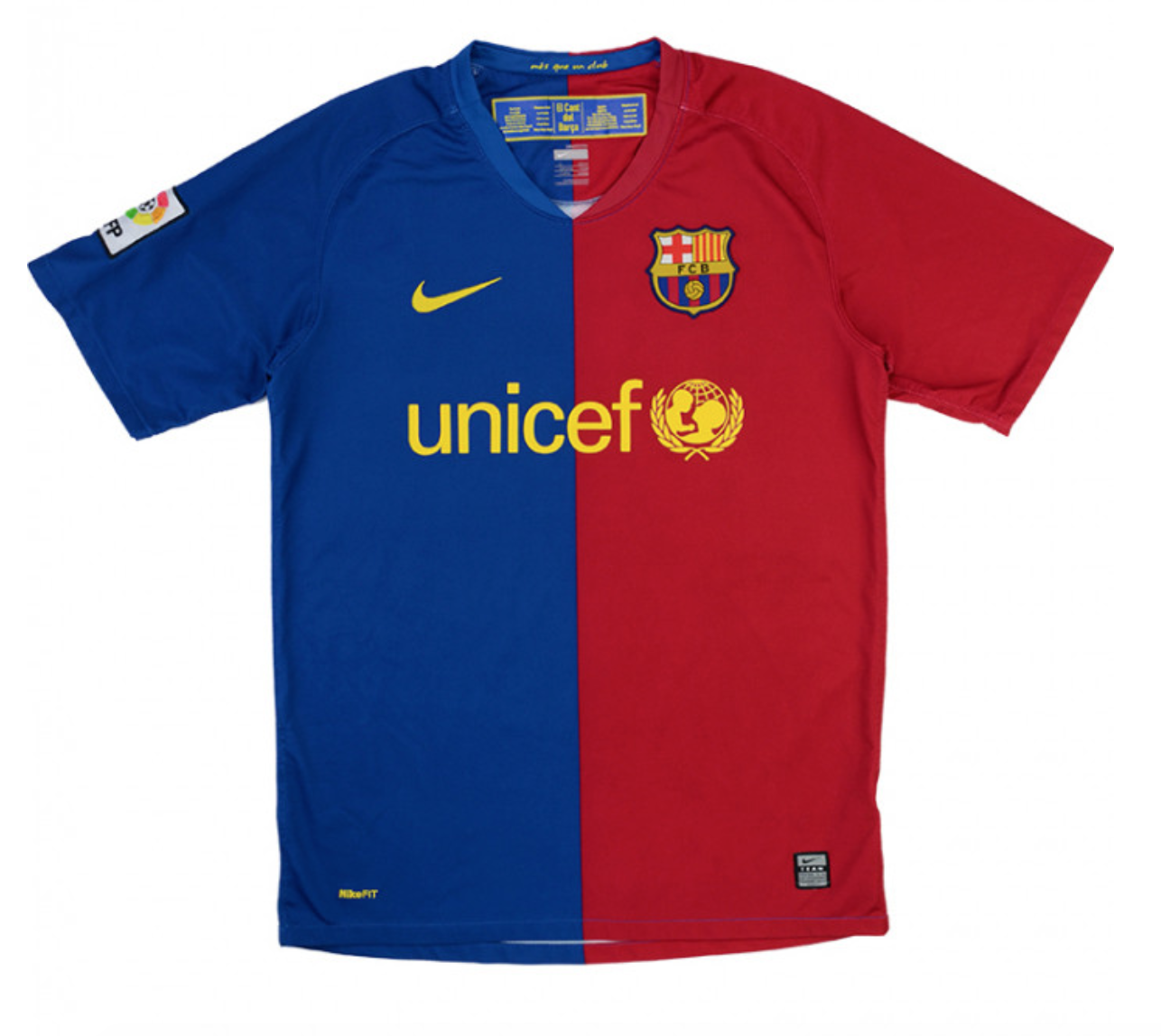 Barca and Unicef shirts: Mes Que En Dub. When Barcelona donned Unicef shirts under Pep Guardiola, they were arguably one of the greatest sides we’ve ever seen. The unprecedented era of dominance for the Catalan club also saw them contribute millions to several vital causes that Unicef supported in their ongoing partnership. 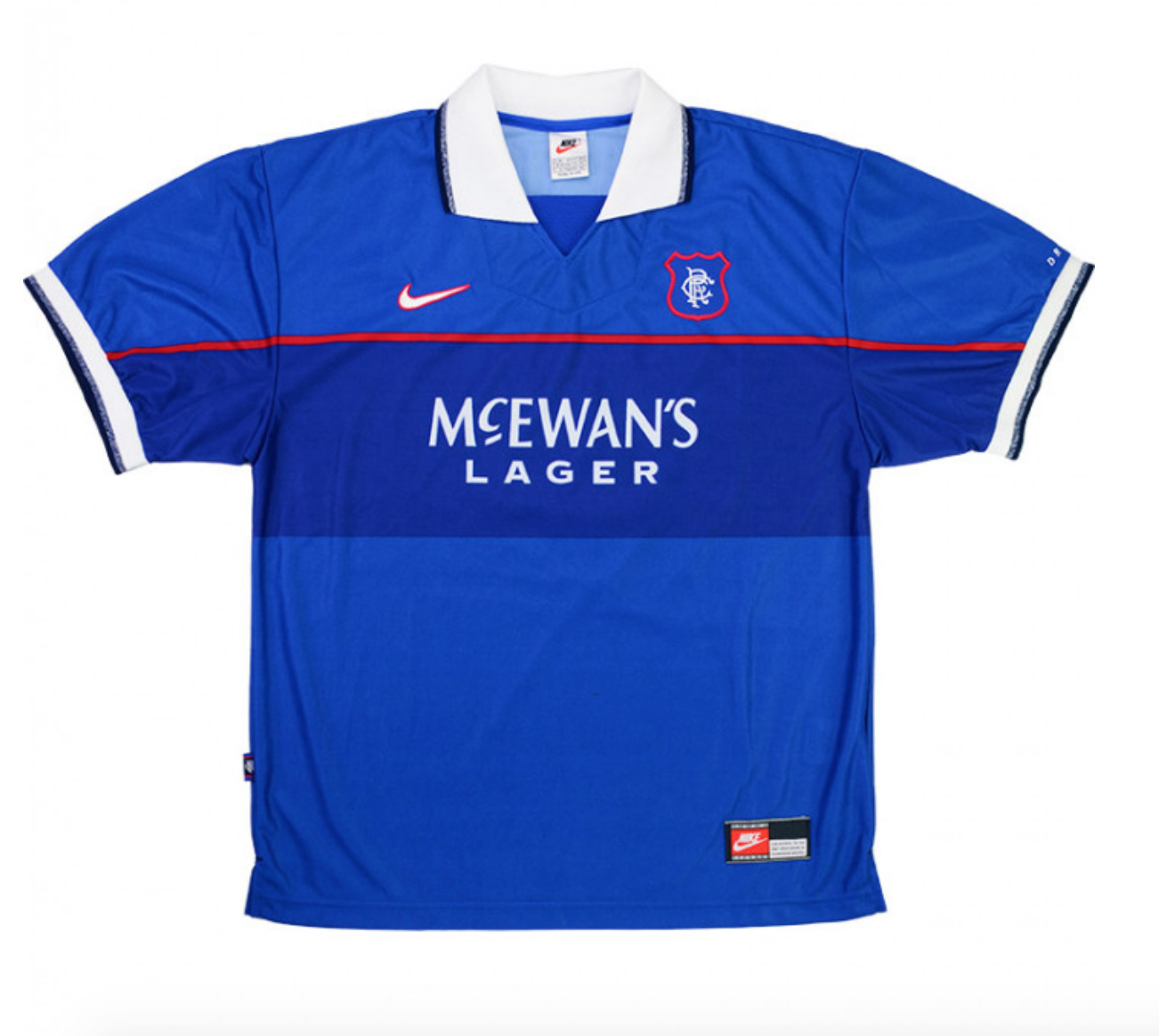 Class Nike kits, revered Scottish beer, and several legendary sides made Rangers’ McEwan’s partnership an absolute cult classic at Ibrox from 1987 to 1999. You just can’t imagine this sort of link up happening in 2020. 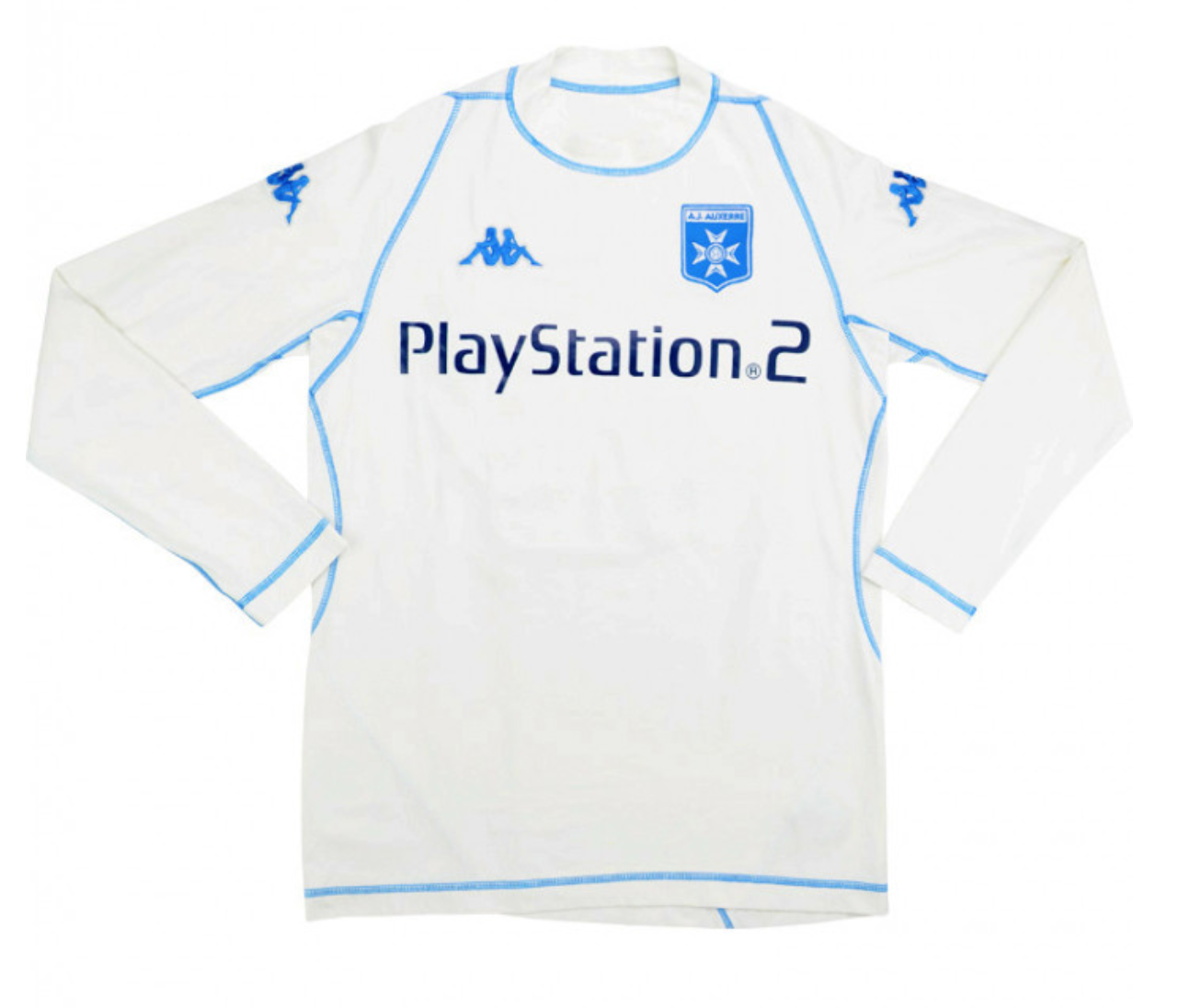 Djibril Cissé became renowned as a certified bagsman while donning PlayStation-sponsored shirts for Auxerre back in the early 2000s. Along with Kappa as the manufacturer, the Ligue 1 outfit looked as cold as the Frenchman’s finishing when he won the Golden Boot for the club back in 2001-2002. The partnership mainly focused on the PS2, undoubtedly the greatest console ever released. 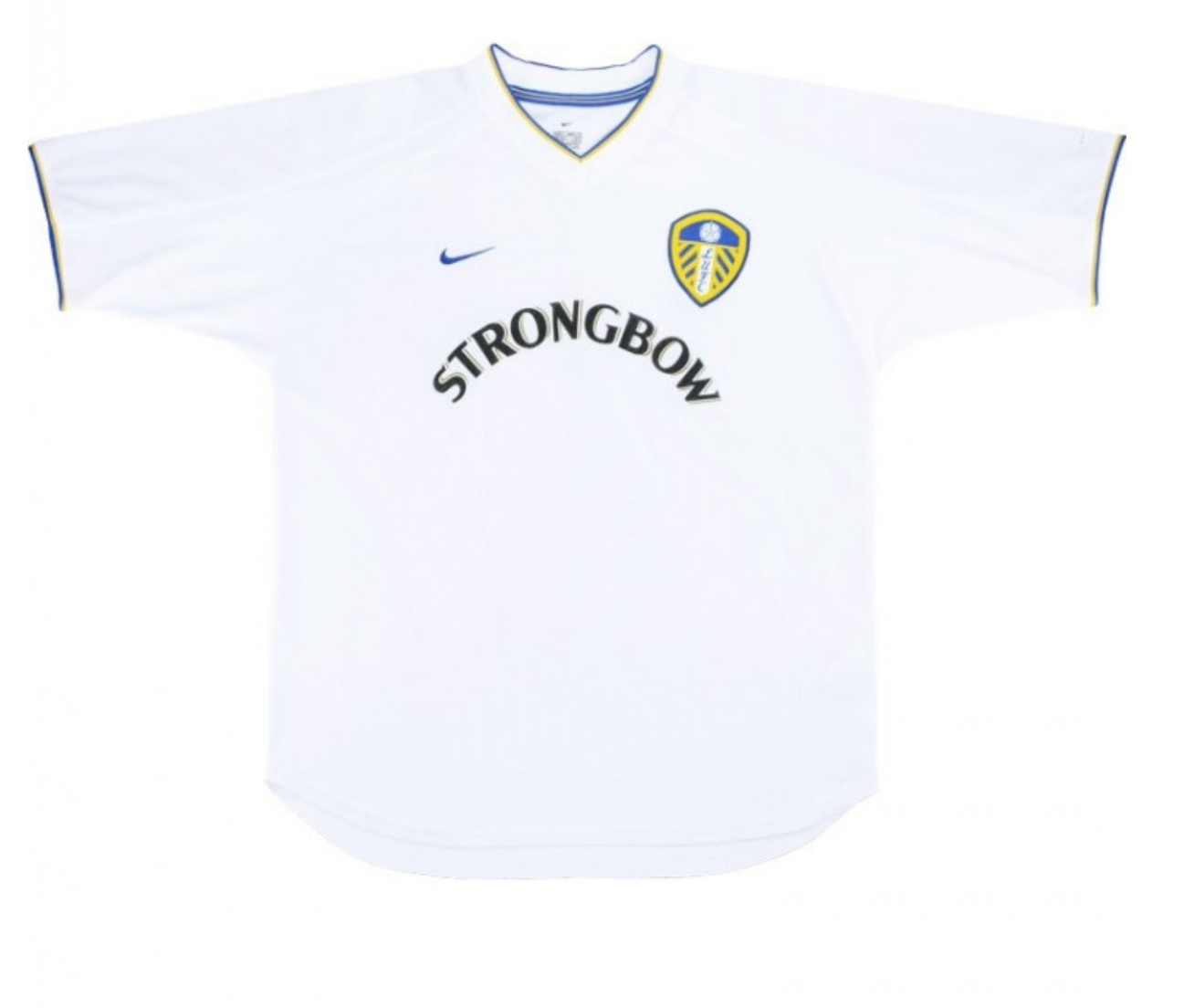 Strongbow is more associated with sauced-up sesh lords rather connoisseurs of drip, but when donned by the likes of Mark Viduka, Harry Kewell and Alan Smith at the turn of the millennium, Leeds stepped out looking the cleanest they’ve ever looked.