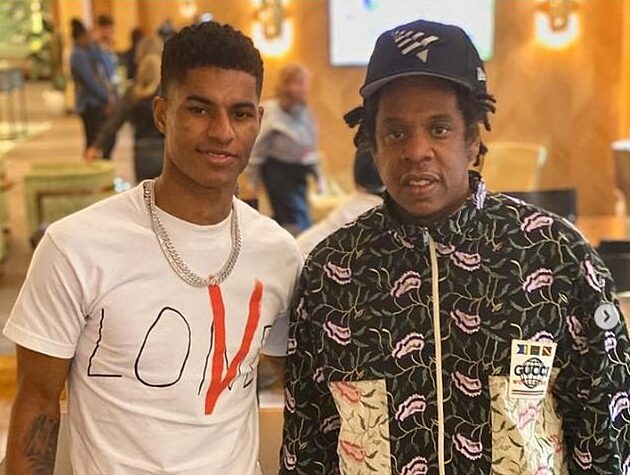 The Jay-Z-owned sport agency has long been rumoured to have been associated with Rashford, with the agency having reportedly approached him to represent him back in 2016. Now, the company have officially announced that they’ve represented the Manchester United baller since April of this year.

Announcing the news in a statement, Roc Nation said: “We can confirm that Roc Nation has represented Marcus Rashford since April 2020. The representation is strictly off-field, encompassing philanthropy, PR and marketing, communications, digital strategy and commercial partnerships. DNMaysportsmgt continue to represent Marcus Rashford for all on-field activity.”

The Manchester United striker cemented himself as one of the most influential ballers of any generation by changing Prime Minister Boris Johnson’s mind over providing free meal vouchers for under-privileged children during the summer holidays.

Roc Nation played a role in Rashford’s widely lauded efforts – with the striker having signed with the agency back in April. Jay-Z has said he’s “extremely proud” of the young baller for his efforts to change the lives of young people.

“We look for those figures who stand for something beyond just the sport that they play,” said Kelly Hogarth, the director of brand strategy and business communications, who represents Rashford.

“What he did transcended race, transcended any social unrest that we’re experiencing. This was a 22-year-old young man who was saying: ‘No child should be going hungry in this country. That is unacceptable.”

“And even if you were the meanest person in the world, it was an argument you just couldn’t fight against. He was able to resonate with so many people by just being himself.”