'Pitch, Please!' is a campaign from adidas, Powerleague and VERSUS that unlocked access to football for a new generation of players. Following the biggest summer in women’s football in history, we provided free pitch space to women, girls and non-binary players all throughout August – but the work doesn't stop here. As we count down towards the new domestic season in the women's game, we're linking up with some of the most influential grassroots communities in the game to talk about why it's so important for more communities to have somewhere safe to kick ball.

Baesianz FC might only be a few months old, but the London-based grassroots side are already making waves both on and off the pitch.

Starting life as an extension of the Asian art group, Baesianz – a collective dedicated to platforming the work of artists of Asian heritage – Baesianz FC provides a safe space for women, trans and non-binary people from Asian communities to celebrate the game they love, while also working tirelessly to make it an inclusive space for those who’ve been traditionally excluded from the ‘beautiful game’.

This summer, the Lionesses made history by winning the UEFA Women’s European Championship on home soil at Wembley. Grassroots teams like Baesianz FC will continue to build on that milestone moment by creating a legacy of their own. One that ensures those of Asian descent will be supported and championed through football.

VERSUS linked up with co-founder and artist, Nicole Chui, plus her teammate Bellara Huang, to discover where their love of football stemmed from, why representation is so important, and what the game needs to do to get more people accessing football pitches. 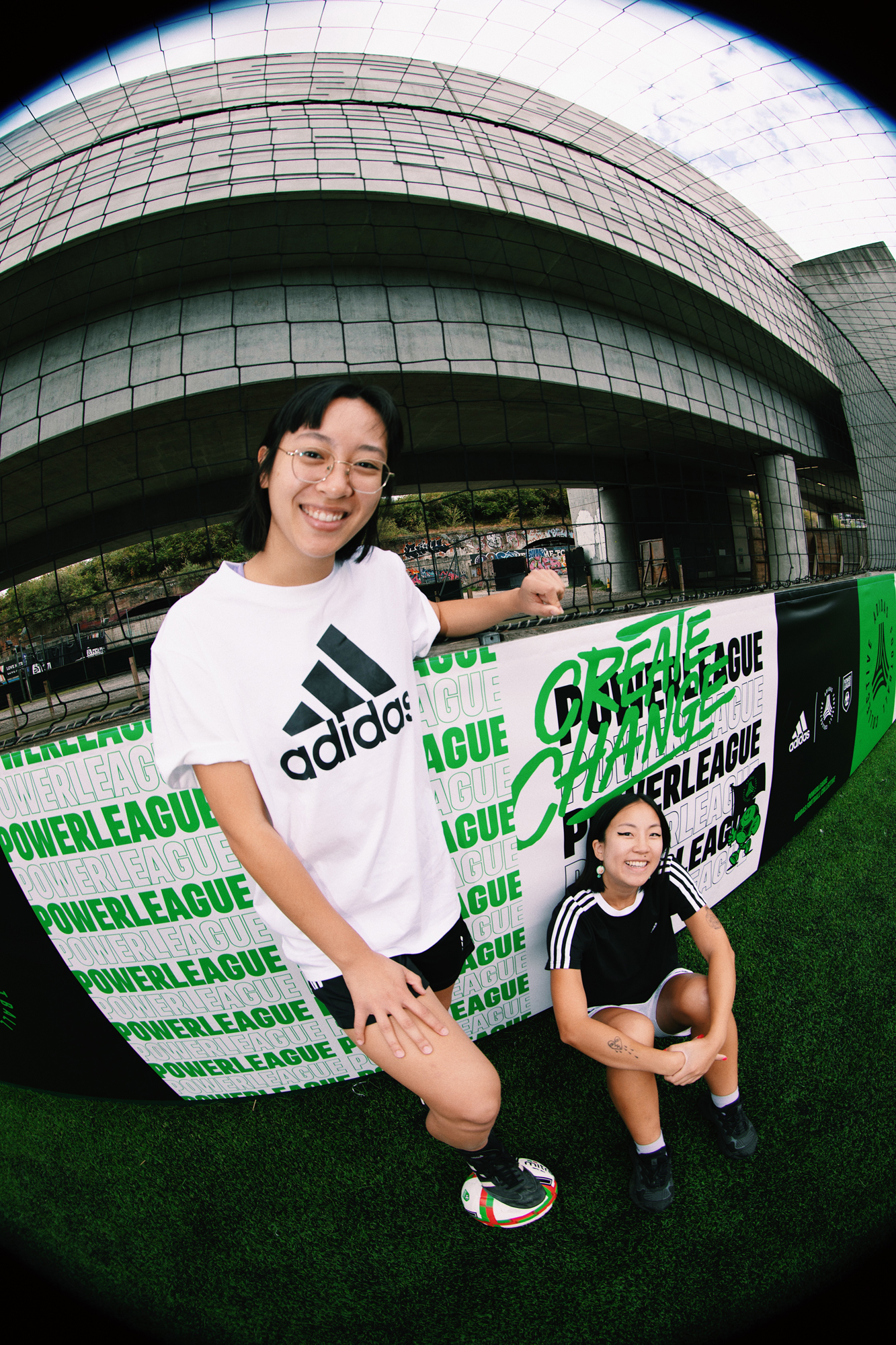 VERSUS: Where did your love for football come from?

Bellara Huang: I’m originally from the States, and only in the past couple of months have I really come ‘back’ to football, but before then, I started playing when I was around five-years-old – mainly because my parents wanted me to have a hobby where I could exercise at the same time!

Football was the only sport that was accessible to me growing up, and despite starting out at quite a young age, I didn’t really fall in love with it until I was in my early teens. Around that age you sort of understand the wider benefits of playing a sport like football too, like the social and communication skills you develop from playing a team sport for example.

And you continued to play football all the way through your adult life as well?

BH: I actually fell out of love with football during my University degree…

What happened for you to lose your love of the game?

BH: While at Uni I was playing football until my second year of studies, and at that time I was playing at a semi-professional level… 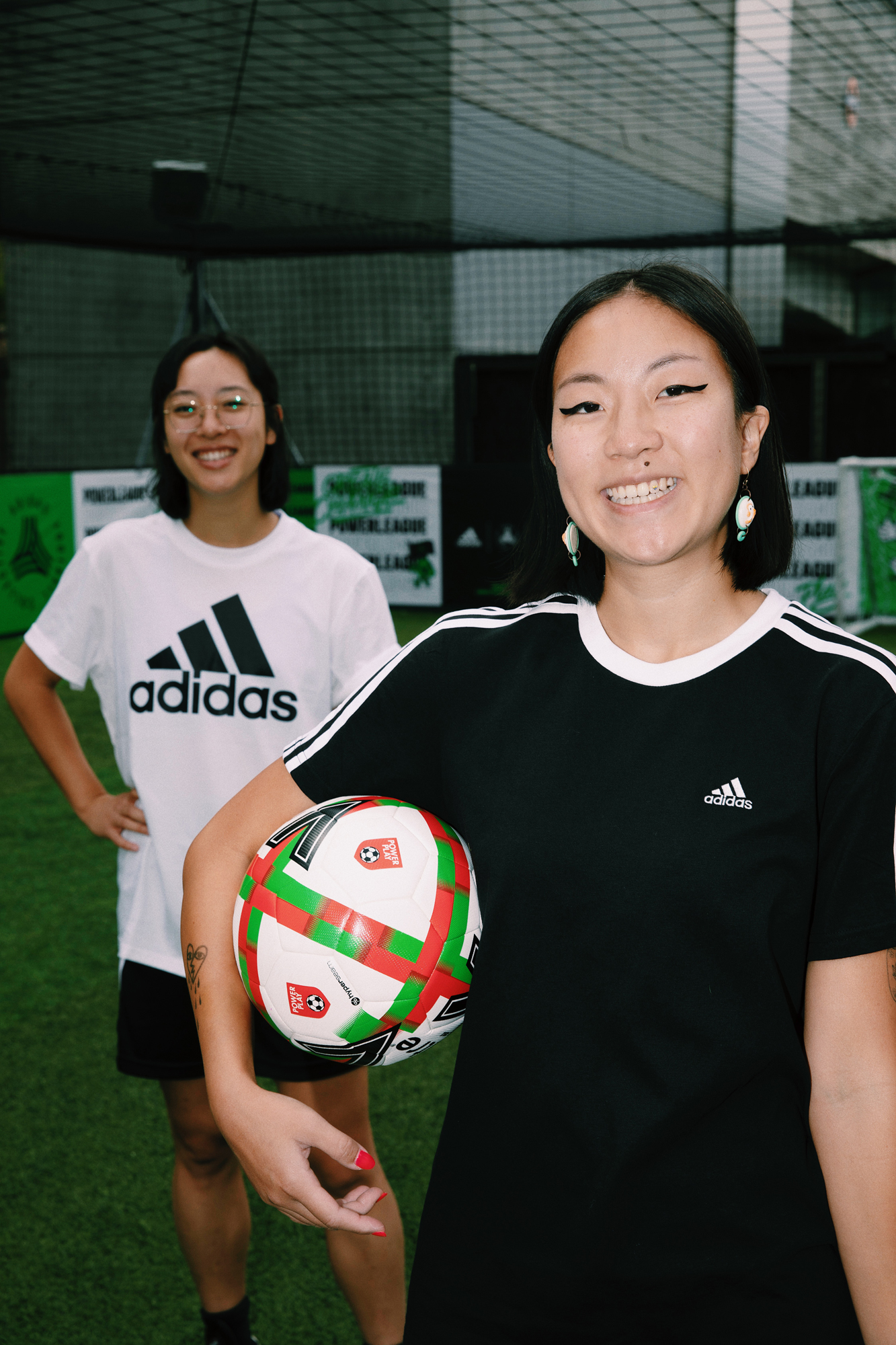 Oh, so you’re an absolute baller then?

Nicole Chui: I can confirm: Bellara is a total baller! The first time I saw her play I was like “wow, okay, she knows what she’s doing”.

BH: That’s very kind of you! I’m just really enjoying the game again, and that says so much about the space you’ve helped to create with Baesianz FC.

Is the environment you play in now totally different to the one you experienced while at University?

BH: Completely different. The level of intensity and competitiveness between players at Uni was quite a lot to deal with. The team environment wasn’t one that fostered teamwork, instead it often felt like players were happy to pull one another apart as opposed to lift one another up. I found it quite a difficult space to be in, so that’s the main reason why I stopped playing.

What made you then decide to put your boots back on?

BH: Moving to London and finding non-institutional grassroots places to play football. That’s when I rediscovered how much I enjoyed the game! I feel super comfortable just having a kick-about with my friends nowadays. 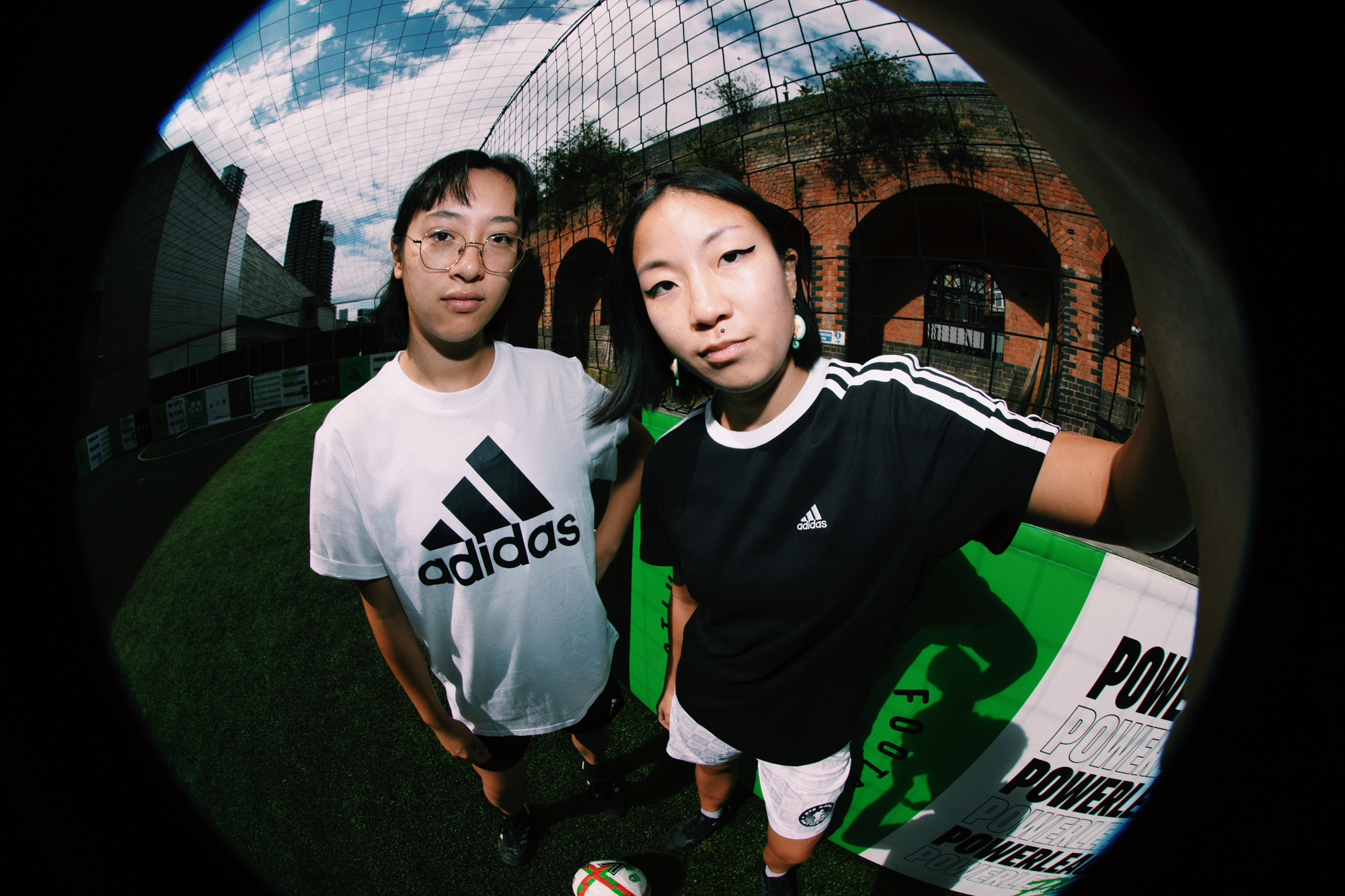 Where did your love of football come from Nicole, and why did you decide to create Baesianz FC?

NC: I was sort of forced into playing football by my dad when I was about eight-years-old – he wanted at least one of his daughters to play the game he loved! And my first experience of football was playing on a mixed team after-school and at the weekend. I remember getting really into those Saturday games! A little later in Primary School we started a girls’ team. At first it was just me, then a few other friends joined until eventually we had enough players to form an A and B team…

So, even before you created Baesianz FC, you were creating football teams as a kid?

NH: I’ve never really thought about that before, but…yes! All the way through Secondary School I continued to play football, and it wasn’t until I moved to London and started studying for exams and went to Uni that I stopped.

What were your reasons for stopping?

NH: I just couldn’t see any progression for me in the sport, and thought I needed to spend more time focusing on getting into Uni. Around that age I knew that I really wanted to work in fashion too, and so everything went into making that dream become a reality.

In all honesty, I also just didn’t see any women working in football – especially any women who looked like me either. I didn’t know anything about the industry so didn’t ever really consider it to be a suitable profession. So, I just stopped playing until 2019.

That year the Women’s World Cup happened and coincidentally I joined a grassroots team called Victoria Park Vixens, and that’s when I re-entered the world of football.

How long after did you form Baesianz FC?

NH: Baesianz is only a few months old, so earlier this year. I just always wanted to have a community where Asian women, non-binary people and trans people could access a safe space and play football – I always felt like that was lacking. When I started, there were just a few of us who’d turn up to training but I knew in my heart of hearts that there were more of us out there.

The representation of Asian people from different Asian heritages is still quite lacking in British football. 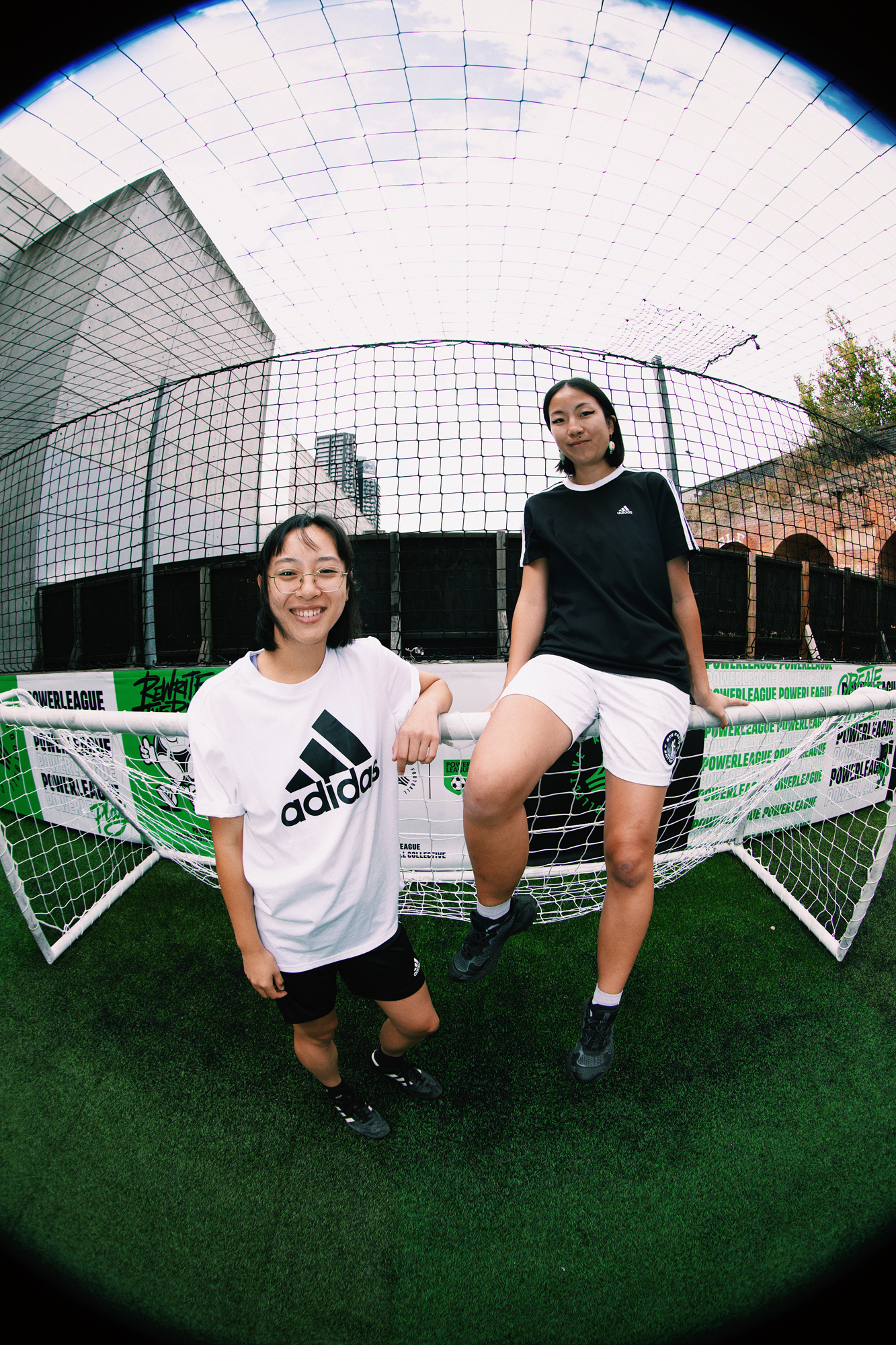 The notion of ‘community’ and belonging to a space that’s truly representative of who you are, was that important to you Bellara when rejoining the football world?

BH: Yeah! And I don’t think I’ve ever told you this before Nicole, but I was following Baesianz FC on Instagram quite a while before I plucked up the courage to attend a session.

When I moved to London – this time last year – I was actively seeking community through so many different ways, and of course one of those ways was social media. As time went on, I heard more and more about the team – and of course Nicole – and so I decided to finally join.

I was welcomed immediately! And for me, it was never really about scoring goals, it was about becoming friends with the people I was playing with every week.

NC: It is such a fun space, but it also provides opportunities for us to learn about Asian culture, and how diverse it is within itself. We don’t just have East and Southeast Asian players, we also have people with North, South and Central Asian heritage.

There’s so much richness within Asian culture and history, and it’s a really beautiful thing to be able to bring that together through football. It’s been amazing to hear about people’s diaspora experiences too. Just being able to provide a safe space for people to share these stories, thoughts or feelings is really special.

BH: It’s great to be able to learn about other people’s upbringings and experiences, but we are also coming together to quite literally become stronger – physically – too. Football is a vehicle for that amongst the community.

Despite the evident successes of creating a team like yours, there must have been barriers along the way, pitch space for example. Has that ever been an obstacle for Baesianz FC to overcome?

NC: At the moment we train on open fields or in local parks, and we can do that during the summer months because it’s lighter and because of the numbers. In September we’ll be joining a league, and from then on the nights will get darker and so training in those summer spaces is no longer a realistic option. Hopefully, we’ll have more people with us then too – we’ve entered a league because the demand to do so is there!

And for a small, newly established team like ours, it’s quite difficult to access and book pitches. The more well-known grassroots teams, they’ve been doing this for a lot longer than us so already know where the best rates are when it comes to booking pitches. And of course you have the old-age problem of block booking. 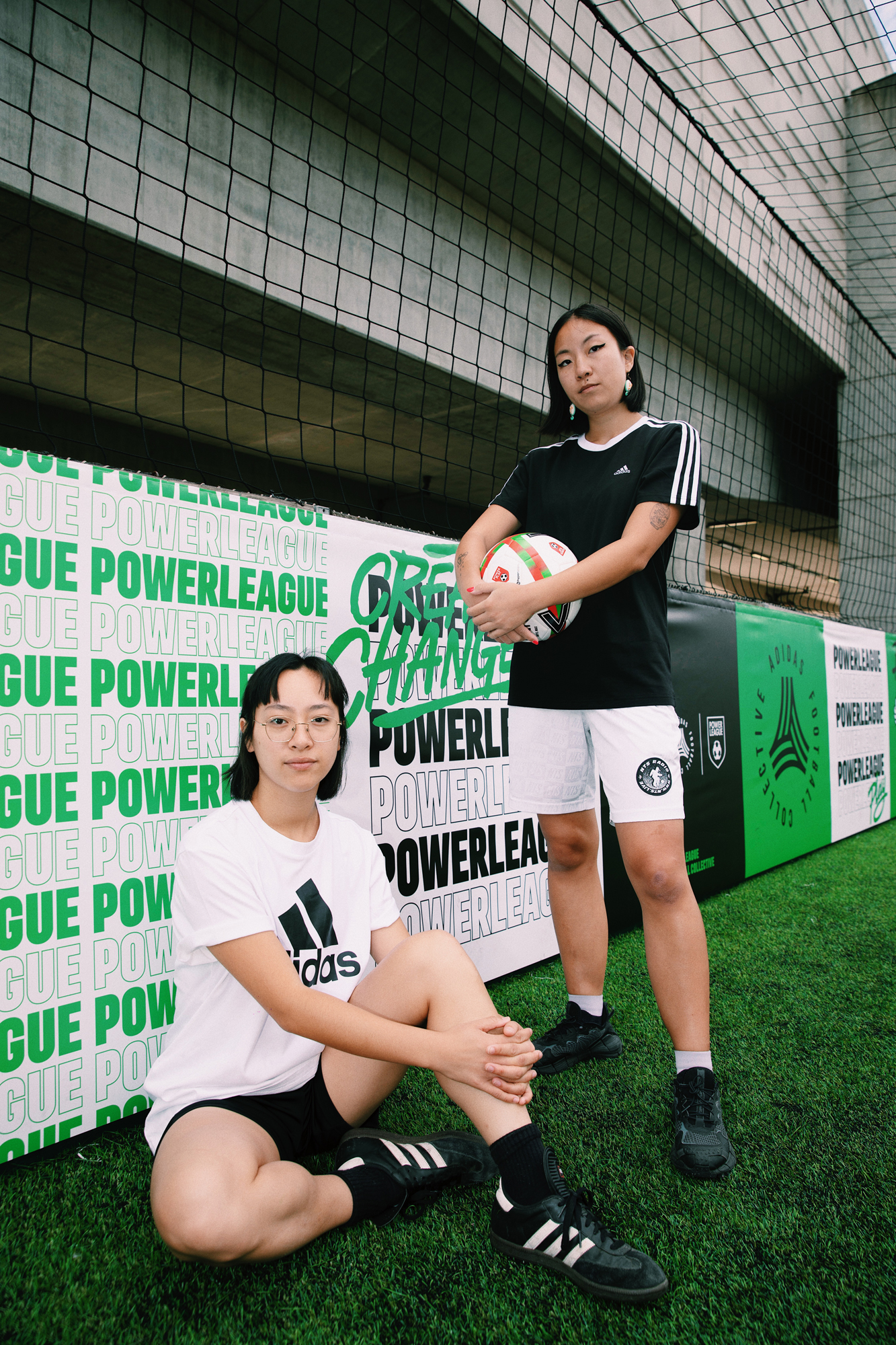 Where most – if not all – of them are reserved for men’s teams?

NC: Exactly. They tend to select and get given the more ‘suitable’ time-slots too. Mid-week, just after work. Nobody wants to play football or train at 9pm or 10pm at night. Those teams more often than not are work-based teams, which means they can afford to pay more for pitch space. At the moment, we can’t afford to pay for those spaces.

The issue we have at the moment playing in open spaces, is anyone can watch you and sometimes, people randomly decide to set up their own game during yours! That’s happened to us recently, we’ve also experienced men ‘creeping’ around our training sessions and in some instances even following people afterwards. It’s totally disrespectful.

BH: From a brand’s point of view, providing equipment like balls, boots, cones…essentially all the basics you need to train or learn how to play the game, that would be really helpful. It removes a barrier associated with cost.

NC: When it comes to accessing pitch space, prioritising slots during earlier times after work like 7pm-8pm for instance – it’s not fun to have to worry about going home at 11pm at night when lights immediately turn off and you can often have men harassing you as you walk home.

I also think the facilities onsite – toilets and changing rooms for example – should come with working locks. That would make the atmosphere feel a lot safer. Nowadays more and more places are providing free sanitary products, it’d be great if pitch space facilities could also do the same.

Do you think rolling out initiatives like Pitch, Please! during the winter months would also be beneficial? Would it encourage players to keep playing the game all-year round as opposed to only in the summer months?

NC: I think so! It also guarantees safe spaces for people to play football.

For more information on how grassroots teams are pushing football forward, visit the adidas Football Collective.