In ‘What Ballers Wear’, we link up with the most exciting players in the women's game and catch a vibe with them while they dive into their wardrobes before flexing their coldest fits. In our next instalment, we meet up with European Champion and Manchester City icon: Lauren Hemp.

Lauren Hemp. A name now known by every England fan up and down the country.

Ian Wright, Karen Carney, Emma Hayes. They all sang Hemp’s praises during last summer’s UEFA Women’s European Championships. In fact, they were giving the Manchester City winger her flowers long before she stunned the world with her blistering runs and mesmerising dribbling at Wembley. At just 22-years-old, the European champion’s name strikes fear into defenders across the continent. When we asked what’s next on the horizon, her response was simple: “To do the same at next year’s World Cup.” The girl from North Walsham in Norfolk might have been granted Freedom to the City of London, but that isn’t enough for this baller. World domination is on the cards for this former Young England Player of the Year. England teammate Beth Mead might have been beaten on the final whistle at this year’s Ballon d’Or ceremony, but best believe Hemp will no doubt be on that stage herself in years to come.

The future really is limitless for one of the brightest sparks in English football.

VERSUS sat down with Hemp for our next instalment of ‘What Ballers Wear’ to find out how she defines her own style, how she feels about being a role model and whether that Euros victory has finally sunk in. 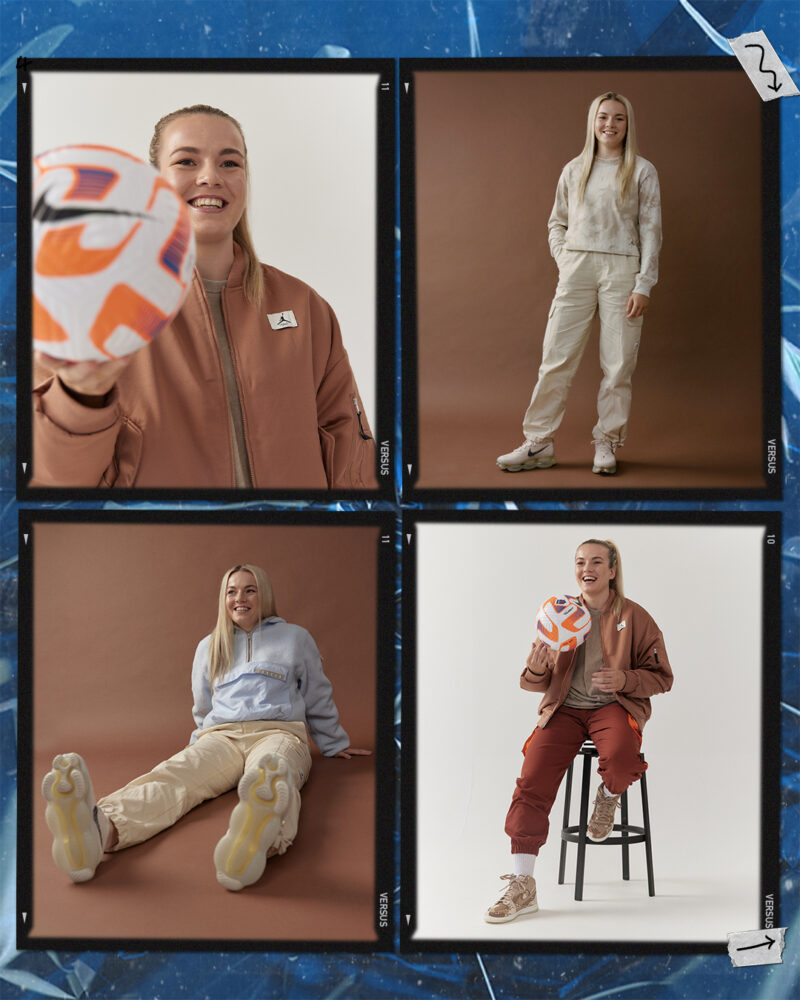 For our fourth ‘What Ballers Wear’ feature, we met up with Lauren Hemp in Manchester, a city that’s become her second home over the last four years or so. “I can’t actually go many places in Manchester without getting noticed nowadays” she tells us when asked about living in what’s arguably one of the most football-mad places, ever. “I feel like I have to put makeup on just to go to the Trafford Centre!” Something Hemp clearly isn’t quite used to, and something we thought might have to do with winning the Euros earlier this year. “As a result of that tournament, we (players) – and women’s football generally – have a much bigger audience. It’s still crazy to hear and meet people, sometimes celebrities, who are massive Lionesses’ fans,” she explains before stopping briefly to look out the window. “Oh look…you can see the Etihad from here!” And you can. Our studio is about a five minute drive from one of England’s biggest and brightest stadiums – a place where Hemp now trains week in, week out.

Since 2018, Hemp has played for one of football’s most developed women’s teams, Manchester City. During her time with the Cityzens she has won both the FA and Continental Cup, as well as securing four consecutive PFA Young Women’s Player of the Year awards – the most any player has ever won. Add those to her FIFA U20 Women’s World Cup bronze medal, Arnold Clark Cup trophy and of course her European Championship dub, there’s not much else for her to win. Or at least, some people might think so. “I think winning the Euros has just about sunk in,” she explained whilst admiring the stitching on the burnt orange Jordan Flight Renegade bomber she’s selected for one of her fits. “Every single player who grows up in England dreams of playing and lifting a trophy at Wembley, but for it to actually happen, it’s something else.” We tentatively ask her “what’s next?” after achieving something so many have dreamed of, and we get an answer we should have come to expect from someone simply determined to win. “To do the same again at next summer’s Women’s World Cup.” 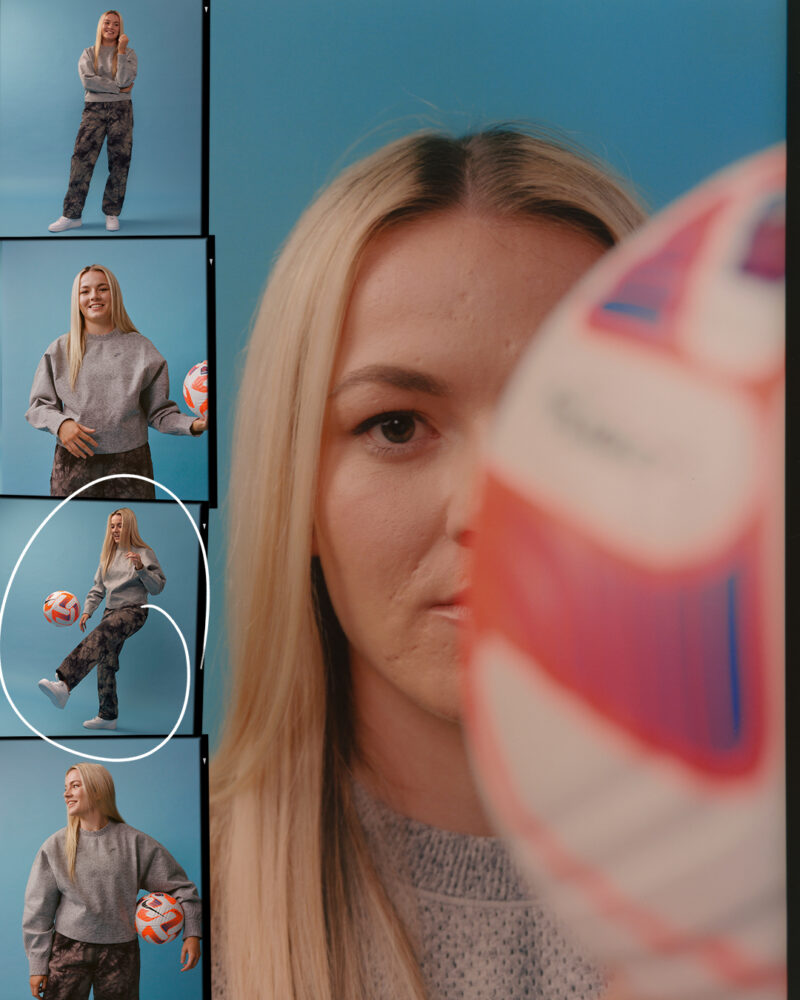 Hemp might only be 22-years-old but she has the outlook of someone who’s been in the game for decades. “I know I’m still quite young, and I’m talking about winning the biggest competition in football, but it’s something that we all want as a team. And when we want something as a team, we work hard to make sure it happens.” And she’s not wrong. The Lionesses have continued to set new records under the stewardship of Sarina Wiegman since the 2017 Euros winner and 2019 World Cup runner-up joined the squad as manager last year. In 26 games, Wiegman’s helped England to win 24 and score 120+ goals. She has also added two pieces of silverware to the St George’s Park trophy cabinet and helped to turn Hemp into a household name, something the youngster is still trying to get to grips with.

“When I was younger, there weren’t really many women’s footballers for me to look up to. I couldn’t watch any matches on TV like we can today, so a lot of those players were really inaccessible to me and my friends. So to be told I’m a role model to young players today, it’s crazy.” When asked if there’s anyone she plays with who she might consider to be a ‘style role model’ she smiles. “I mean, I know she gets this a lot but, Leah Williamson. I really like her sense of style, the same with Lucy (Bronze) and Keira (Walsh). For me, I like to be really comfortable in what I’m wearing, and I think all three of them are the same. They’re confident because they’re comfortable, and that’s something that I really like.” We tell Hemp that Walsh featured in our ‘What Ballers Wear’ series earlier this year, and spoke about how her fashion style sometimes reflects her style of play. “I’m not sure mine does,” she says whilst picking up a pair of the Nike Air Max Scorpion Beige and complementing them with a Sky Blue Jordan 3/4 fleece. “I’m more bold on the pitch than off it! And because of that I’d say the way I dress is a little more ‘subtle’. 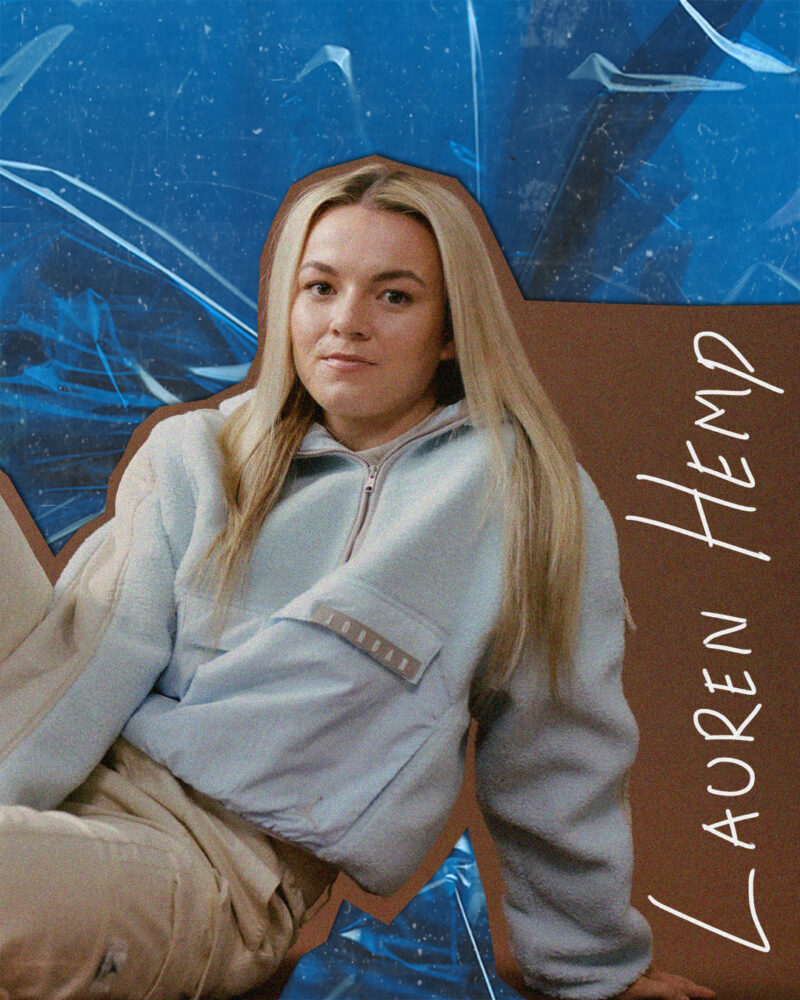 “I like to wear black and white, and my favourite Nike silhouettes are Dunks – you can’t go wrong with Pandas, can you? But that being said, I always choose bright colours for my football boots!” We’re a little shocked when we hear that Hemp prefers a monochromatic style palette considering she’s picked a pair of Nike High Desert Camos and tie-dye ACG trousers ahead of our link-up. But, there’s no denying Hemp’s expression on the pitch, paints a picture full of colour and vibrancy – hence the almost luminous Mercurial boot choices over the years. “I’m more confident on the pitch, it’s where I can totally be myself,” she tells us when we ask why she might be a little more adventurous when kicking a ball. “I just feel at home. Being a footballer you have to be brave and play freely and maybe that’s why I prefer having yellow, orange or whatever other eye-catching colours I can have for a pair of boots!”

For our final outfit change, Hemp dons the Nike Forward sweatshirt – a piece that champions the power of sustainability due to its use of recycled materials and lower energy processes. The future of clothing meets the future of football. “Like I mentioned earlier, I didn’t really have role models in the women’s game growing up, but I do remember thinking Kelly Smith was amazing. “I want to be like her! She scores loads of goals!” is something I said when younger. And to be honest, scoring goals is something I still aspire to today!” Smith might have influenced Hemp’s style of play in front of goal when first starting out, but this young baller has worked hard to find her feet in the big leagues. 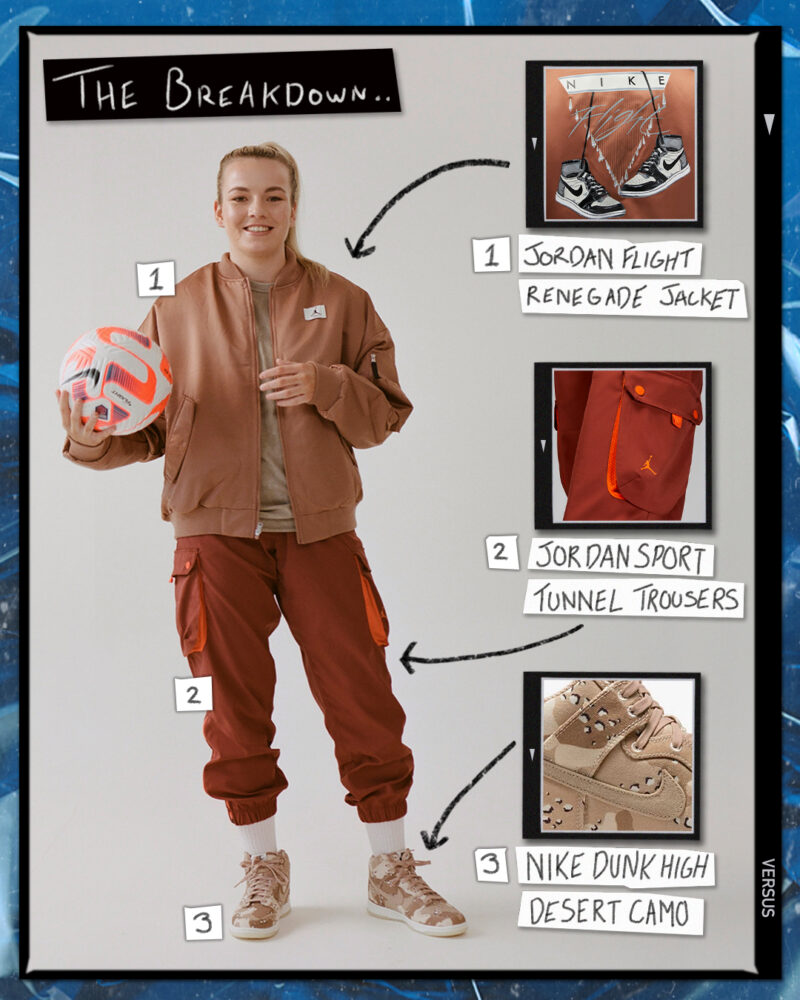 Before packing up for the day, we touch base with Hemp one more time and have a quick scan of the photos Lily Brown has snapped. “They’re really nice!” Hemp says, a little surprised. Despite being one of the most self-assured players on the pitch, there’s a reserved nature to Hemp – some might even say ‘shy’ – that is a little surprising when first meeting her. Perhaps a trait many wouldn’t associate with a generational talent like Hemp, but it’s her quiet nature that makes you want to sit down and get to know her better. And she’s generous with her time, wanting to answer every question as fully as possible. Quite simply, Hemp wants to make sure everything she puts her name to is the best it can be. The sign of a true winner.