PUMA just threw the ultimate warm up party to celebrate the launch of the new football season, linking up with three of the biggest names in grime to shut down LDN 19 for the big Premier League kick off.

With PUMA’s music-themed ‘Anthem Pack’ making its on-pitch debut in the past weekend’s opening round of fixtures, P Money, Novelist and Logan Sama descended on central London for a grime takeover to create the type of noise and hype that wouldn’t look out of place in the terraces.

The event was part of PUMA’s new ‘Find Your Flow’ campaign, celebrating the skill and personality that singles out the great from the good – a message that resonates in both football and music. The event kicked off with a killer set from Jossy Mitsu, before Logan Sama hosted a panel with Novelist and Leicester City star James Maddison that saw the baller speak about the upcoming season, who runs the dressing room playlist, and his eclectic music tastes.

Once the panel ended, Novelist and P Money stepped on the mic and shelled down LDN 19 with a high-energy set that saw two of grime's most lyrical artists go bar-for-bar. The set was reflective of the passion, fight and power that you see instilled in players on a match day through the energy of music, crowd chants, and anthems.

As a grime original with one of the most celebrated flows in the scene, we spoke with P Money – as he stepped out in PUMA’s RS-X Tech Motorola sneakers – to get his hot takes on the new football season, why South London is taking over right now, and how he first found his flow. 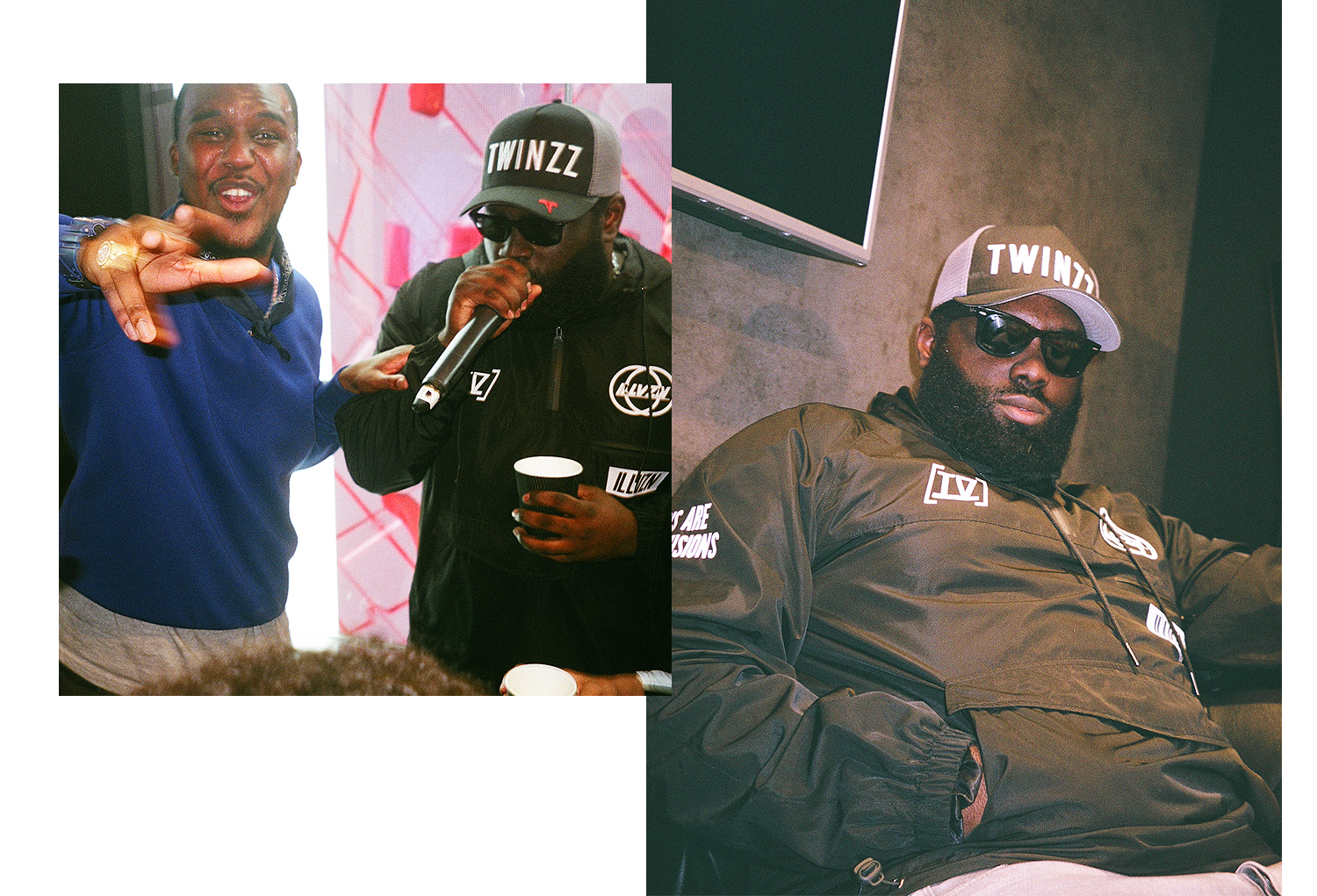 VERSUS: You’re performing at a PUMA Football event tonight and the new season has arrived! How excited are you for the big kick off?

P Money: I’m excited for everything! Obviously I’m an Arsenal fan and I’m excited because we’ve made some signings in key areas, which I think we needed, and you always want more but I’m pretty happy – it’s been one of our biggest windows in the last ten years, definitely.

How are you rating David Luiz coming over? That was a mad move…

I’m sceptical! Do you know why, yeah? I always feel like anyone we get from Chelsea is a double agent – I always think they’re tryna destroy us from the inside, we’ve had too much history (laughs). It’s weird that all of a sudden he wanted to come to Arsenal but we’ll see what happens – he’s good with his feet and everytime needs players that can make things happen.

How big is football in your day-to-day life?

I feel like football is with me everyday – I play FIFA all the time and I still play five-a-side now and then with KSI and Jme. But yeah I keep up with my team everyday, I wake up and Sky Sports News is on straightaway, I need to see what’s going on at the start of every day…even if it’s not Premier League stuff, I’ll watch everything all over Europe.

How much do you think football has influenced your work? You’re probably one of the first MCs to really go heavy on lyrics inspired by football players.

I was playing football before I got into music so from the beginning it’s inspired ideas for lyrics and what to talk about when I’m on the mic. I respect and take inspiration from all art and football is an art in my eyes – I’ve always used it where I can. It’s such a good reference point for fans too, you can relate to so many people by writing a lyric about a particular team or player. And the players themselves are rating what we’re doing too, which is sick. 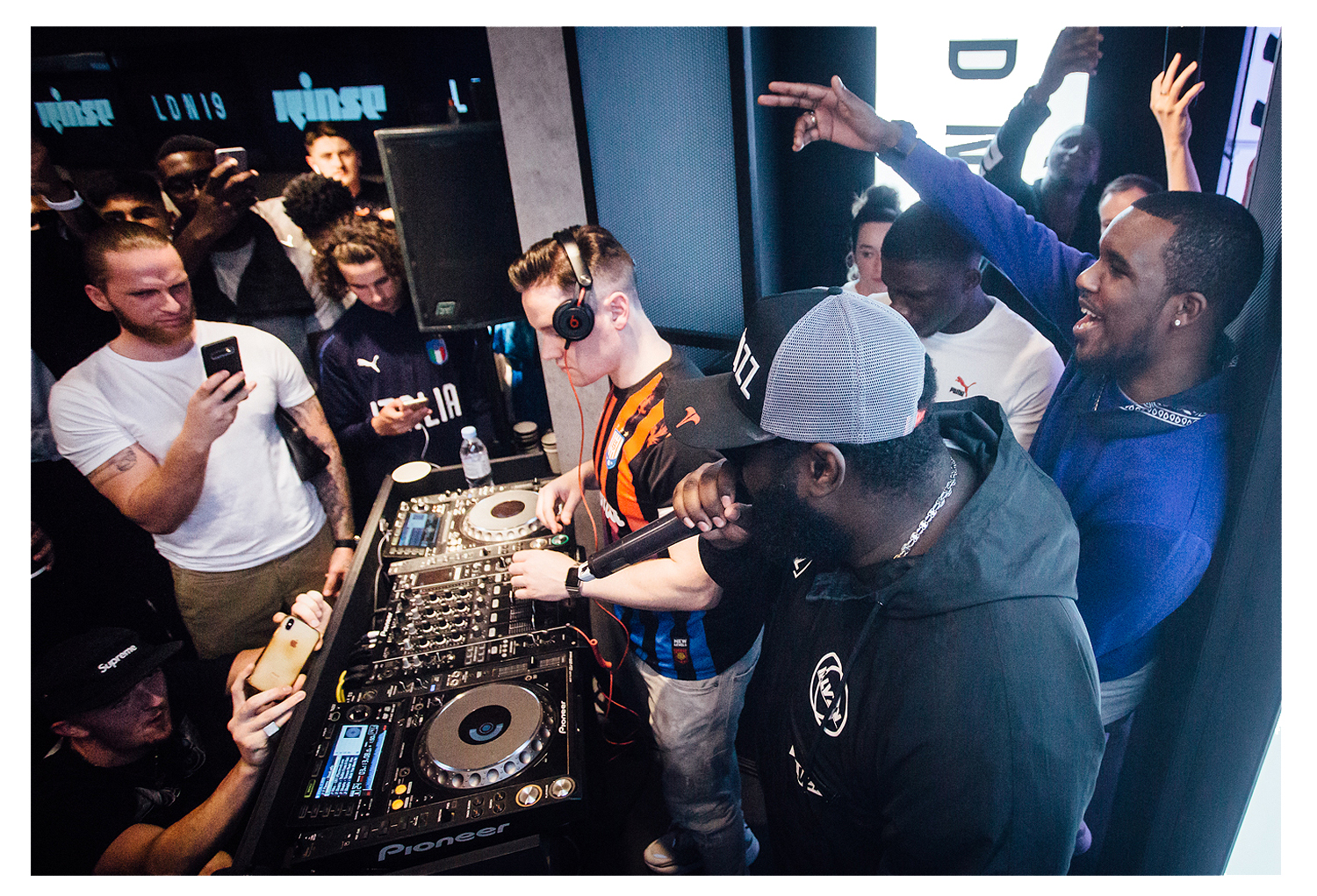 Who do you think drops the best baller-inspired bars? Yourself, Headie One and Don Strapzy have got to be contenders…

I’ve got to say Don Strapzy is sick with it! I’m not just saying that because he’s from the same place as me, he is actually sick. Also Little Dee – he’s in my crew – and we did a track called ‘Back Again Freestyle’ and the whole thing is just about mixing lyrics with footballers, and I felt he outdone me on that one.

For the recent ‘Anthem Pack’, PUMA linked up with some big ballers to drop their own playlists on Spotify. If you could curate a playlist with any player, who would it be?

It would probably be Jesse Lingard, you know – I just feel like he listens to loads of music! He’s always got music on his Instagram and stuff, I think his knowledge of the scene is probably quite decent so he’d be good to chat through stuff with. I’d be very interested to hear what Sancho listens to, I’m a fan of Sancho…

I mean you’re a South London guy and Jadon Sancho is repping that part of London huge right now! How do you feel seeing players that came from the same place as you making such an impact?

I keep an eye on players from south all the time, all the time! I actually grew up with Bradley Wright-Phillips and I know Shaun (Wright-Phillips) so obviously I’m a big fan of those guys too. There’s Ian Wright too, obviously, he was a big hero of mine. We always have debates about who’s got the best players, North London or South London, and I think South London has been winning for a while now!

But yeah Sancho especially, he gets me so excited. I’m very interested to see if he’ll come back to England and who it will be with – I honestly think another year and it could be Barca or Madrid that come calling and we don’t see him back here at all. I think he’s going to be an amazing player, especially for England as well, he’s someone that our national team has needed for a long time. 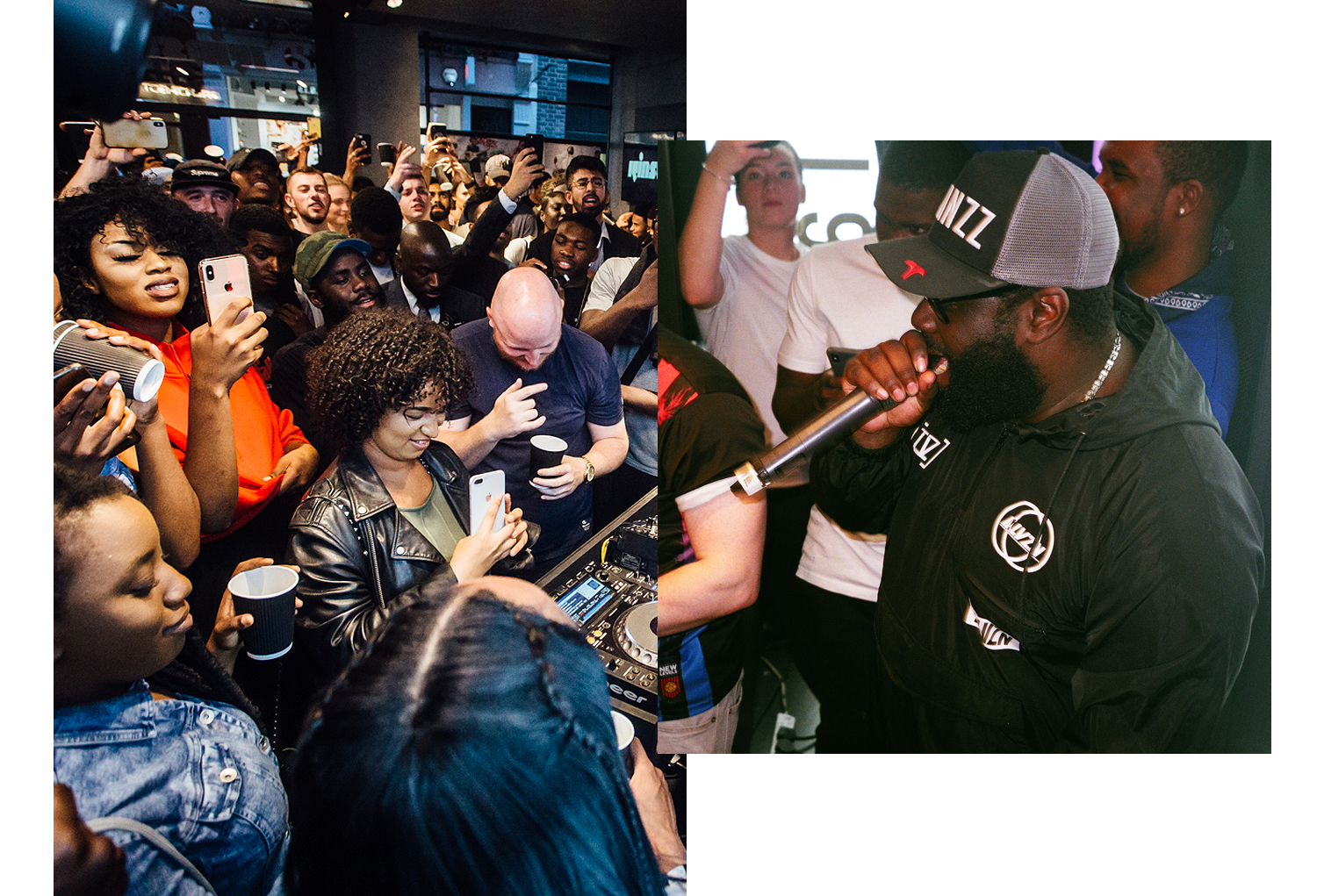 So tonight has all been about ‘Find Your Flow’, the process of getting yourself in a mindset to be the best you can be. At what point in your life did you feel like you found your own lane as an artist?

It was from young, actually. I was maybe 15 and we used to have a mini festival every year in Lewisham called People’s Day, and I used to go on stage and perform to 500 or 600 people – from there I realised I had something that could go on to be big. I recognised talent within myself and people seemed to connect with me, so I spent lots of time creating flows, putting lyrics together, and thinking more deeply about where I could take things.

So following ‘Money Over Everyone III’, you’ve put out 17 major projects, which is a huge back catalogue. How do you feel your style and work has developed over that time?

It just seems to get better and better. As the years have gone on I think a lot more about my lyrics and who they’re going to relate. I try to make my music connect with all ages, genders, races, everything – if I look back to some of my early stuff, I just feel like I’ve got a far greater command now of how I use my voice, I’ve mastered my own art.

And what are the points of inspiration for you to keep coming back and delivering new takes within your lyrics?

Life! It’s literally life and the people around me. As we all grow, we find ourselves in different environments and hanging out with different people. I’ve been to so many places all over the world now – Japan, China, Australia – and that’s been a pretty big thing for me, obviously when I was first writing bars I hadn’t been to those places so my outlook was different. I think inspiration hits me everyday, right down to every action I take and the situations I find myself in.

And whose flow are you rating from the crop of MCs riding high right now?

I like Novelist – even though he’s young, it feels like he’s always been here because his sound and lyrics are so authentic…it’s like he’s been there from the start. I’ve been listening to him a lot recently. 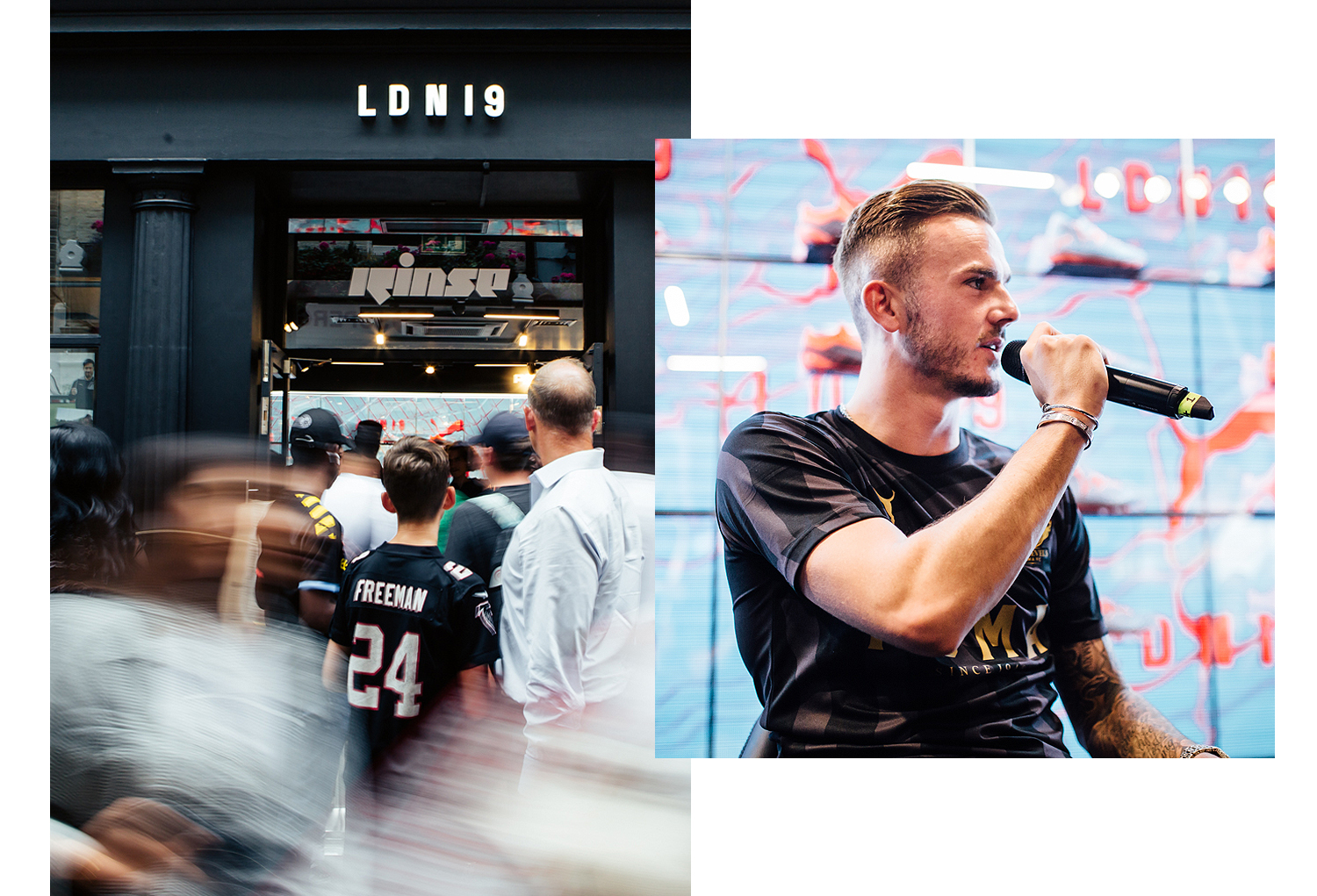 You’re stepping out in the PUMA RS-X Tech tonight. How are you rating them and what do you usually look for in a pair of sneakers?

It’s got to be colourful. I used to typically go for dark shoes but now I like to stand out a bit! I don’t like bulky trainers, I like my trainers streamlined and quite slick. I think PUMA’s gone with that approach more and more, which I like.

How would you describe your style more generally? What sort of look do you like on the street, compared with what you might go for on stage?

I just wake up and I wear what I vibe with on that day. I’m probably different to most other artists in that way who probably plan out all their bits and get lots of styling – I just trust myself and see what feels right. The only thing I make sure of is that I’ve always got my hat, I need my snapback.

In any line of work you have to feel good, 100%. Whether you’re a footballer, a rapper, or a writer…you have to feel good! People can tell if things aren’t looking right. It’s like in boxing with Anthony Joshua’s loss, everyone was saying he didn’t look right – the fans can really see that in someone when they’re about to perform. You always need to feel your best self and looking good is part of that. 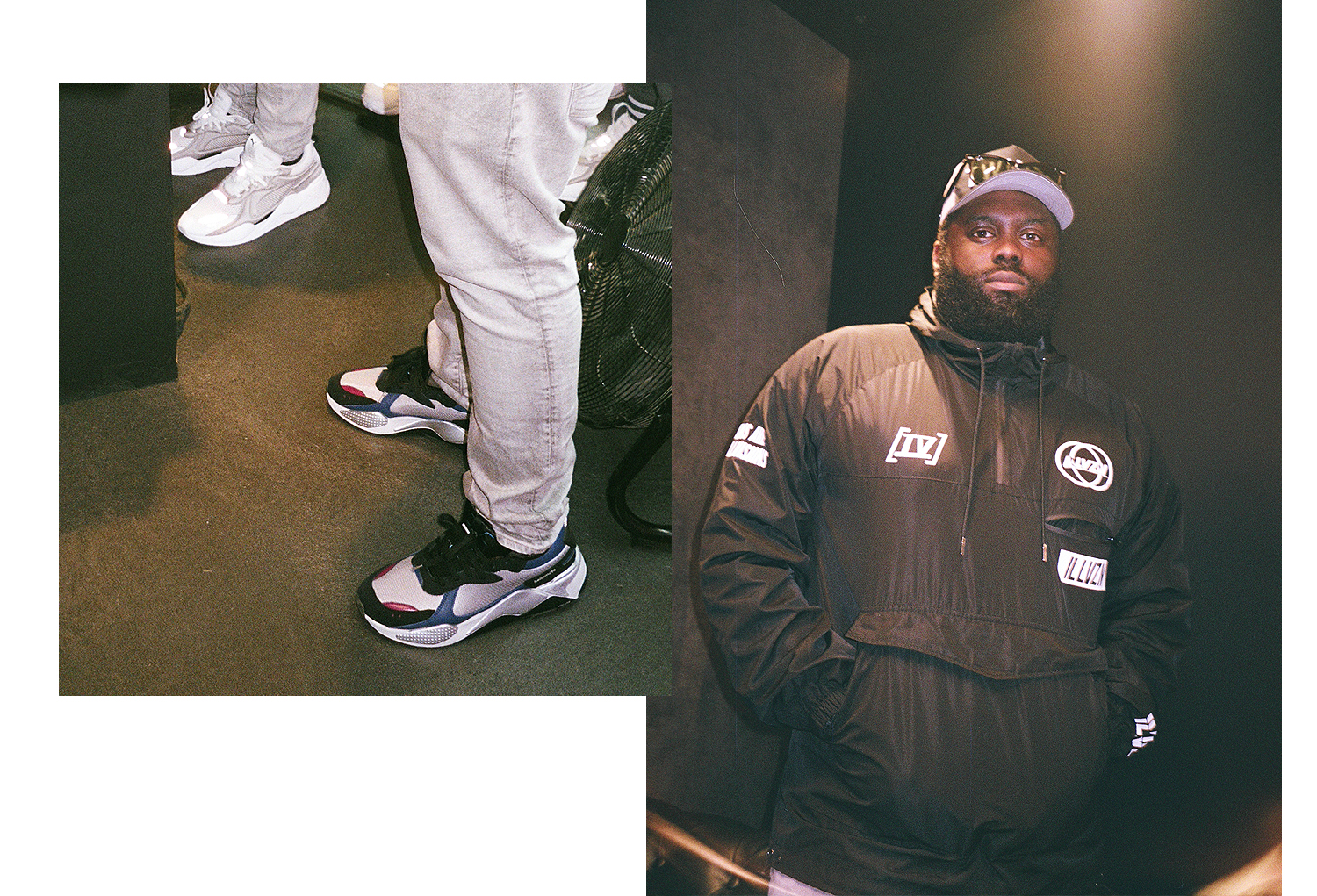 The AJ thing, that was obviously such a huge setback for him in his career. He’ll be on the comeback trail right now and I’m sure there are times when you’ve had setbacks and you’ve had to work hard to find your flow again. How have you dealt with low points?

I think you’ve always got to appreciate everything you still have, that’s the foundation of a comeback. You need to appreciate that you’re still here, you’re still strong, and you have a chance to right some wrongs…I think when you dwell on a loss or failure, you’re not solving the problem. As soon as you focus on solving what went wrong, you start to get results – and then you can look back on whatever went wrong and laugh!

What are the qualities you think creatives need to have to succeed? Whether they’re an aspiring artist, a filmmaker, a photographer, whatever it is…

I think determination is paramount. You also need an open mind and to understand that anything is possible at any given time. If you’re the sort of person that gets pessimistic a bit too easily, this isn’t the world for you. I think transparency and purity is important too, as long as you are true to yourself it’s all good. The second you’re not being real, that’s when the problems start and people start to question your motives – always be real, no matter what it is you’re doing.