Yes, we all know it’s proper shit that there’s going to be no big football tournament this summer. Just as Spring was starting to get going and Big Jacket weather looked to be behind us, Covid-19 came along and locked off everything.

While dealing with negating a global pandemic is obviously the priority for everyone at the moment, keeping your mental health in check during this period of existential uncertainty is also vital. So, here at VERSUS, we thought: what better way of distracting us from social distancing and the total void of sport than thinking about… the future of football!

In true, glass-half-full optimism amidst our current situation, there now genuinely seems like an opportunity for several of the country’s brightest talents to boost their chances at getting a call up next summer. 2020 has by all accounts been chaotic so far, but the 19/20 season has showcased that there are now a host of Young Lions looking threateningly like they could labelled as a new “Golden Generation” in 2021 with another year’s worth of experience under their belts. With EURO 2020 now officially off the cards, we can all look forward to it coming home at EURO 2021, right?

No pressure or anything – not that England fans ever get swept up in that sort of thing – but as you might have guessed by now, we’re ever the optimists when it comes to backing the nation’s sauciest young ballers. So, here’s a pick of some of the young English players we reckon have a real shot of making Gareth Southgate’s next England squad for an international tournament… whenever that may be. 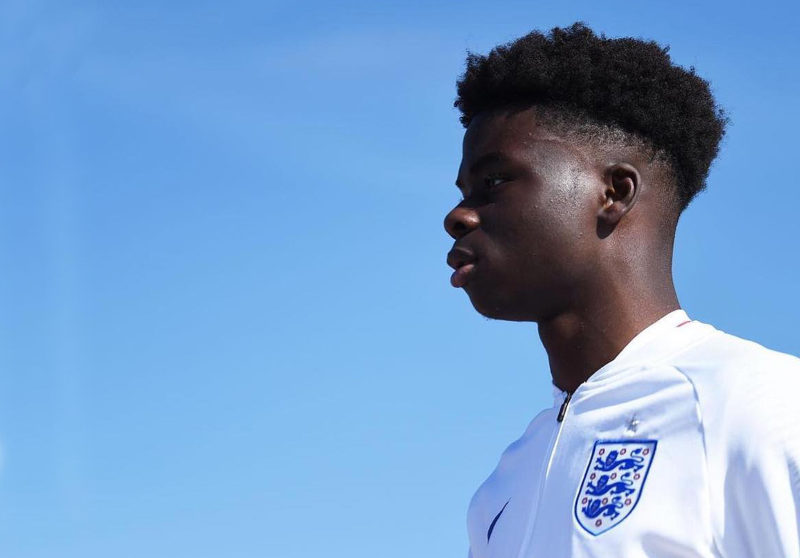 As we said last month before all the Corona chaos kicked off, Arsenal’s latest starboy looks ready to make an impact on the biggest stage. The Ealing-born teen was putting numbers on the board on a weekly basis, leading the way with more the most assists at Arsenal this season. He was also arguably the most in-form player in his position in the Premier League. Though naturally a winger by trade, Saka would provide unpredictability and freshness to the role, and add an attacking threat on the Three Lions’ left flank severely lacking in options at the moment. 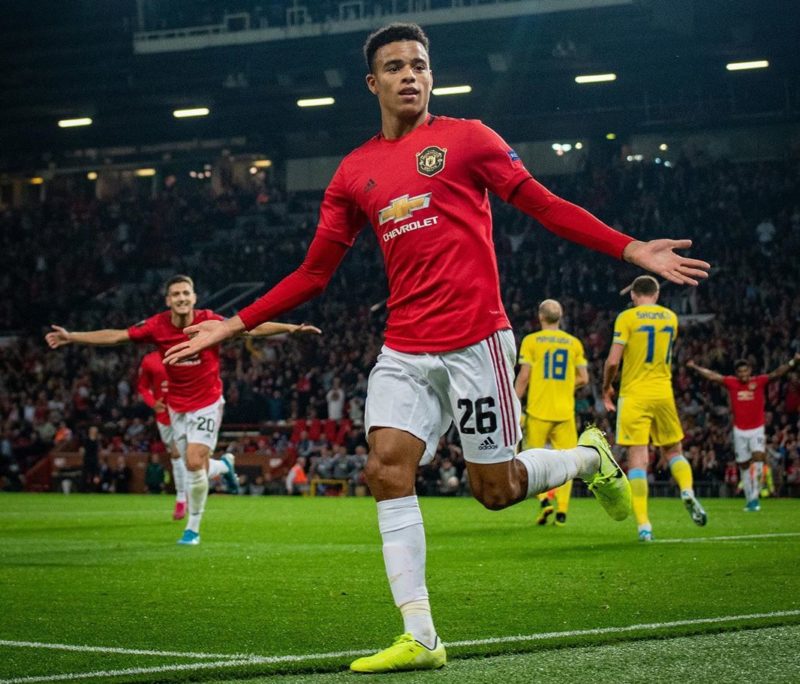 After finally being given the chance to step up from the club’s famed Carrington Academy this season, Mason Greenwood has now solidified his status as the next big thing at Old Trafford. Playing in that utterly ruthless mould of previous United gunmen like Ruud van Nistelrooy and Robin Van Persie, Greenwood is deadly with either foot he strikes the ball with, bagging 14 goals in his breakthrough campaign. Considering that Greenwood was just 17 when the season started, that’s nothing to be sniffed at – with the Young Lion demonstrating a step up to the senior side is now within reach. 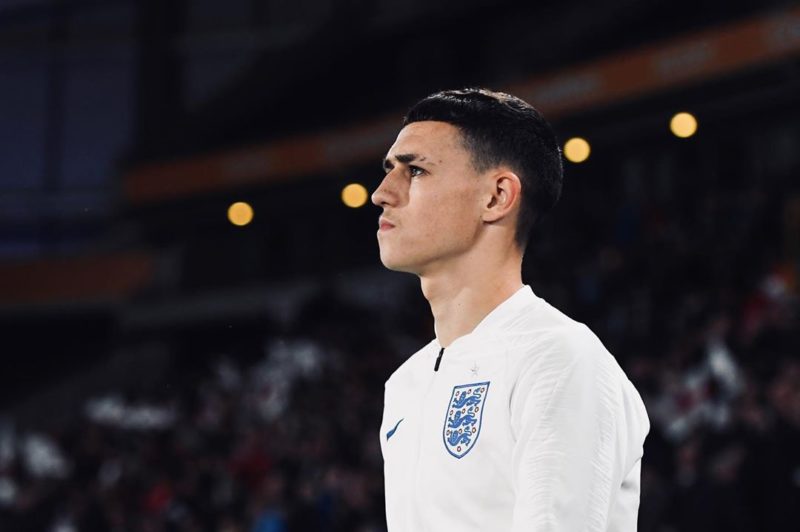 Phil Foden has continued to impress every time he’s been afforded minutes by Pep Guardiola this season. He’s created a big chance every 31 minutes in his Champions League appearances in 2019-20 – surpassing none other than Lionel Messi, who creates a clear cut opportunity every 69 minutes. In his last start for City, the Stockport Iniesta won Man of the Match in the League Cup final, showcasing that, when given a chance, he’s ready to step up. Southgate was widely reported to give him his senior call-up before the outbreak, and he’ll be looking to assert himself as the go-to-guy in the Number 10 position for the Three Lions once football resumes again. 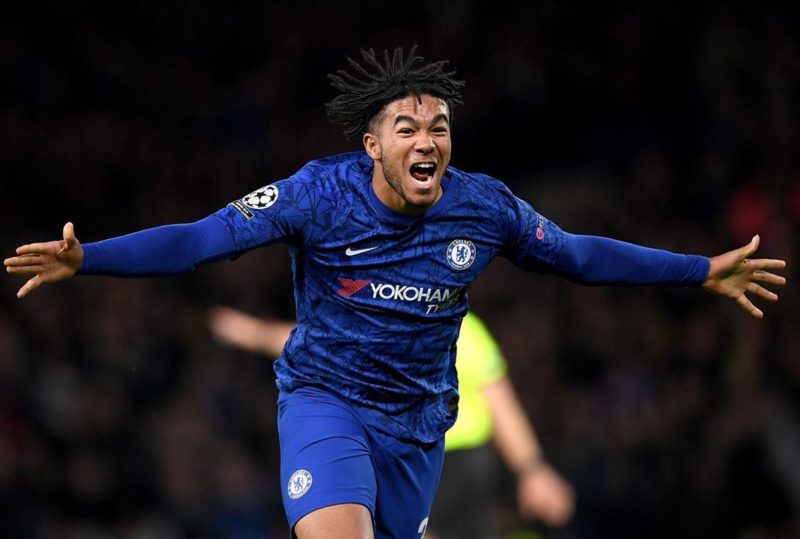 Plenty of people within the Chelsea set-up didn’t think Reece James would make such a step up this season, but he’s proven all the doubters wrong. Chelsea have had a whole class of ’19/20 coming through at Stamford Bridge in the current campaign, but Reece James is the name getting Blues fans’ the most excited. The full back has all the pace and positional awareness to dominate in defence, but also has a deadly whip on his right foot that has been him draw plenty of comparisons with Trent Alexander-Arnold – who James could be the perfect understudy for in EURO 2021. 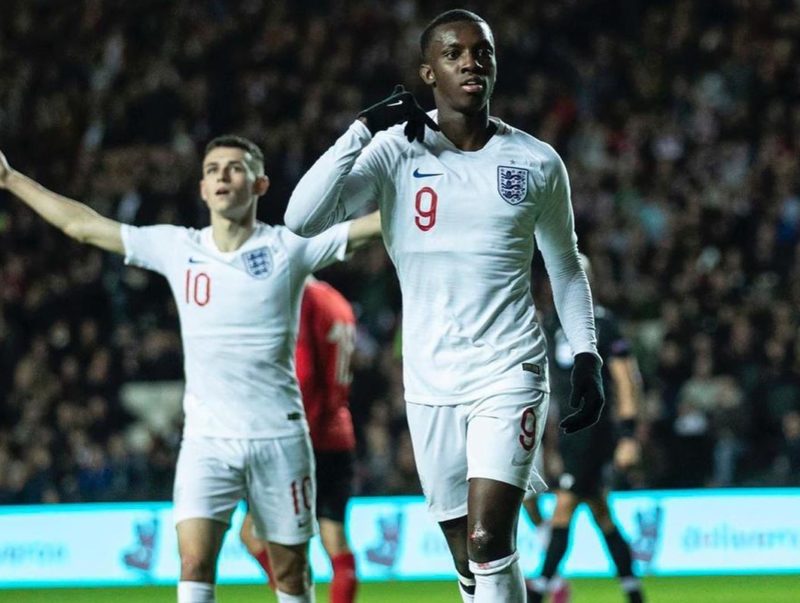 Eddie Nketiah is a bagsman. Despite only being handed a handful of starts for both loan club Leeds United and Arsenal this campaign, Nketiah has managed to bag 8 times in just over 1,000 minutes in a very stop start season. With Pierre Emerick Aubameyang’s future in doubt and Mikel Arteta backing many of his young players with plenty of first team action, another year of consistent phone celebrations could result in Eddie picking up a call from Gareth Southgate next year. 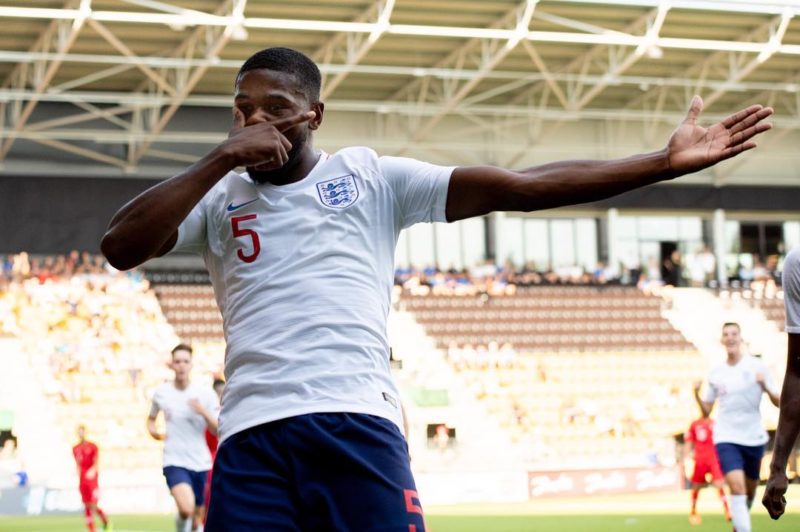 Japhet Tanganga has impressed everyone with his breakthrough into the Tottenham Hotspur first team this season under Jose Mourinho. Despite doubters of the Portuguese manager being quick to malign him for not giving youth enough of a chance, Tanganga is a player doing disservice to that argument, having become a vital cog in the Spurs defence in 19/20. Blessed with the strength, pace, concentration and adaptiveness to become a top, top defender, another year of development should see the Young Lion build on his his early promise at the back on his way to potentially becoming one of the best young English centre backs around. 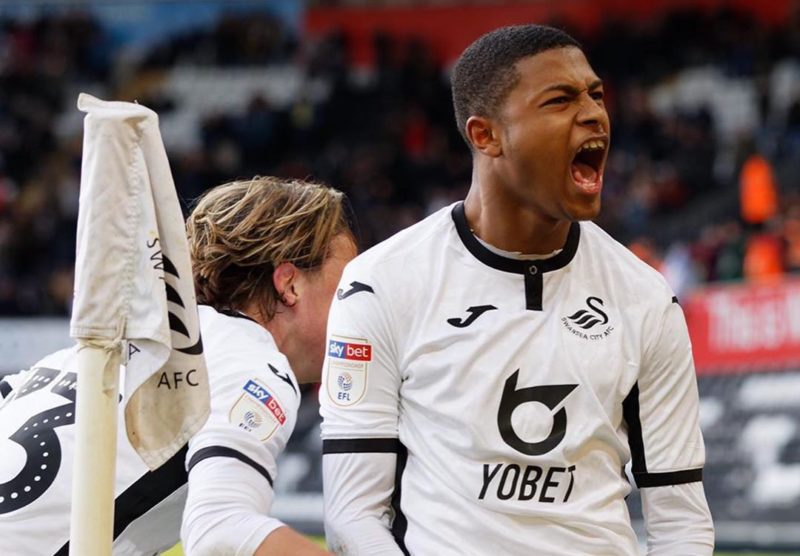 After enduring a disrupted year, Rhian Brewster has been showcasing exactly what he was born to do while on loan at Swansea. Having bagged four goals in 10 games for Swansea since January, Brewster looks like the player Young Lions fans saw win the Golden Boot at the U17 World Cup back in 2017 – a certified goal poacher blessed with great link up play, tenacity and hunger to get better. While he’s been a consistent scorer at England youth level and watched frequently by Gareth Southgate, more consistent game time in the lead up to 2021 could make him a surprise shout for next year’s tournament. 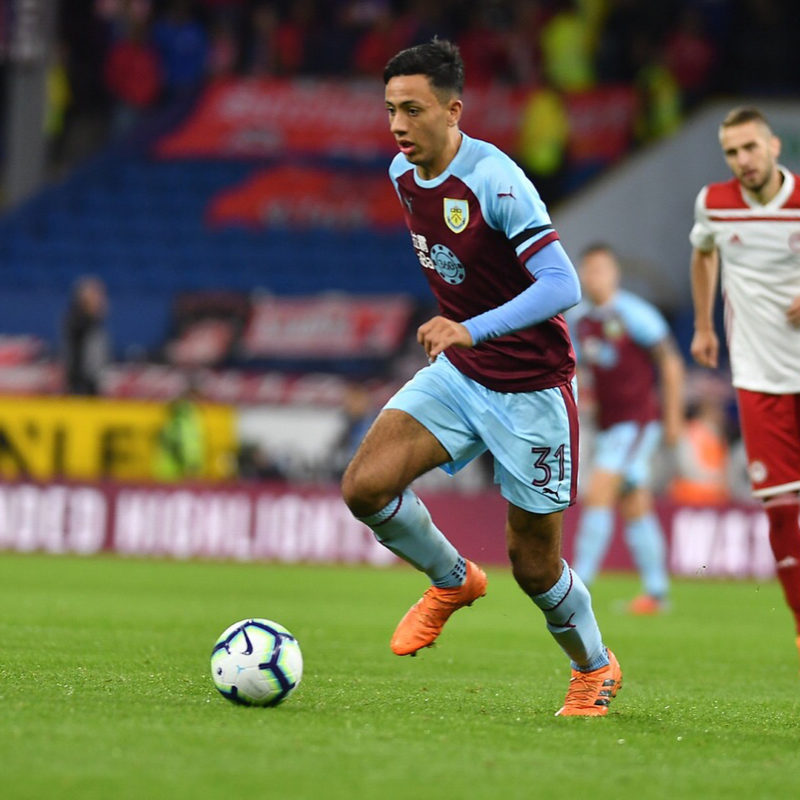 Dwight McNeil is one of – if not the only – creative output in a very rigid Burnley midfield under Sean Dyche, but he’s very effective given the constraints of his playing system. McNeil is brilliant with the ball at his feet, and is able to contribute vital assists and goals for a team not exactly renowned for scoring many, He’s also still highly underrated as a result – not that a host of elite clubs haven’t been taking notice of the 20-year-old winger, who is one of the most consistent young players in the division. Burnley have offered him a platform to show what he can do on a regular basis, and should he get a move to a bigger club, the left winger could provide drive, dynamism and width for the Three Lions next summer. 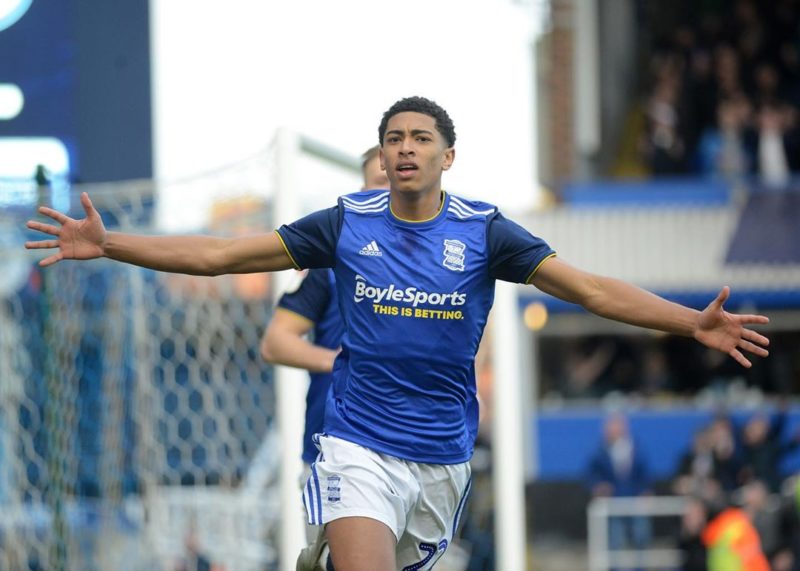 Jude Bellingham is one of the world’s most wanted. Wanted by United and Bayern but opting for Dortmund will see The Blues’ youngest-ever first team player follow in the footsteps of Jadon Sancho in a deal worth £30 million. Bellingham may be on just £145-a-week and studying Sociology A-Level, but Bellingham is a baller blessed with an imposing on-pitch that has seen him boss many hardened Championship midfielders this season. Should he continue his ascendancy, you’ll be watching him hand out lessons to opposition midfielders for many years to come. With that price tag breaking Dortmund’s record transfer deal for a player, it’s clear that BVB believe he can go on to replicate Sancho’s success at the Signal Iduna park for many seasons to come. 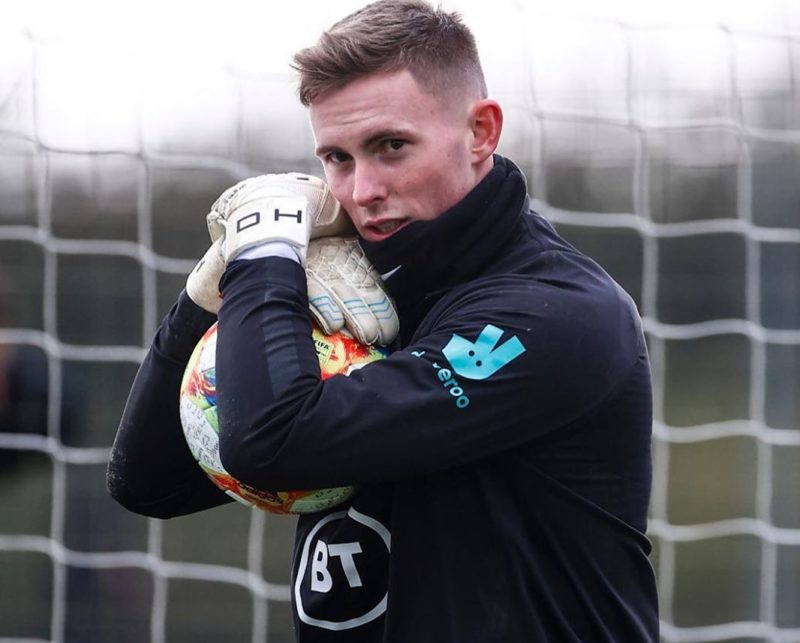 Without doubt the form English ‘keeper in the Barclays, Dean Henderson looks set to become a household name in years to come after enjoying a stellar debut season on loan at Sheffield United. Henderson has gone from strength to strength since his howler against Liverpool, regularly pulling off worldy saves for fun at Bramall Lane to put them in contention for European football next season. With David De Gea struggling for form, Hendo has been widely tipped to take over from the Spaniard at Old Trafford next season. Jordan Pickford will be another man worried by that prospect, as there’s a big, big chance 2021 could be the year Dean Henderson becomes England’s Number 1.