The world has changed a lot since 2007. Those were the early days of camera phones and compilation videos, with young players up and down the country captivated by Joga Bonito-era Nike adverts. Everyone was inspired to play the game with expression and shut down their local streets with CR7-level tek.

One young player doing just that on the streets of Sunderland was Jordan Henderson. Utilising his video editing ability, he superimposed a picture of him and his mates on a Nike Air Max logo, soundtracked it to “Papa Loves Mambo” – made iconic by the Brazil World Cup squad in 2002 – and then uploaded a keepy-up compilation video to YouTube to showcase his skills to the world.

Fast-forward to 2021, and we’re linking up with Nike poster boy, NHS Charities Together champion and Premier League, Champions League and World Club Cup-winning captain Jordan Henderson to shoot a new campaign…over FaceTime. But despite how dramatically the world has changed, and how dramatically a once bit-part player labelled a flop has risen to the very top of the world game, Hendo has never once forgotten his beginnings, his roots, or that video he recorded as a teenager: ”Aye, I think we’ll have to record a 2021 version of that some time. Do a little comparison between then and now.”

The sheer resilience Henderson has shown to get to this level is testament to the dedication to his dreams he had when he was recording that heavily-pixilated video so many years ago. Now forced to shoot this editorial over iPhone while we’re in the midst of a global pandemic, Henderson embraces the change and difference of this all-new dynamic. Not only the model pro, it’s also clear he’s a bit of a pro model given the amount of shoots he must’ve been on in the past – needing no instruction to showcase his personality in the shots we capture over FaceTime while he showcases Liverpool’s brand new jersey from the Air Max Club Collection.

Linking up with Hendo over FaceTime, we found some clean pieces from the Nike store to pair up with Liverpool’s 2020/21 Air Max-inspired jersey to create a street-ready Kit Fit. 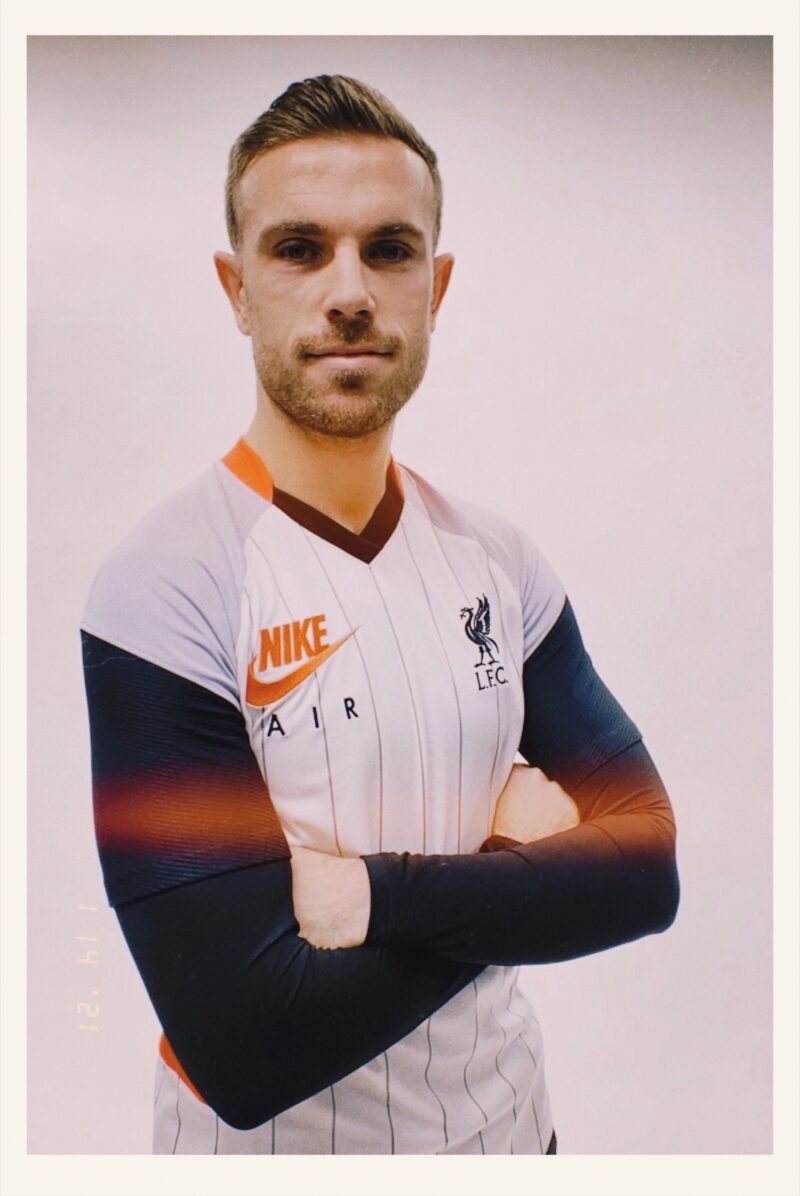 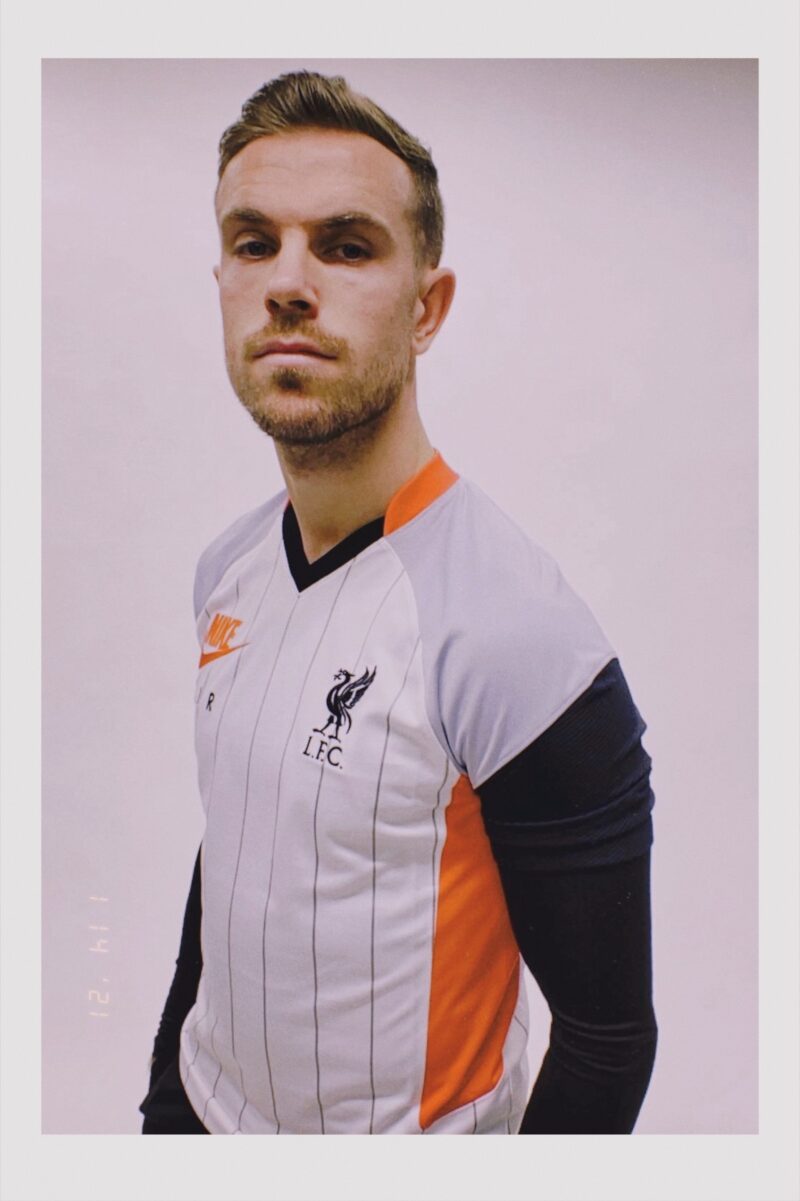 The Reds’ special-edition jersey is inspired by the OG Air Max 90 “Infrared” colourway and features a throwback (and oversized) Nike Air logo that replaces the traditional Swoosh, paired up alongside classic pinstripe lines. It’s clear when we speak to him that Hendo has a real affinity with Air Max – just like the city of Liverpool itself. Having worn this exact Air Max 90 growing up, having a whole kit designed on the model, for the club he plays for, feels like a “full circle moment”.

Still a big lover of the AM90 as well as Air Force 1s, Hendo’s a man that rates his classics. Despite Liverpool having a special relationship with 110s (Air Max 95s), Hendo’s much happier pairing up the AM90 while on set between outfit changes. Speaking of outfit changes, when we speak about his recent cameos on Trent Alexander-Arnold and Andy Robertson’s ‘Wingmen’ Instagram series, he says he’d much rather rely on Trent than Robbo if he had to be styled by one over the other. “Trent’s definitely a lot more with it, style-wise,” he says, before setting up one of his trademark laughs, “Robbo wouldn’t have clue.” 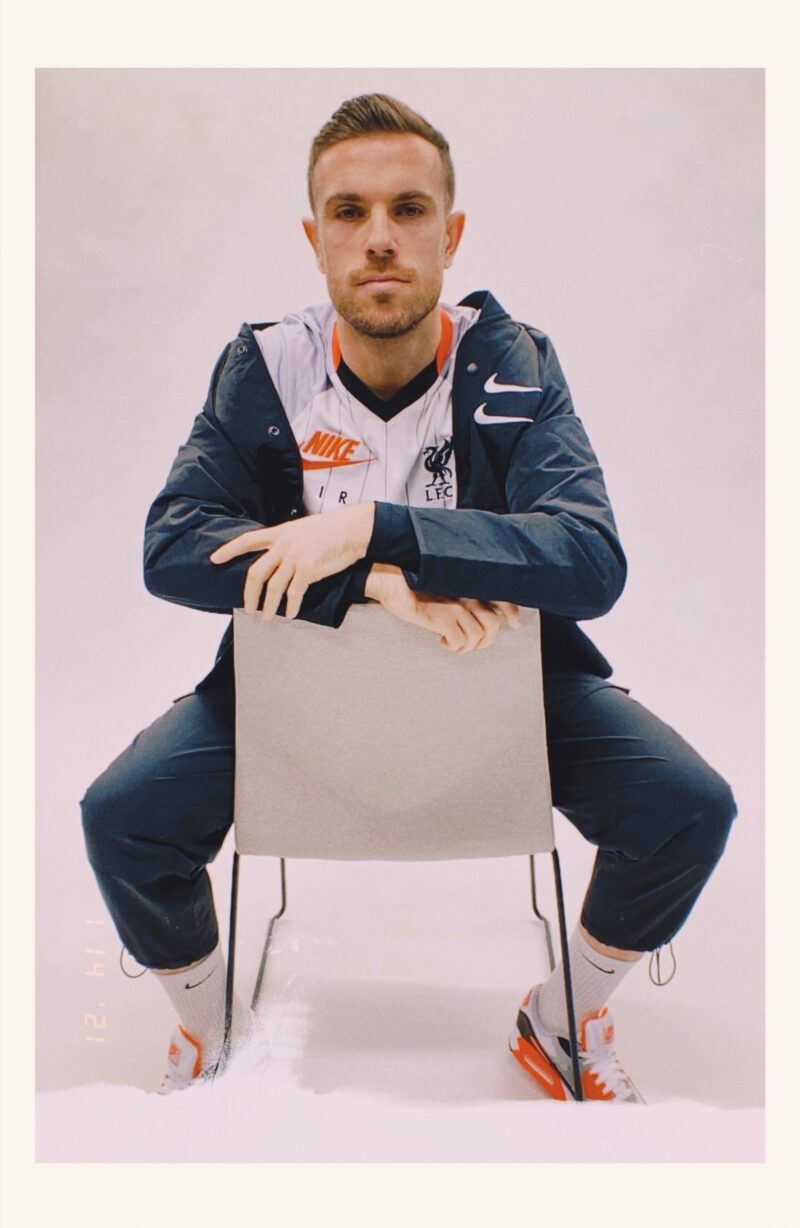 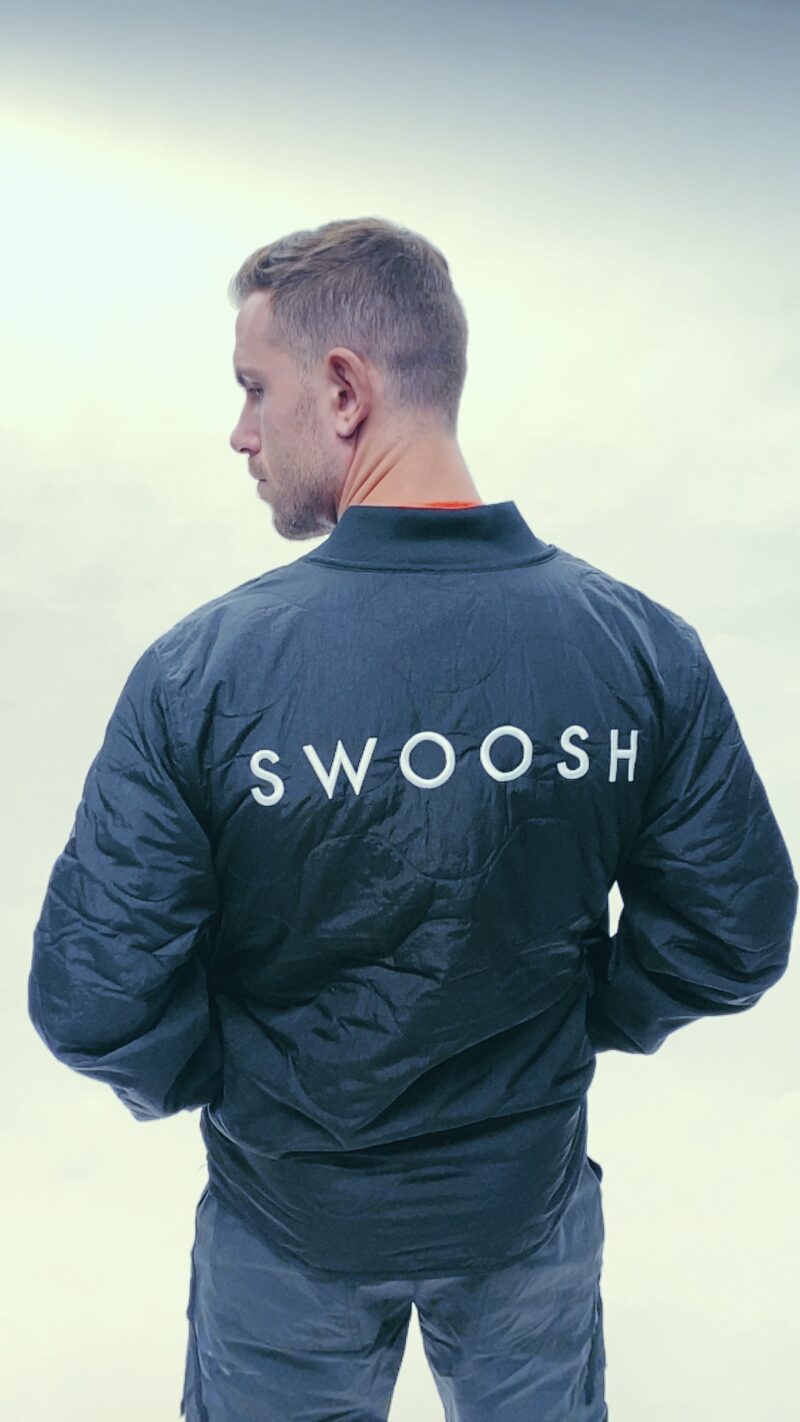 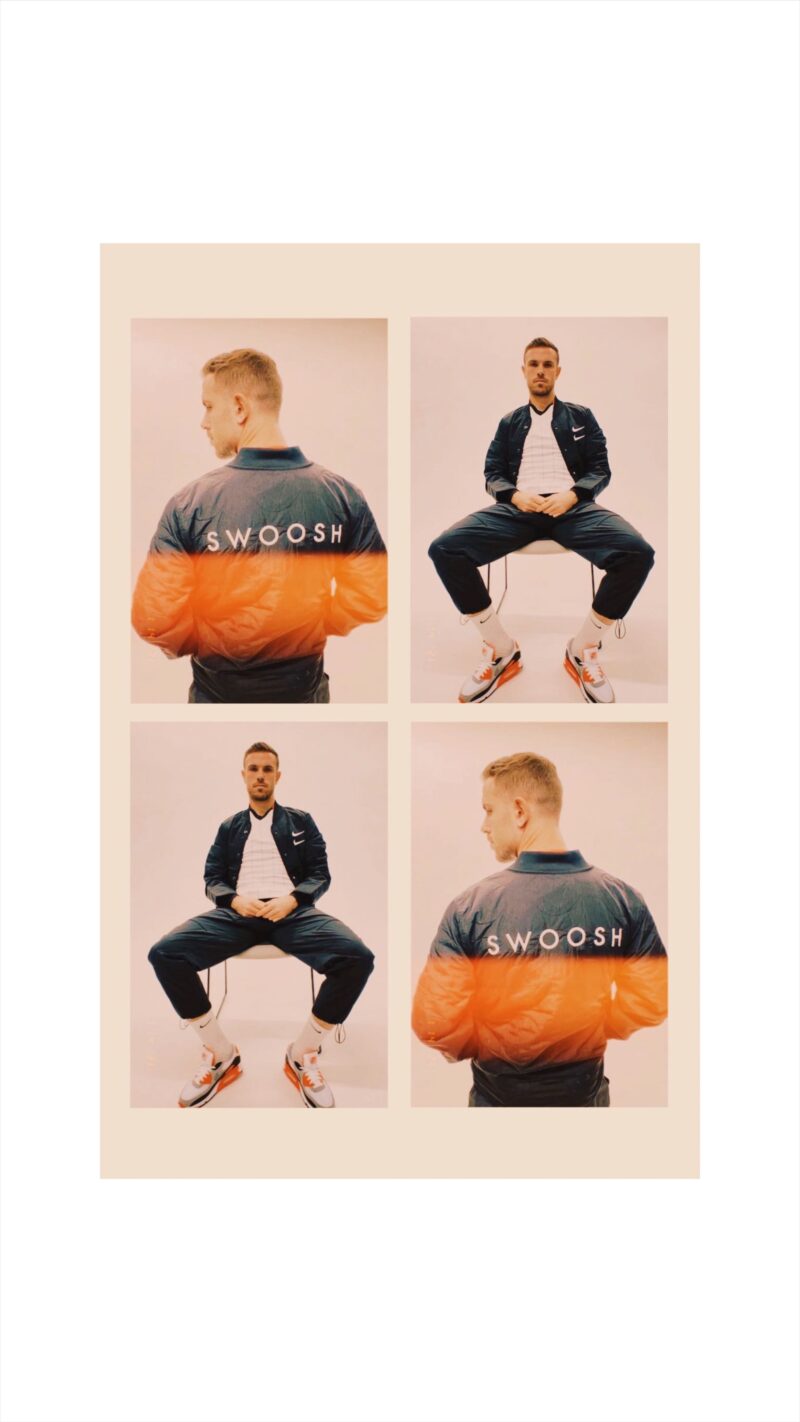 Liverpool’s special edition jersey is also complemented with a full lifestyle range designed through the same vibrant “Infrared” lens that sits on the silhouette, which shares a strong visual connection to the city itself. The accompanying grey LFC tracksuit is a keeper – “yeah, I’m wearing this on the regular” – while Nike’s Swoosh Quilted Bomber, also goes down well on set alongside iconic Tech Pack woven pants and corresponding ‘LFC’ Air Max 95s and an LFC-branded Air Max tee.

Despite the last nine and a half years at Liverpool having seen Henderson gone from boy to man, at the age of 30, Hendo is a man that knows what he likes. Despite thinking Divock Origi and Naby Keita are a “bit more out there” when it comes to their fits, he rates them: “These guys just do their own thing with their style, you can see it’s their own personality when it comes to their clothes – it works for them.” If he had to pick one teammate’s wardrobe as the best, it’s a fellow Nike boy he’s opting for: “Virgil Van Dijk every time. He’s a man that just keeps it classy with everything he does. He keeps it simple, but it works every time.” 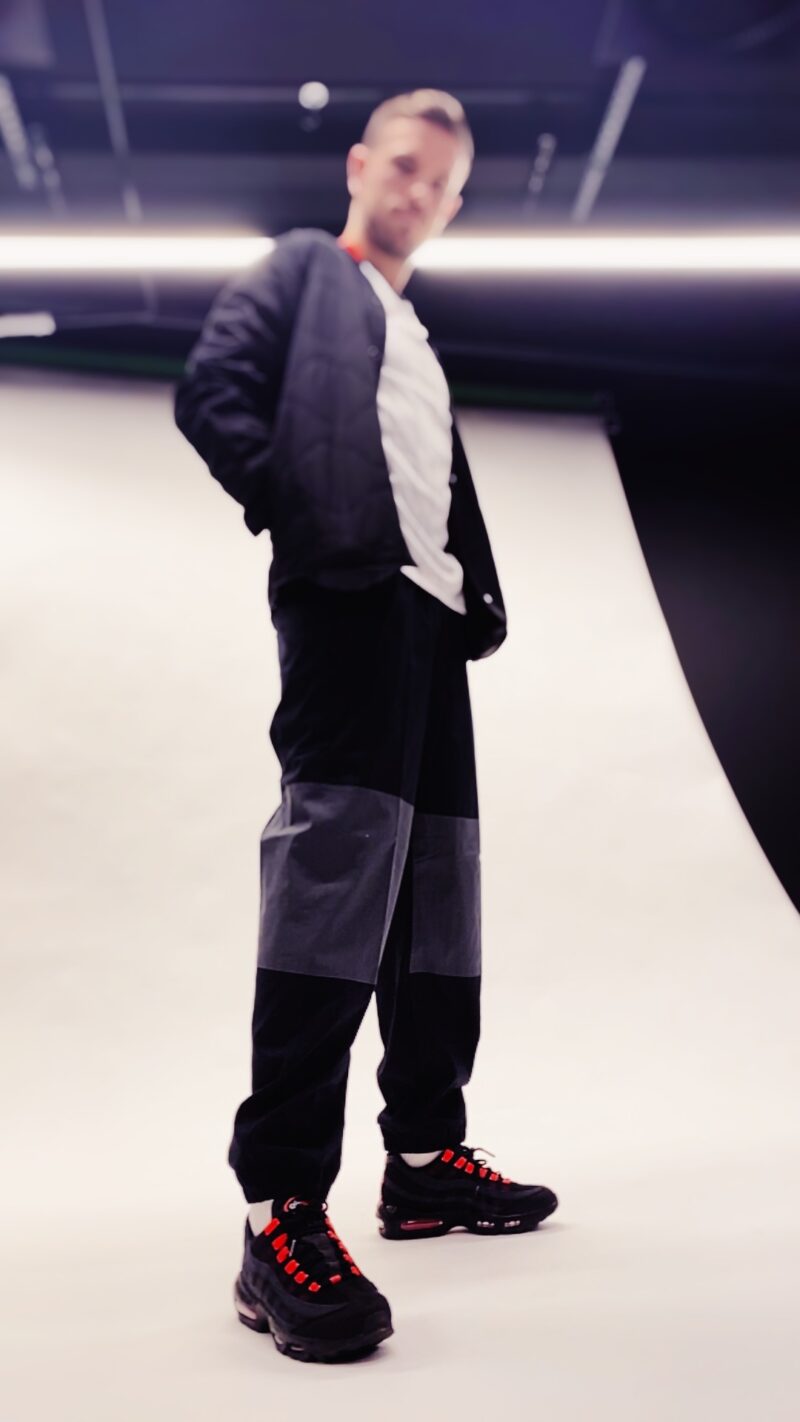