If you’d have told me two years ago, at the end of the season I could be playing Champions League football, I wouldn’t have believed you. Injury can do that to a player. It can make them doubt their ability and the journey they’re on. At nineteen, my career could have been over before it had even really started. I never thought I’d experience that level of physical and emotional pain at such a young age. But I’ve been a fighter since day one, and above all else, I’ve never stopped believing in myself.

I’ve always known how important it is to be resilient. I started playing football at eight-years-old and knew back then: if you get knocked down, you get back up again. You might not be able to get up straight away, but you will eventually and that’s the most important thing to remember. But patience and perseverance aren’t always skills young people have in abundance. I certainly didn’t before rupturing both my MCL and ACL in 2019. But your ability to come back stronger in football is vital because not everyone ‘makes it’.

It’s easy to question yourself after experiencing something that has the power to end your dreams, but I’ve always been determined to succeed. Now if you were to tell me next season I might be playing Champions League football, I’d tell you: there’s no ‘might’ about it. It’s going to happen. 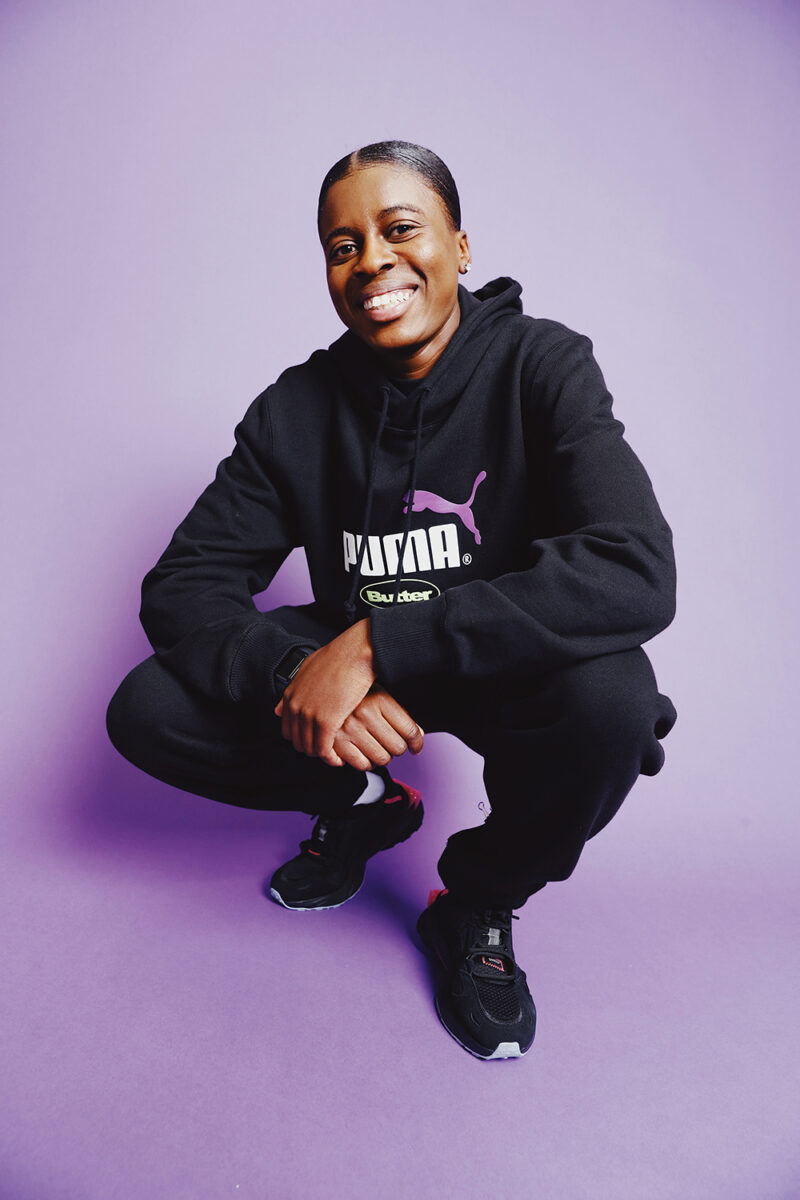 I’ve always been competitive, it’s just in my nature. Growing up with brothers I wanted to do what they did. More than that, I wanted to make sure I was better than them! That winning attitude is something I took to my P.E. lessons in school. Every sport we played, whether it was rounders or basketball, I worked to make sure I was the best. I tried my hand at everything, but it was football that really peaked my interest. And looking back on it, it’s hardly surprising considering my Dad is football mad.

Despite being an Arsenal fan, Manchester United games were always on in our house thanks to Dad. When he was younger he played as a centre-midfielder – he still likes to think he was faster than me – and as soon as he could, introduced football to my older brother but he just didn’t take to it. My younger brother, on the other hand, was born to play football. And thankfully he was, because watching him play at the weekend was where my love for the game started.

One weekend, Dad asked my brother’s coaches if I could join in and at first they said no because I was a girl. It didn’t put me off at all! Me and Dad would train on the sidelines during their sessions and matches until one day they finally asked if I wanted to play. They could see how quickly I was developing, and within weeks I was moved up two age groups causing havoc in front of goal.

Even at eight-years-old I was adamant I was going to play football. I’ve always been fairly independent and I think that’s one of the reasons why I love the game so much. All you need is a ball and a willingness to practise. The players I idolised growing up epitomised that mentality. I’d watch clips of Neymar for hours on end, trying to replicate his skills and movements. I loved a step-over – I still do! – and watching fast, quick-footed players inspired me the most as a forward. Learning to be a team-player is something I learned a little later when I joined Spurs.

“The days of watching my brother and training on the sidelines were well and truly over. It felt like I’d found where I belonged.” 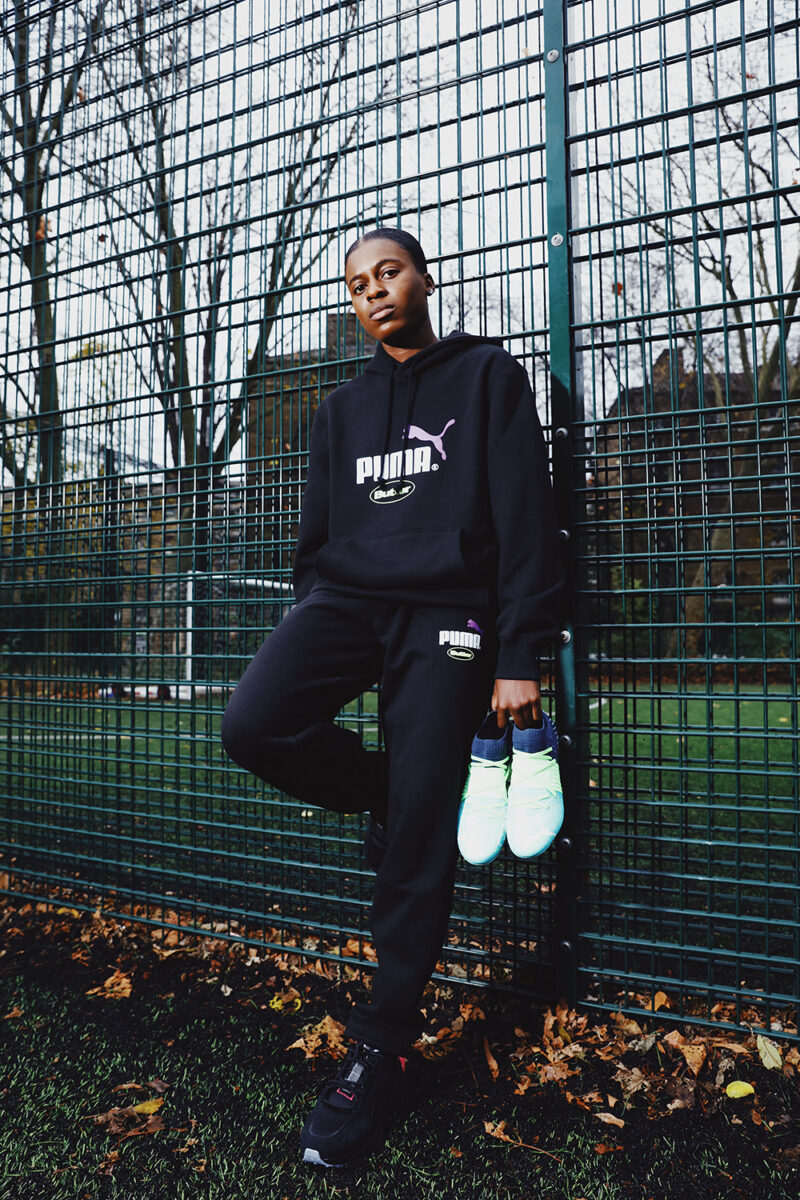 It was by total chance I came across Tottenham Hotspur. Some things are just meant to be I guess!

We were on our way to my brother’s match when my Dad spotted dozens of girls playing football. We’d never seen so many girls on a pitch before! He pulled up, walked over and asked if I could join in. Within ten minutes I was out the car, in my boots and scoring goals. At the end of the tournament, my Dad ran over to me and said: “they want to sign you!” I thought, great! But, ‘who’ wanted to sign me? When I found out it was Spurs, I was beyond excited. Being born and raised in Enfield, they were everywhere. It didn’t matter that I was an Arsenal fan, all I could think about was the fact I’d get to play football with girls my own age. The days of watching my brother and training on the sidelines were well and truly over. It felt like I’d found where I belonged.

At the time, Spurs were still a grassroots team but when we played other sides in our league we’d annihilate them, sometimes 10-0! I remember thinking, ‘wow. We’re the top dogs!’ But it wasn’t until I joined Arsenal I realised it wasn’t the case.

My most vivid memory of trialling for Arsenal was slipping while doing a Cryuff turn. I thought I’d messed up big time when that happened. The club was offering three scholarships and there were over 100 girls at the trial. My competitive nature was really put to the test. When I was told I was one of the three selected, I couldn’t believe it. My childhood club wanted me to play for them. Unbelievable. It was then I realised maybe I could play professionally like one of my heroes Neymar. But I wasn’t prepared for how challenging it’d be.

The days of beating teams 10-0 were over when I played with Arsenal. The quality of play went through the roof, and I had to adapt quickly or risk losing my spot on the team. There comes a time in everyone’s journey when they realise: I have a choice to make that will impact the rest of my life, and stepping up in order to play for Arsenal was one of those choices. I never lost my determination, and desire to be the best. I lived and breathed football. And my family, teammates and coaches knew it. That mentality helped me to play with World Cup winners, Olympic Champions and English legends like Jordan Nobbs.

Although it was a major achievement to play for ‘my’ club, I needed more game time if I wanted to be the best, so I made the decision to leave Arsenal – not an easy decision for anyone to make. But that headstrong eight-year-old girl always seemed to ‘pop up’ when I needed her most, and not long after taking that step, I returned to Spurs and signed my first professional contract. A feeling – still to this day – that’s indescribable. A move that wouldn’t have been possible without my Spurs’ coaches Karen Hills and Juan Amoros. Two people who saw my drive and potential to reach the top of my game. They took a young dreamer from Enfield and helped to turn her into a fully fledged professional athlete.

“Karen and Juan were willing to do anything to help anyone who needed it. It was that exact type of support I craved when my life came crashing down due to injury.” 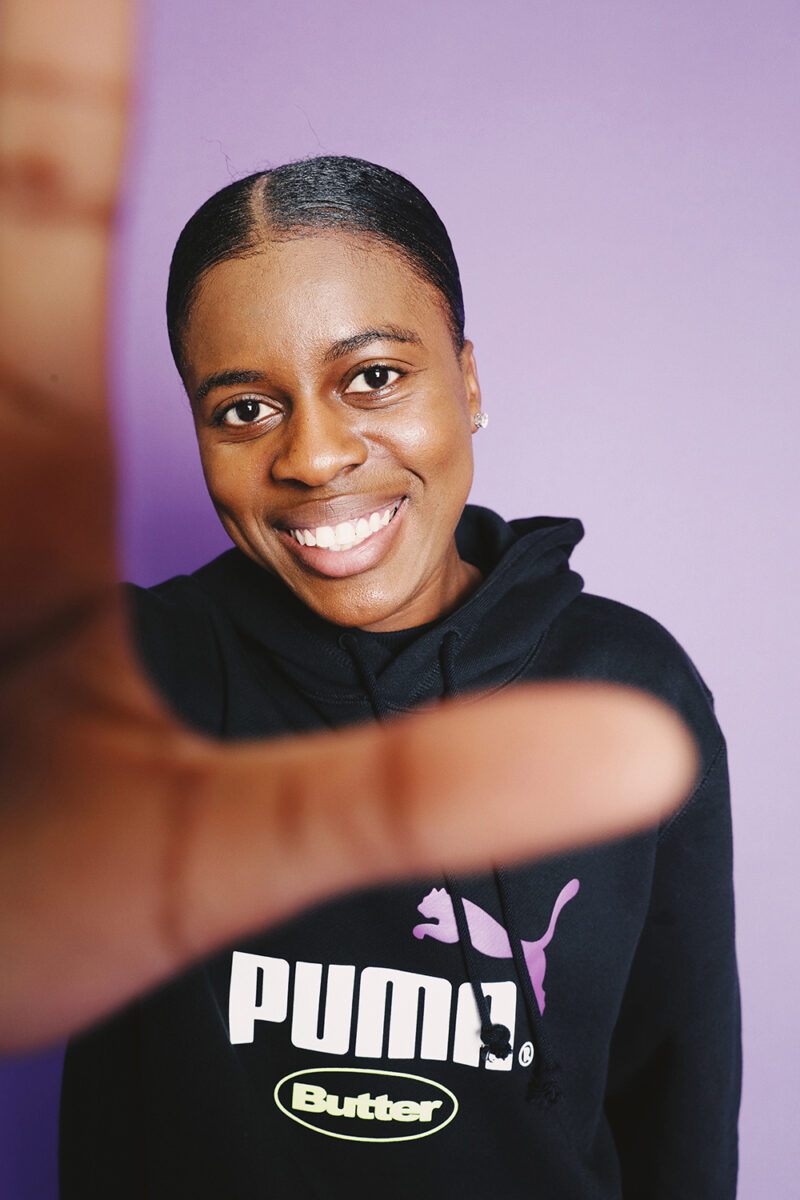 My return to Spurs under those two coaches changed my career completely. In the short space of time I’d been away from the club, things had changed massively. Professional contracts, access to shared facilities with the men’s team, the signing of international players. And that was all down to Karen and Juan. Above all else, they understood that players were people and were willing to do anything to help anyone who needed it. It was that exact type of support I craved when my life came crashing down due to injury.

That summer was a bit of a blur. We’d just won promotion to the WSL, I’d scored the goal that sealed the deal for us and I was on such a high at the end of the season because of it. I’ve watched that goal back against Aston Villa so many times, it never gets old. Not long after that game I was away with England for the U19s Euros, and as soon as that tournament ended, I was back at Spurs for pre-season. The grind was unreal, but it’s what I’d always wanted so I just cracked on. In hindsight, I think I would have prioritised my rest and recovery a little more. Gaining that 1% can make all the difference to your performance, and at the time, I was almost running on empty.

We were based in Spain for our pre-season and were having to play games at 10pm because of the heat. I’d never experienced anything like it, but we’d won our first game 2-1 and were determined to win the tournament regardless of the extreme conditions. During our second game, it all went wrong. I warmed up and came on at half-time, and I remember pressing the centre-back who then played a pass I knew I could intercept. As I ran for the ball, the full-back slipped and I jumped over them to avoid being tackled. I knew as soon as I landed that something had happened because I couldn’t get up afterwards. For a solid 24 hours we didn’t know what the problem was. I could walk – and it was painful – but I didn’t have any swelling. The next few days were something from a nightmare. When the physio called and said: “I think you should come down to talk about your results, and we think you should bring your Dad with you”, I knew then something terrible had happened.

“Football has the power to change lives and make players better people, it’s certainly done that for me.”

I didn’t really know what my MCL or ACL were. Those words just seemed like sounds to me. The whole conversation was just noise. The only thing I remember was being told I’d be out for a year and that I’d need surgery. A year! We’d just been promoted to the top-flight of women’s football in England. I scored the goal that got us there! What was I supposed to do now?

People read stories about players who were almost the ‘next big thing’. I didn’t want to have my career cut short because of a freak accident. I kept replaying the scenario in my head again and again. Telling myself, ‘maybe if you’d done this differently it wouldn’t have happened’. I felt distant, and removed from a game and team that had given me so much. But I channeled that eight-year-old girl once again, and with the support of my coaches, family and teammates I got through it.

People ask me, how did you overcome such a huge obstacle at such a young age? And I tell them: I’ve never fallen out of love with football. It’s such a huge part of my identity. The life lessons the game has given me, have helped to shape the person I am today. And that’s something I’m quick to tell players coming up the ranks now.

Never lose your love of the game. Always remember that feeling you felt when you first kicked a ball. Or when you realised your teammates are an extension of your family. Football has the power to change lives and make players better people, it’s certainly done that for me.