adidas and Pharrell’s Humanrace imprint have linked up to present a host of artistically-reimagined kits for Manchester United, Arsenal, Juventus, Real Madrid and Bayern Munich – and they’re absolutely next level.

Using iconic designs from each clubs’ past and reinterpreting them in a hand-drawn, watercolour paint-like approach, the aesthetic and redesign of each kit was co-ordinated by Pharrell himself as a “celebration of the human spirit.”

Starting out with simple cotton t-shirts, the reverse engineered design process was centred around a raw, human and expressive hand-drawn technique on a simple piece of canvas while combining it with hand-drawn club crests across the range.

Every sponsor, club crest and corresponding partner logo is unified with this unique hand-drawn style – which serve up some of the most distinctive looking shirts ever imagined. 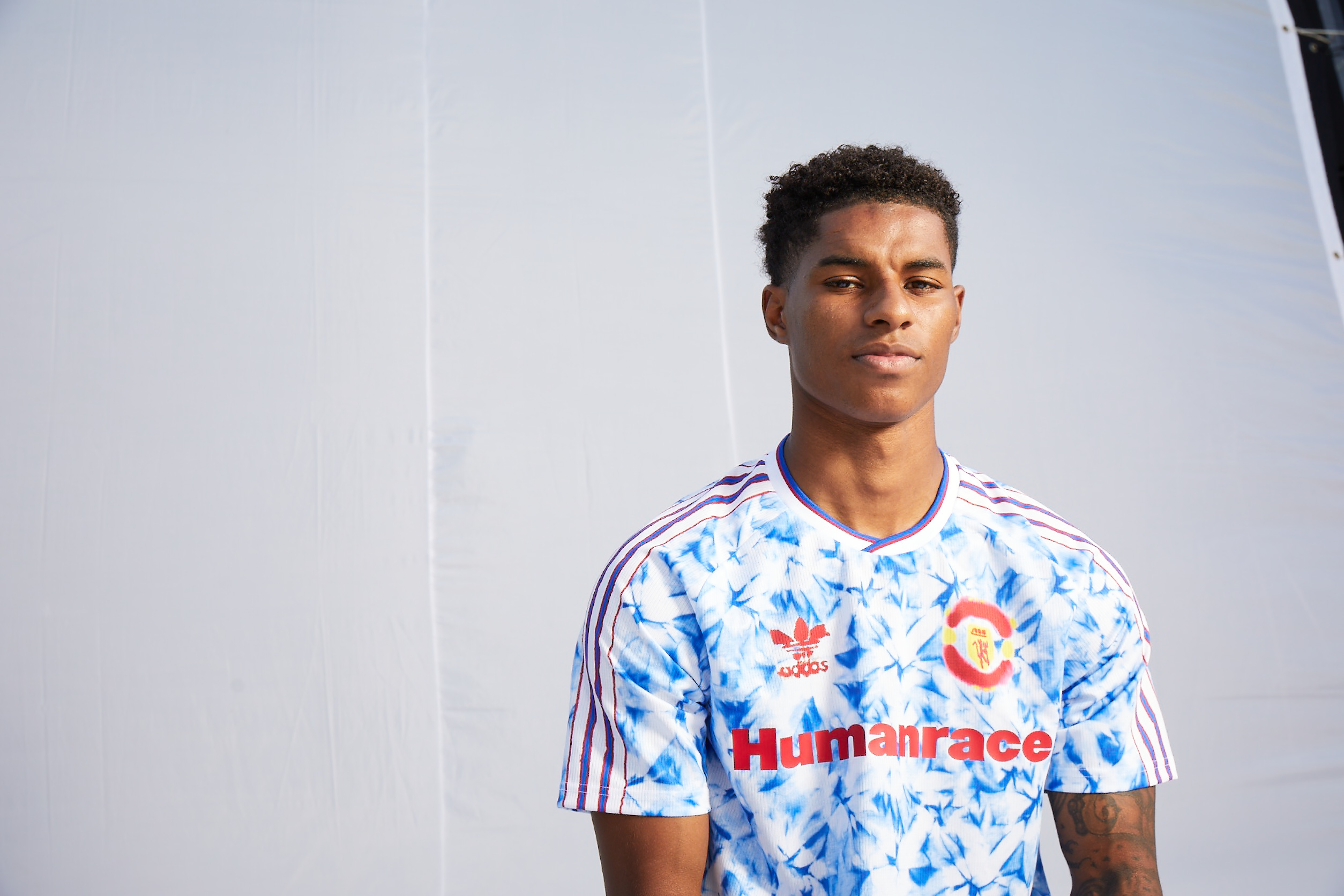 Pharrell’s remixed Manchester United jersey started from the club’s iconic snowflake blue and white print – first seen on the much-sought-after 1990-92 away kit. It was a design born out of the city’s famous Hacienda house scene from the late 80s, with the team of today utilising a tie dye affect to create a modern-day version of the legendary graphic. 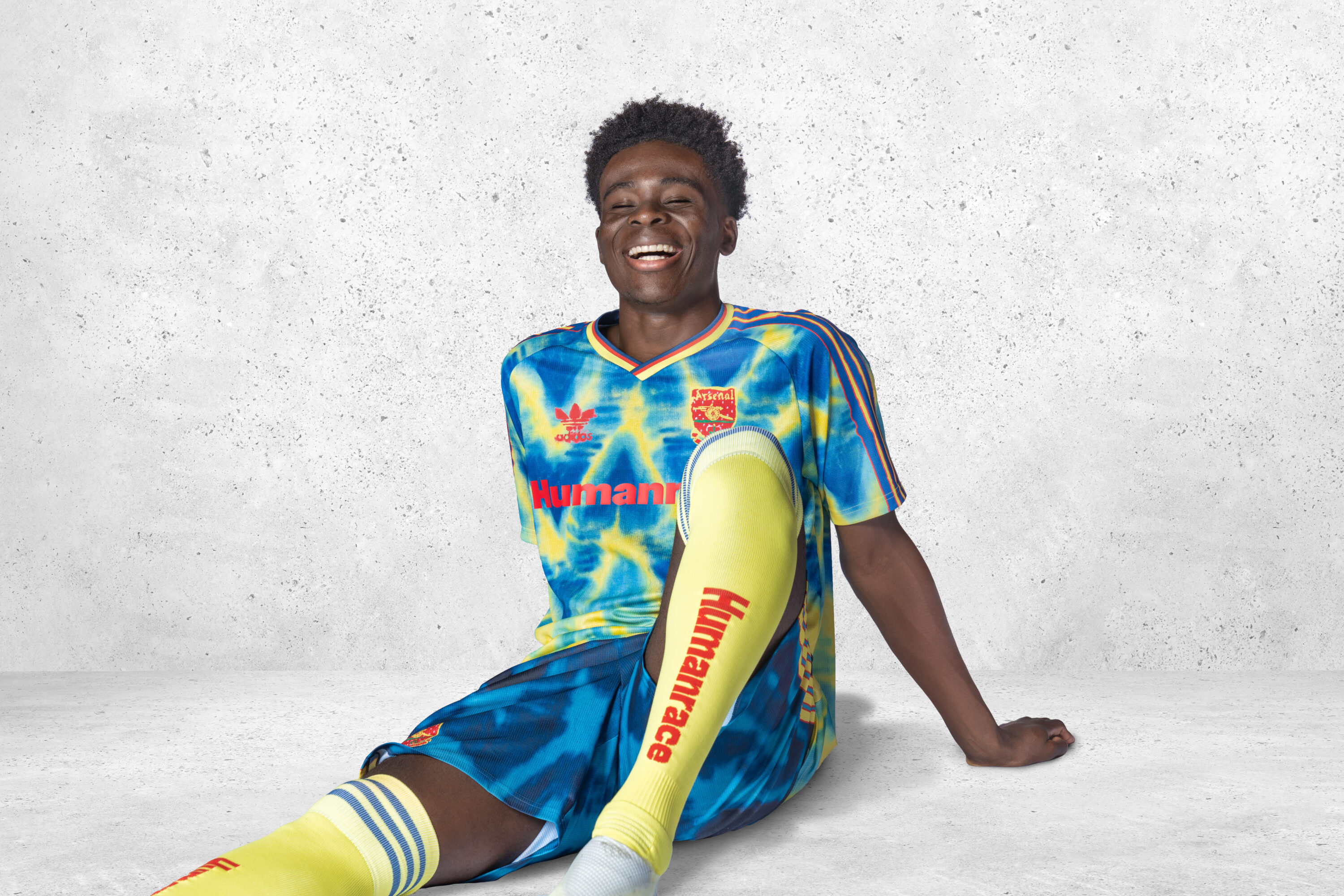 Pharrell drew from arguably the most recognised kit from Arsenal’s history, with the ‘Bruised Banana’ jersey from 1991-93 used as the influence for the HRFC jersey. The design uses a hand painted, paint-bleed effect featuring a wavey zigzag graphic – making it arguably the most striking shirt from the new collection. 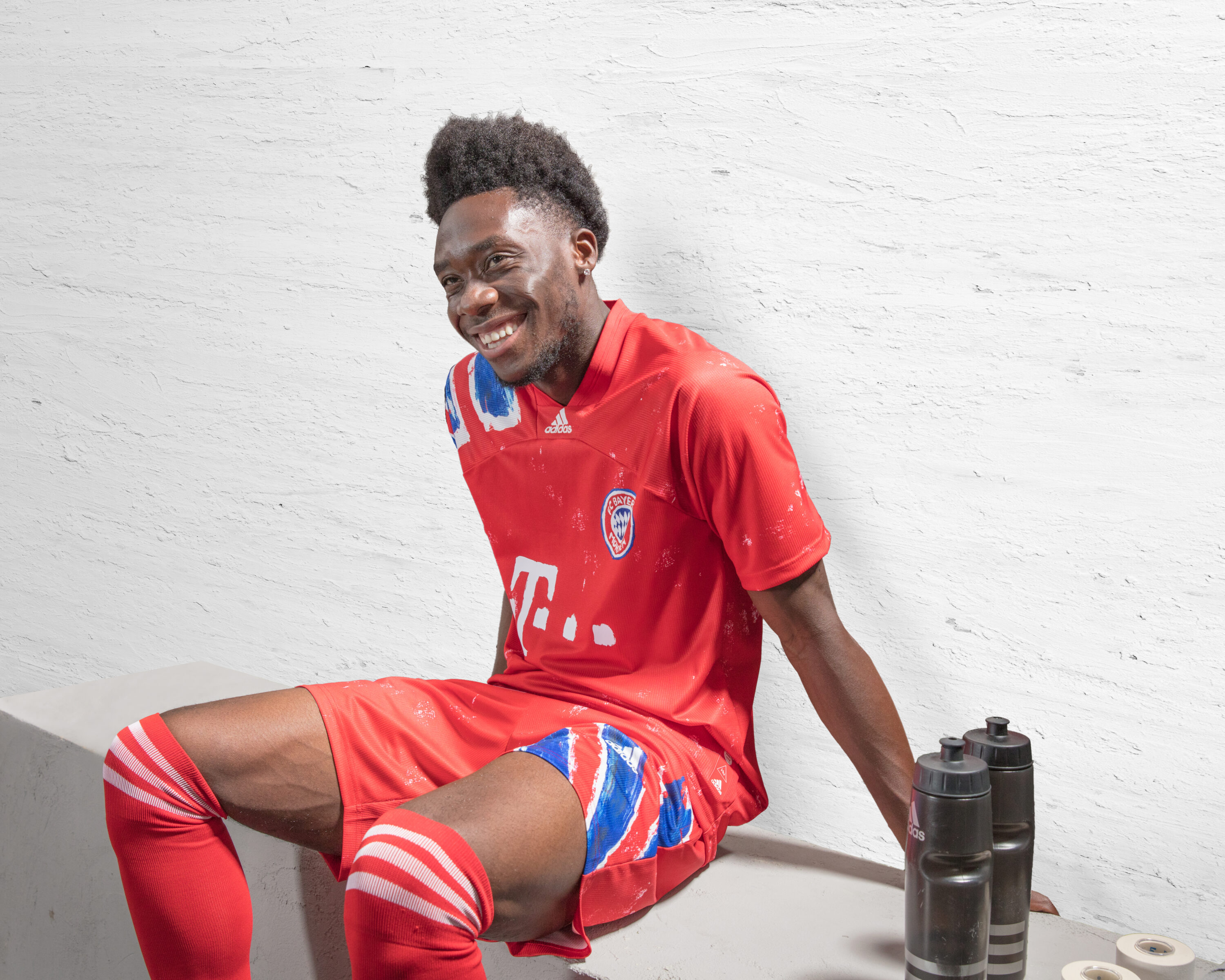 Next up, adi and Pharrell took inspiration from the red home shirt worn by FC Bayern Munich from 1991-93 season and reinvented it for a new generation of fans. The kit’s Three Stripe motif on the collar us redesigned using thick acrylic paint to give it a bespoke, human-made feel. 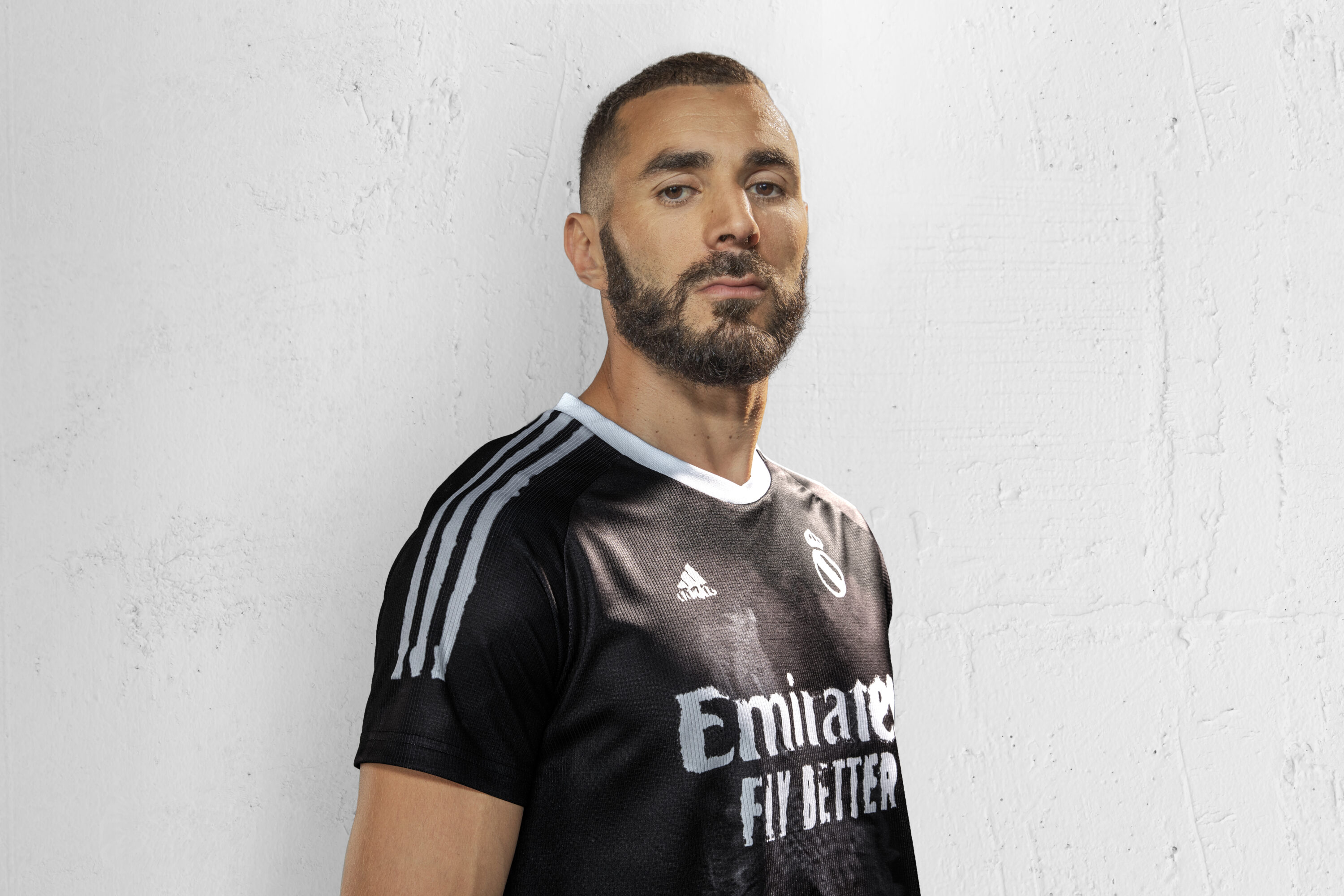 Real Madrid’s jersey is a new iteration of the Yohji Yamamoto-designed Real classic from the 2014-15 season. Yamamoto – a friend and collaborator of Pharrell – used a striking dragon design and a bird print against a monochromatic black. The Human Race FC team reimagined the shirt with hand drawn water technique to create an optic dragon on the shirt for Benz and friends to flex in this season. 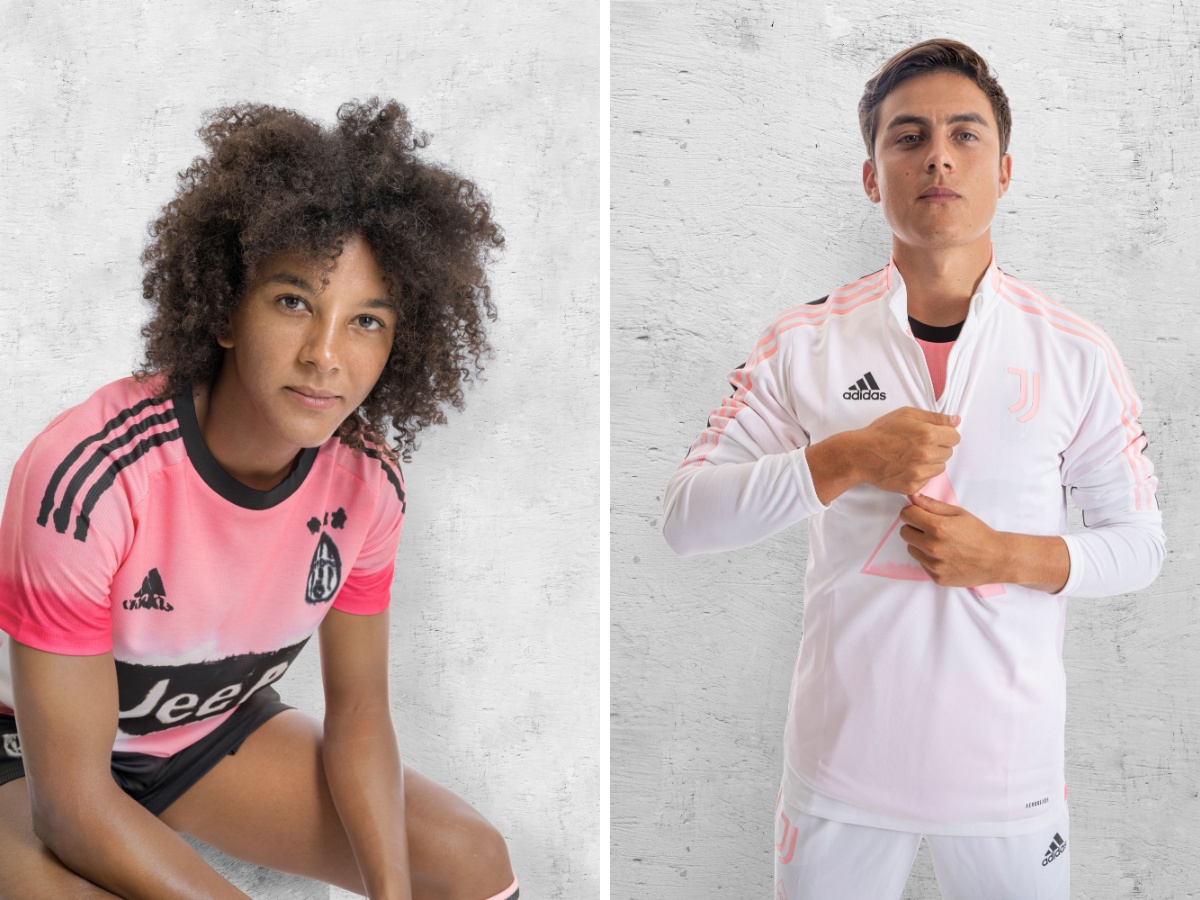 For Juventus’ jersey, the Human Race FC team selected a recent classic from Juve’s 2015-16 season – the first season of the adidas and Juventus partnership. The pink kit, made infamous by Drake and donned by Paul Pogba during his peak season in Serie A, uses bold and vivid colour with another handpainted approach that spills out on to the legendary ‘Jeep’ logo and crest. 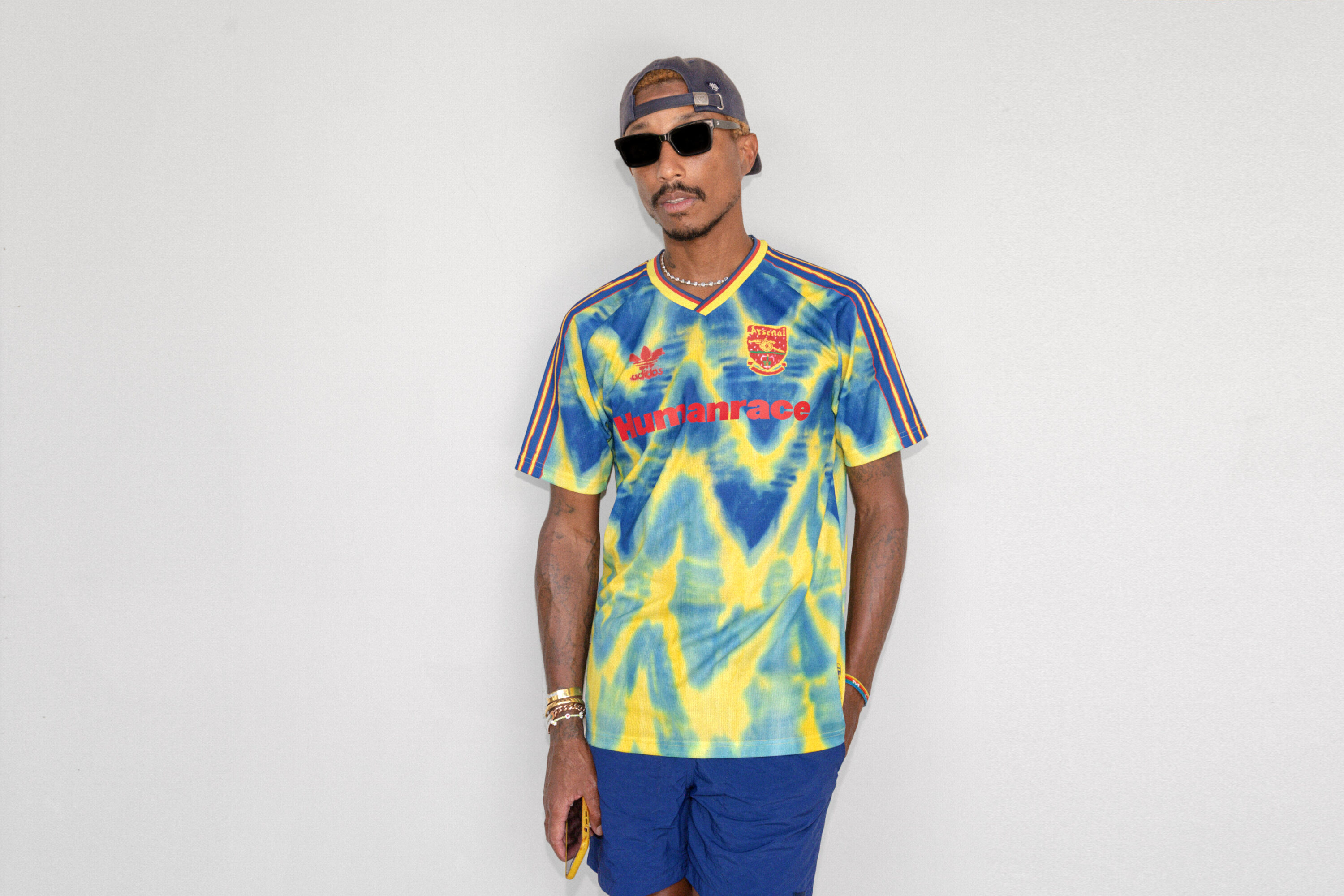 Speaking about the collection, Pharrell Williams said: “History is what shapes the future, and sometimes in order to look forwards, first we need to look back. The most important part of the process with this collection was to learn of each club’s legacies and how each defining moment of their histories were captured and preserved from a design perspective. Each of the new jerseys are symbols of the five club’s legacies and a true celebration of the universality of sport.”

You can cop the adidas Humanrace FC Collection – and reimagined Predator Mutator HU – now from the adidas website and select retailers.