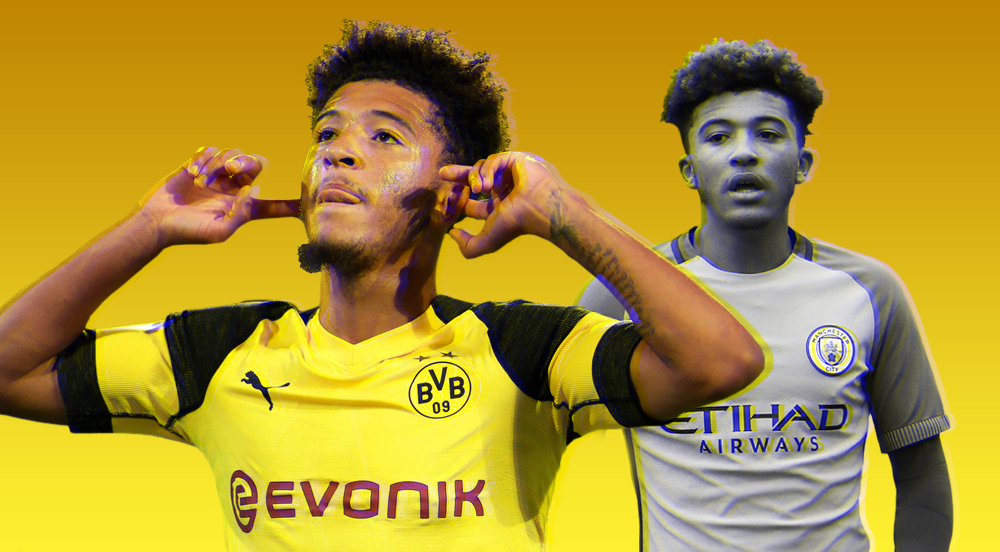 “You see Sancho scoring and assisting all the time now – and his role in that Dortmund team is hugely important, especially considering his age. That responsibility is essential for a player’s improvement.”

If there’s any footballer that can talk about moving to a foreign country in search of more first team opportunities, it’s Hector Bellerin. Playing in the youth ranks while his boyhood club coasted to La Liga victory with Dani Alves in his prime, Bellerin decided to leave for Arsenal in 2013 for more playing time. He quickly made his competitive debut for the club at 17 and has since gone on to become the club’s first-choice right back and one of the most renowned full backs in football at just 23 years of age.

Another 17-year-old who made a similar decision to pack his bags and make waves at an elite European club away from their homeland is Jadon Sancho. As everyone who follows football knows by now, Sancho is a serious problem. Having made headlines by leaving Manchester City last summer to take the vacated no.7 shirt previously worn by Ousmane Dembele at Dortmund, Sancho is fully flourishing with the responsibility bestowed on him in front of a fervent fanbase with high expectations.

The Jadon Sancho hype is real ?

Despite somehow being overlooked for the European Golden Boy award – which will inevitably be won by Kylian Mbappé – Sancho is already making a strong case for him to take home the prize next year after a ridiculous start to 18/19. Sancho has recorded one goal and five assists already this year, making him the top assist-maker in Europe’s top five leagues having only played a mere 124 minutes of football, meaning he’s clocking a goal or assist every 21 minutes.

As a result, he’s just been rewarded with a new contract with BVB that keeps him in Germany until 2022. As well as getting tipped to make his England Under 21s debut this month, the shouts for Gareth Southgate to hands him his full international debut before the end of the year are increasing in volume.

Sancho’s move last year is already seeming like a decision wise beyond his years, with the 18-year-old “so glad” to have opted for Dortmund, who were understandably quick to offer him new terms. Sancho is now setting the standout example to England’s next generation of gifted youngsters, and is one of the main reasons why so many of his talented peers are choosing to make the move abroad.

England’s successful youth teams are built on possession and fearlessness, and the standout English youngsters playing in Germany have all demonstrated that they can replicate their Young Lions form in the Bundesliga. Both Reiss Nelson and – last season – Ademola Lookman have already proved they can hang with Germany’s best.

REISS NELSON IS A PROBLEM ?

The Arsenal loanee just scored with his first shot and first game for Hoffenheim. Baller. pic.twitter.com/E0J5fCcjN5

Reiss Nelson is already showcasing his ability in both the Bundesliga and the Champions League at an attack-minded Hoffenheim team managed by one of the youngest and brightest managers in Europe, Julian Nagelsmann. Nelson looks as if he’s fitting seamlessly into their approach, having already notched his first goal off the bench for the club.

Having joined an exciting Red Bull Leipzig team on-loan last January renowned for its high press and counter-attacking football, Lookman had an exceptional end to the season, where he grabbed 5 goals and 3 assists in the Bundesliga while playing alongside the likes of Naby Keita and Timo Werner, who aided his individual game no end. Now back in the Premier League, he’s only played once for Everton this season.

“World class players need to have accumulated game time between the ages of 17-21.”

The experience of playing in elite games with elite players on a regular basis undoubtedly improves a player’s long-term potential. The likes of Lookman, Callum Hudson-Odoi and Ruben Loftus-Cheek will be watching highlights of Sancho tearing up the Bundesliga on a weekly basis – whilst they receive limited game time – with envy. Thanks to Sancho, young players at big clubs in England now know there’s an opportunity to become a top level player elsewhere.

Any elite player in the game today would have accumulated a high volume of minutes from the ages of 17-21, and young english players are beginning to understand that unless they get those minutes, the dream of becoming world class will never happen. This is why more and more English youngsters like Reece Oxford, Marcus McGuane, Jonathan Panzo, Reo Griffiths, Keanan Bennetts and Ronaldo Viera are getting comfortable with the idea of moving abroad.

If they start following Bellerin and Sancho’s footsteps, they definitely won’t be the last players to make the leap.