Welcome to VERSUS Jerseys – a content series that celebrates the legacy of some of the beautiful game’s most iconic kits. We’re taking football culture’s biggest names down memory lane and revisiting the teams, players and moments that made them fall in love with the sport. First up, we ask one of the biggest ballers in the Women’s Super League – Jill Roord – to select her waviest football fits of all-time.

There’s a quiet confidence that oozes from Jill Roord as she poses in front of the camera, wearing the shirt of her childhood idol Ronaldinho. A classic R10 jersey from his peak Barca years is an apt choice for an Arsenal goal-scoring machine like Roord, who’s already bagged two hat-tricks so far this season. That's even more impressive when you consider she’s been out with a knee injury for the last three fixtures – but scoring goals just comes naturally to her.

The midfielder, who’s played as a No.6, No.9 and No.10, despite still only being 23, made history when she scored the winning goal for her beloved Holland against New Zealand at last year’s Women’s World Cup. That winning kick started what seemed like the never-ending OranjeLeeuwinnen party last summer, and firmly put her name on the map of ballers to keep an eye on.

Champions League debut? Completed it at 16, mate. Highest goal scorer in the Dutch League? Ticked that off as well. European Champion? Easy, managed that at 20.

What do you expect from a player whose Dad played football with three-time Ballon D’or Winner Marco van Basten? Football is in Roord’s blood, and her blood runs Oranje.

We linked up with The Gunners’ latest star in her local park in St. Albans with photographer royalty Danika Magdelena to capture some classic kits that represent Roord’s journey up the ranks in the beautiful game. 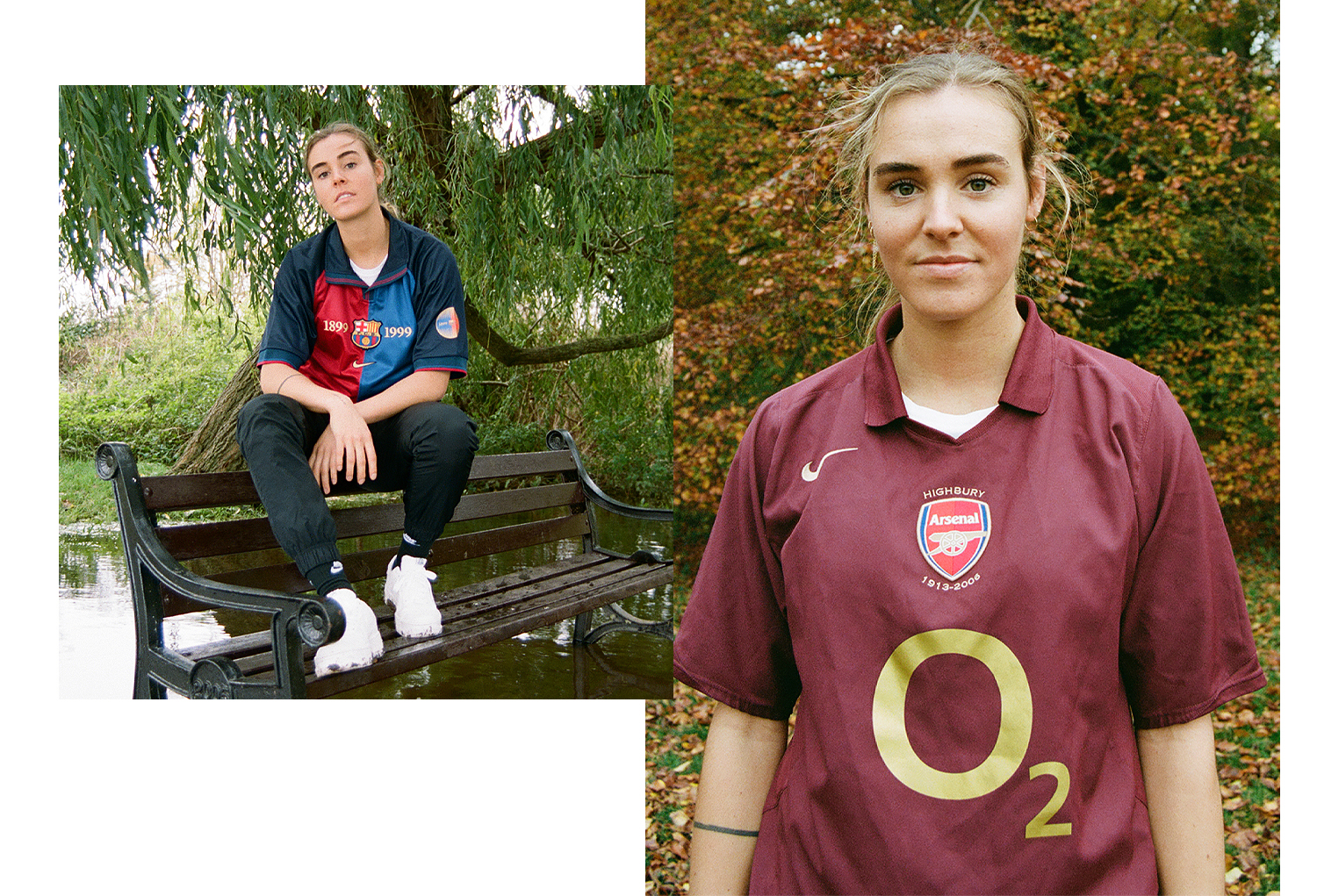 VERSUS: How’s the knee and when can we expect to see you bagging hat-tricks again?

Jill Roord: The knee is good, I started training again with the team recently. So yeah… I’m back!

You were the Eredivisie’s top goalscorer back when you played for FC Twente. Are you looking to dethrone Vivianne Miedema this season as the WSL’s Golden Boot winner?

That would be great, but I think it will be a really, really difficult thing to do, I’ll give it a go though! I definitely want to score as much as possible, but as a No.10, I’m all about being dominant with my passing, dribbling and making assists.

Me and Viv have a really good relationship, we go way back. We’ve known each other for ten years now and have spent a lot of time together on and off the pitch, we always support one another that’s for sure.

Yeah! My Dad and Marco are the same age, and they played in the national youth team together when they were a lot younger.

How much of an influence has your Dad had on you as a player?

Oh a lot! My Dad has been so influential on me as a player ever since I was a young kid really. We’ve always watched football, talked about football and analysed my games together.

You left Bayern to join Arsenal just over a year ago now, talk us through what encouraged you to make that move.

Definitely the league, it’s one of the best leagues in women’s football right now. The way Arsenal currently play suits me really well, the way Joe [Montemurro] wants to play, his footballing philosophy. I just had a good feeling about joining the club and working with him especially.

The investment in the WSL over the years, and the efforts to grow its fan base – almost 40,000 people turned up to watch the first women’s North London Derby at White Hart Lane last season – is exciting! Do you feel that excitement as a player?

The game is growing so fast! Teams like Tottenham and [Manchester] United are so impressive now, and that’s happened in quite a short amount of time. To play a team like Tottenham, at White Hart Lane, it definitely felt like a derby match.

What’s the best thing about living in London?

I just love the city! I love going into London and people watching, looking at the buildings. It’s a different atmosphere to Munich definitely, more cosmopolitan. London is a bit like Amsterdam but bigger! 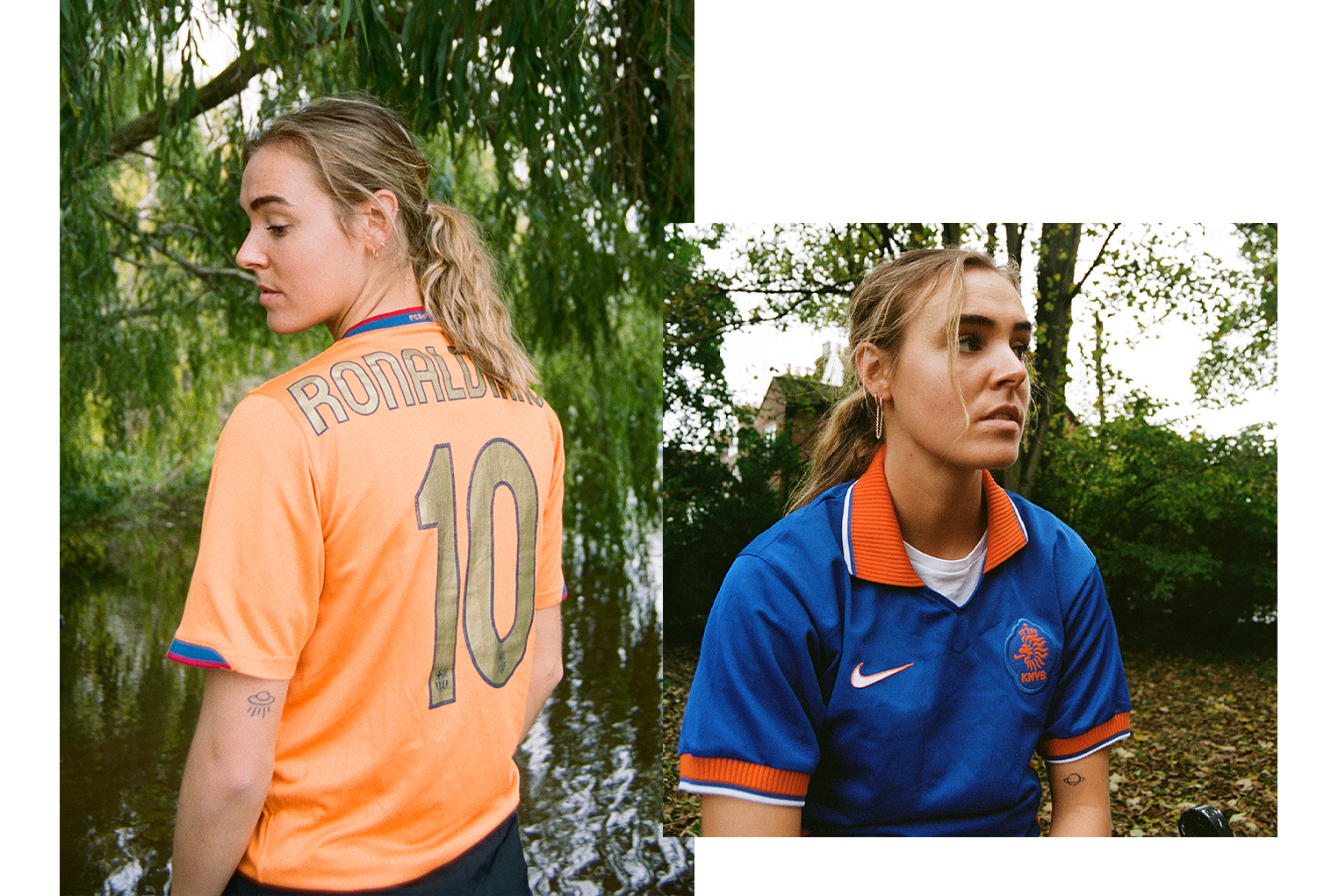 Talk to us about Ronaldinho. Why was he your footballing hero growing up?

He is an icon, a legend. I think Ronaldinho was the best player at the time he was playing football. I just loved his style of play, it was beautiful football. As a midfielder it’s the type of play I want to achieve in my own game.

Did you watch the classic ‘Jogo Bonito’ videos as a kid, practise hitting the crossbar again and again?

Yeah, definitely! I always watched videos of him doing skills and tricks, I tried to copy them all the time.

You made your Champions League debut at 16, won the European Championships at 20 and claimed a World Cup runners-up medal last year at 22. Pretty mad! What’s next for you?

I hope to keep winning prizes with the national team and to win the Champions League one day. Obviously I’m still young, and there is a lot of work left for me and for Arsenal to do at the moment. I just want to keep achieving things in football. Including beating Viv [Miedema] to the Golden Boot…but like I said, I don’t think that’s possible!

How excited are you about the future of the women’s Netherlands team?

It’s really exciting! We’ve achieved a lot in the last few years, but we have a squad made up of quite young players still. There is a lot of growing that needs to be done, we are going to the Olympics next year, it’ll be our debut.

What are your expectations for the Olympics?

I don’t know because I think it will be so different from a World Cup or the Euros.

It’ll be shorter for one, only two weeks, and I’ve heard the weather and environment in Tokyo is different to anywhere I’ve played before. But with the squad we’ve got, we have to go for gold!

There’s no doubt Viv [Miedema] will be going with you to Tokyo. You’ve said it’s good to have someone like her motivating you as a player at Arsenal. Growing up was it good to have that sort of competitive rivalry but also good to have her alongside you for the ride?

From the first game Viv and me played together, people always said we had natural chemistry and there’s always been really high expectations of the both of us.

It gives us a bit of pressure but we both like it. We always want to prove that we can keep up with expectations. I think playing alongside her brings out the best in me, we’ve got a strong bond. It’s a good combo!

We need to talk about your celebrations…you don’t have any!

Is not celebrating a Dutch thing?

I told Ian Wright it was a Dutch thing recently and then people said: ‘No it isn’t a Dutch thing, it’s a Jill and Viv thing!’

When I score in a match that ends up being 1-0, or a really important goal, I’ll celebrate aggressively.

I’m always happy when I score for sure, I’m just not the type of player that goes mad! I think we are just really down to earth players. It’s just always been like that. 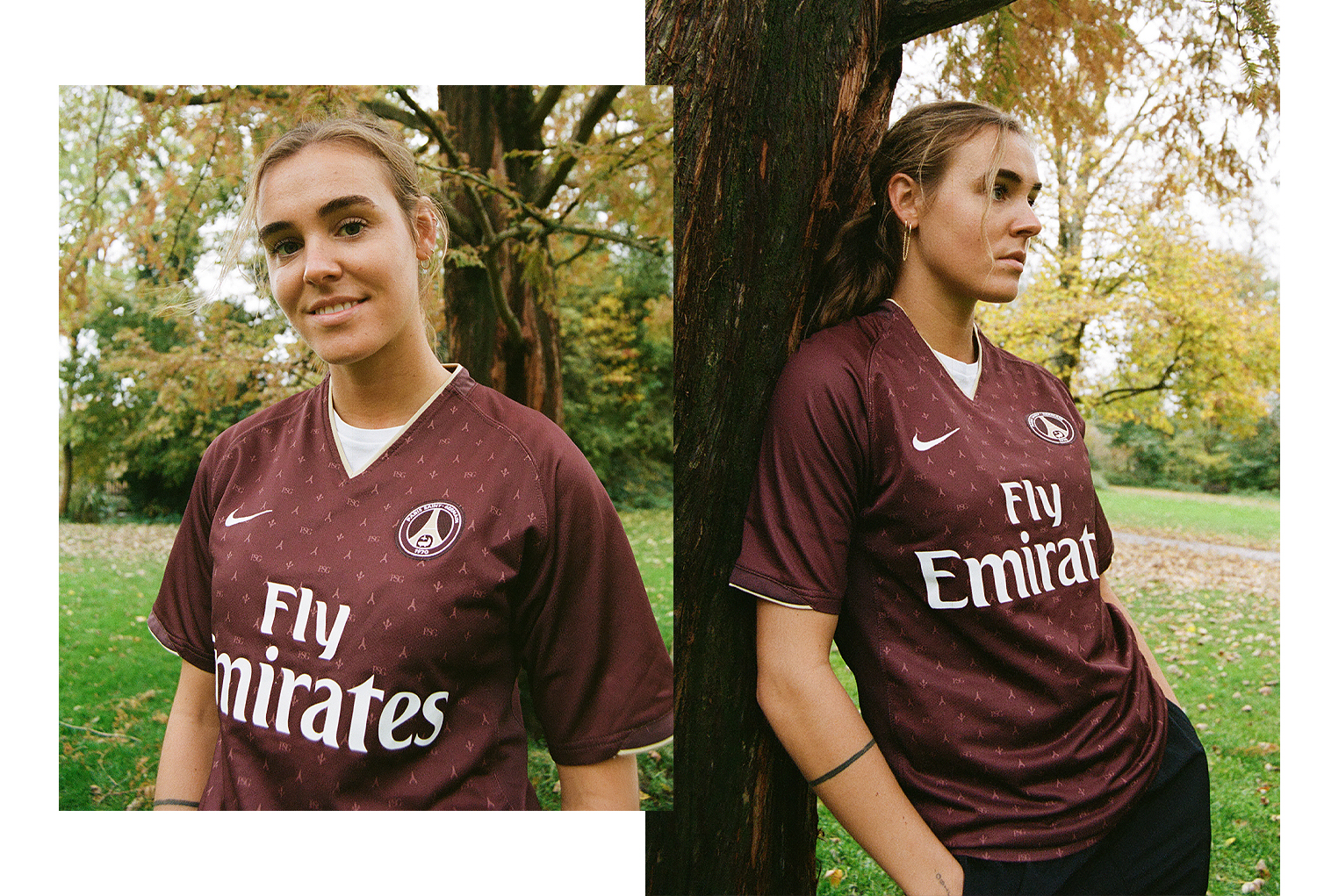 If you score in a Champions League final or get an Olympic gold medal, we might get a celebration?

There’s no denying the development of women’s football in Holland has been immense in recent years. Do you feel pressure when fans of the game say you’re part of this ‘Golden Age’ of female ballers?

Personally, I do feel like there’s pressure, not necessarily individually but as a team because we’ve achieved a lot and we are very popular now in Holland especially.

At the same time, if you don’t play well there is a lot of negative media attention which is normal I guess, but that also adds to the constant feeling of having to win and achieve things otherwise there’s a lot of negative reactions towards women’s football as a result.

When the press makes comments like that, what do you think when you hear them?

I mean, it’s part of the job. We always say we want to be as popular as the men’s teams and unfortunately that type of criticism comes with playing at a high level.

What’s your opinion on adidas’s latest collaboration with Pharrell, are you a fan of the tie-dye look?

Do you think it might be a good distraction technique against Spurs in the next NLD, not that you’ll need it…

Potentially! It is a crazy look, but I really do love it.

What’s been your favourite kit to play in?

I’m a big fan of Arsenal kits.The home shirts the last two seasons have been great, a return to the sort of classic look is something I like a lot. I also love our current Holland kit – the orange one – for that reason too.

My all-time favourite kit, probably today’s Barca one. I’ve always been a massive Barcelona fan, another reason why I love Ronaldinho.

What music are you currently listening to?

I like Dutch rap, old RnB and 90s music too. The only type of music I’m not a fan of is house.

Have any London artists managed to make their way onto your Spotify playlists?

I don’t know who is from London and who isn’t! I leave it to Leah Williamson, she’s the DJ in the changing rooms at Arsenal. I like her music, I can ask Leah about London artists.

Sarina Wiegman, one of best female Dutch players to put on a pair of boots, became Head Coach of the Lionesses recently. Are you sad to see her go and are our girls in for a shock?

We’ve worked together for such a long time, and it’s always sad to see people go but it’s a great opportunity for her.

Sarina’s been really important for us as a team. We’ve achieved so much with her as our coach and yeah, I think they [Lionesses] are in for a bit of a shock.

I think she’s really different from what they’re used to, I don’t know if the two styles are going to match but we are going to find out soon that’s for sure.

With current football, who are you enjoying watching at the minute?

Thiago was playing that style at Bayern, are you looking forward to seeing him do that Liverpool?

Definitely, I really like Liverpool and the way they play as a team.

Finally, you’re back, you’re fully fit, what’s the expectation for the rest of the season?

I think me and the team both started the season really well, I think it’s important we keep up performances like the ones we’ve been giving.

Winning the League is always there at the top of our goals, qualifying for The Champions League too. It’s so hard to say who will win as it’s only the start of the season, but I hope I play an important role in Arsenal’s challenge for the title.

All shirts worn by Jill Roord were provided by Classic Football Shirts, the world’s biggest seller of iconic football fits. 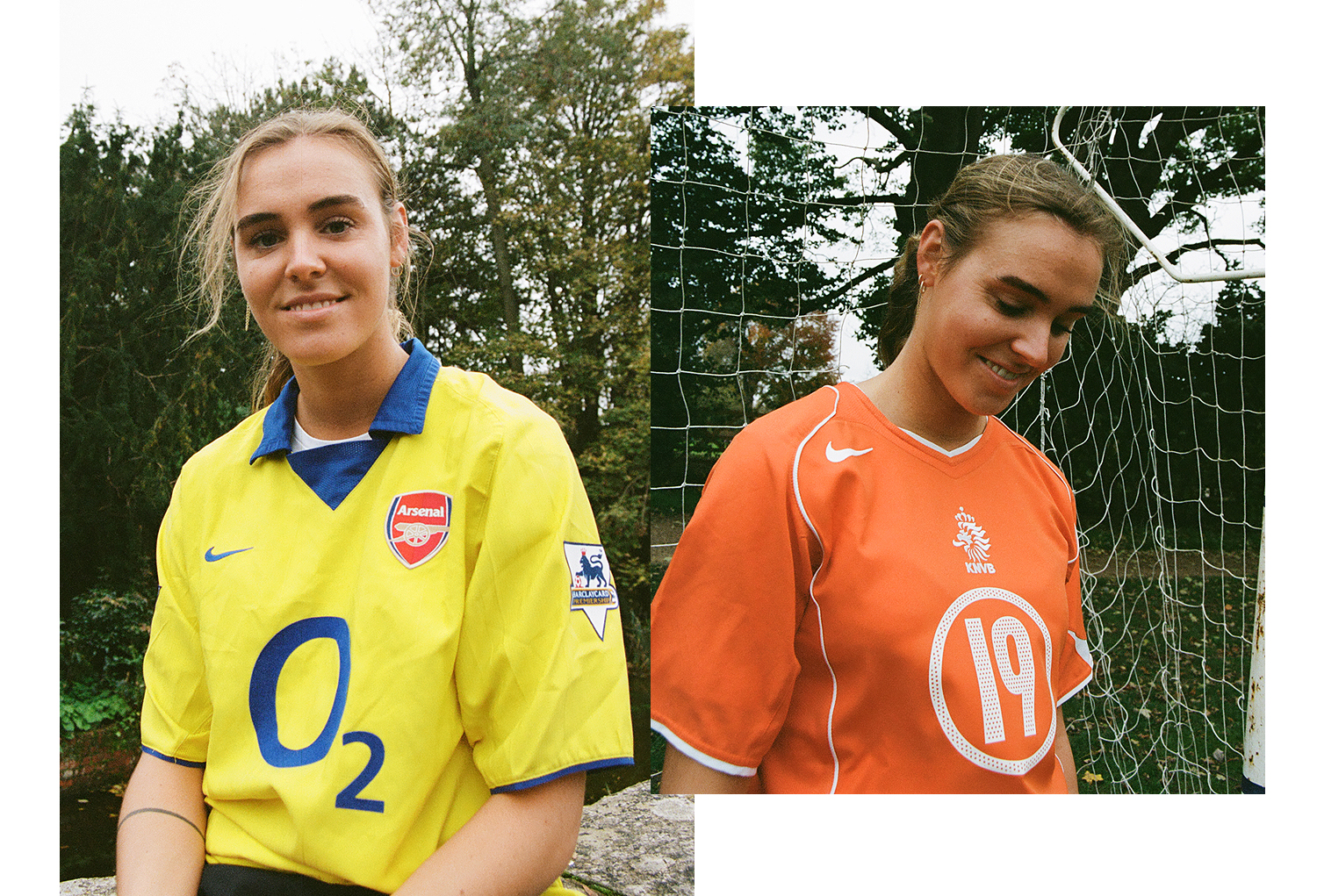