FIFA 22 was finally released last week and at first glance, it looked like EA Sports were trying to address the issue of gender equality in football. Alex Scott became the first English-speaking female commentator to pick up the mic in the history of the series, and female builds were introduced in Pro Clubs.

And while these steps have generated headlines and indicated an acknowledgement from EA Sports that they need to make the game more gender inclusive, if you looked beneath the surface and asked what the game is doing for women’s football – rather than women in football – you’ll be hard pressed to find many answers.

It’s six years since EA Sports introduced women’s football into FIFA for the first time ever, giving gamers the option to play as 12 national teams in Kick-Off mode and Online Friendlies. That year, the game had over 650 licensed teams from more than 20 countries. While 12 women’s teams was a small percentage, it felt like an important step forward for the game and the start of something special for women’s football in one of the sport’s biggest cultural brands.

Sadly, progress has been hard to find since that moment. Six years on, we still have just 15 women’s teams in the game out of EA’s 700+ licensed teams, which features 17,000 pro players. There’s no Women’s Super League. No NWSL. No Women’s Champions League. No sign of women’s football in career mode. Over the course of six whole years, these aren’t unreasonable expectations. 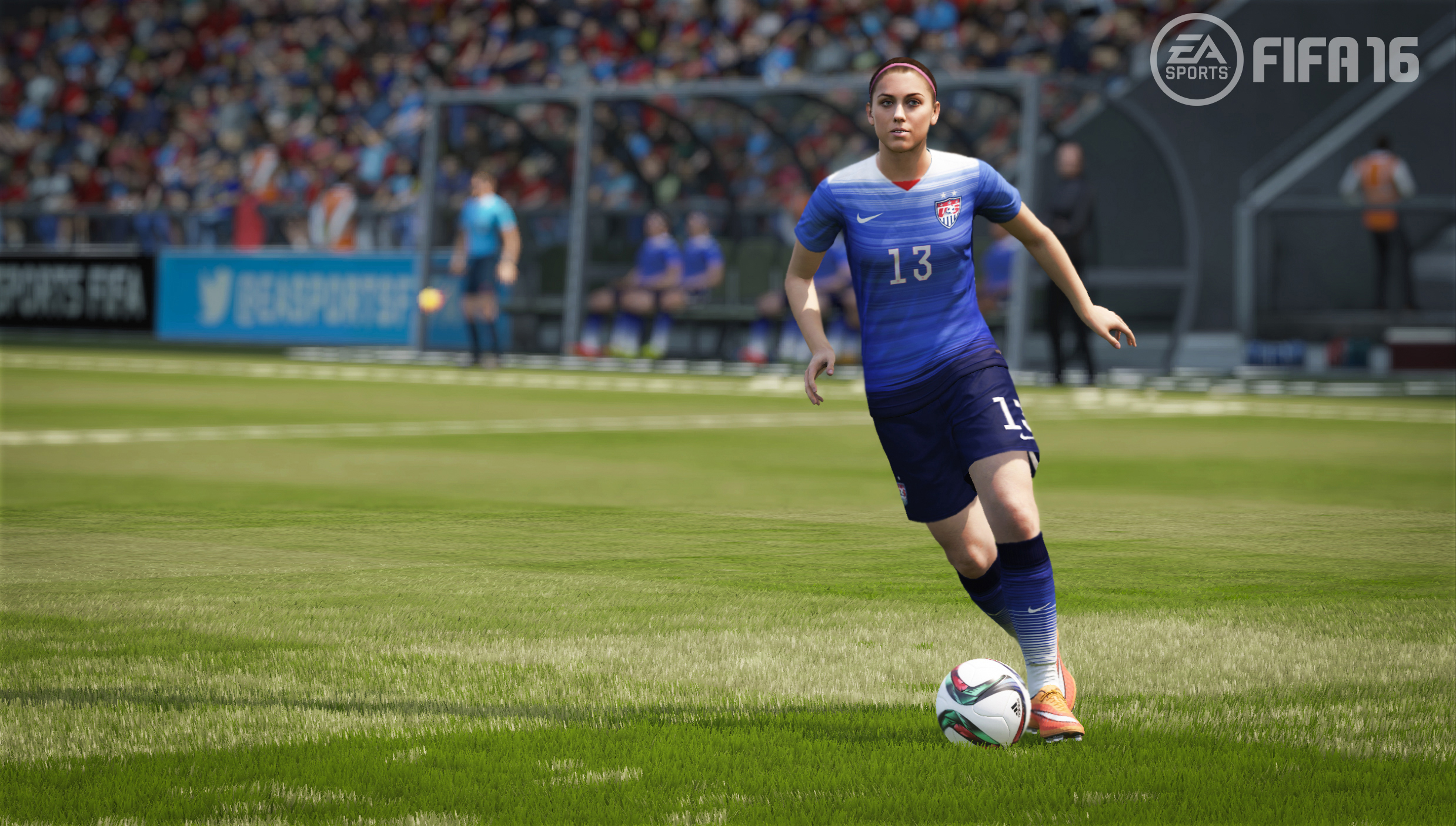 “The lack of ambition around women’s football in FIFA hasn’t been good enough.”

Representation in football matters now more than ever. Fans want to see themselves reflected in every aspect of the game. Whether it’s the players on the pitch, those commentating in the studio, or the option to play as their favourite women’s players in FIFA – representation makes the game all the more beautiful. The lack of ambition around women’s football in FIFA hasn’t been good enough and feels totally out of sync with the way the women’s game is growing around the world year-on-year.

It feels like there’s not enough attention to detail and there’s no greater case in point than this year’s player ratings.

Alex Morgan once again appeared in FIFA’s Top 22 list with a rating of 90 – despite only notching up five appearances for Spurs last season after returning from pregnancy – and there’s been some serious omissions altogether from FIFA 22’s highest rated list. UEFA’s Women’s Player of the Year Alexia Putellas didn’t even make the cut for this year’s edition of the game.

The Spaniard made history by captaining Barcelona Femini to the treble in 2020/21: the Primera División, Copa de la Reina and Women’s Champions League. Thousands of Data Reviewers and Talent Scouts – employed by EA Sports to help provide the most up-to-date player information on-hand – are clearly missing a trick. When gaping holes like this one appear, you can’t help but ask yourself: how much does EA Sports actually know about the women’s game?

There is no denying it takes an outrageous amount of time to create a game like FIFA. Nobody is debating that. But real investment needs to be made when it comes to ensuring the inclusion of women’s football isn’t deemed an afterthought. It’s something that Football Manager seems to understand.

Their one sport, one game approach shone through in their statement earlier this year after announcing plans to fully immerse women’s teams into the iconic simulation game. FM have been plugging away behind the scenes for a number of years already to ensure they have a strong foundation to do justice to the women’s game. They want every existing aspect of FM to be available for women’s football gameplay. No token gestures. And they’ve taken a considered approach to make sure they can be part of the solution that levels the playing field, in turn putting women’s football on an equal footing with the men’s game. Why can’t FIFA do the same? A glaringly obvious place to start would be fixing the likeness of players’ avatars.

Fran Kirby is a fifa 22 ambassador but they didn’t even bother to give her a face scan. I’m sorry but even I could do a better job than that. Sort it out! @EASPORTSFIFA pic.twitter.com/vjBs5csvAC

Chelsea’s Fran Kirby is one of the game’s most prolific attacking players. Super Fran is synonymous with WSL football and is somewhat of a poster girl for the English game. Yet you wouldn’t be able to pick her out of a FIFA 22 line-up as her avatar doesn’t look anything like the forward. We’ve seen this with male players too – apologies Harvey Elliot – but the main difference is: this has been an ongoing problem since the introduction of female players back in FIFA 16 and with such a small pool of female players in the game right now, there’s no excuse for not getting this right. Ask any FIFA player if accurate ratings and player likeness are basic fan expectations, and they’ll say ‘yes’.

Imagine being able to play with Arsenal’s Vivianne Miedema, Beth Mead and Nikita Parris up front? Or scoring a worldie off the back of some killer link-up play between Chelsea’s Pernille Harder and Sam Kerr? Winning El Clásico with Real Madrid Femenino? All things women’s football fans were hoping to happen in FIFA. It’s been six years since female players were introduced to the game and still fans haven’t been able to play as their favourite women’s football clubs.

Last season, Dua Lipa was introduced as the game’s first female celebrity player, an introduction that was more performative than purposeful. There has been no real addition or improvement to FIFA’s inclusion of women’s football in their latest edition. Japan have been removed from the roster, Belgium and Portugal have been added, Brazil have no registered players – gutting for Marta fans. Repackaging the game as new and improved shouldn’t be allowed if there isn’t anything new or improved about it. If fans can’t play as their favourite women’s teams in 2021, when will they finally be able to do so? EA Sports has a real opportunity to provide global exposure to the women’s game but they’re falling short every step of the way.

“Women’s football in FIFA could be one of the greatest amplification and awareness tools the sport ever has.”

There are millions of fans across the globe who learn about the game through playing FIFA. Those who don’t have regular viewing access to European and EFL football due to geography – big up those in North America who get up at the crack of dawn to watch the North London Derby – gain a lot of their club and player knowledge via the video game.

Imagine if women’s club level football were integrated fully into FIFA 22? It could be one of the greatest amplification and awareness tools the women’s game ever has. There’s a whole generation of players football fans do not know about. The inclusion of Megan Rapinoe, Sam Kerr and Wendy Renard is fantastic, but they won’t be kicking ball forever. FIFA is a powerful learning tool that could be used as one of the sport’s great equalisers.

In the last year alone we’ve seen the world’s biggest sports broadcasters invest millions of pounds into the women’s game, nations agree to pay their men’s and women’s teams the same wage, global brands include female ballers in global ad campaigns. All acts carried out to ensure women’s football continues to grow and belong in the ubiquitous mainstream. It is about time EA Sports took a stance and decided what side of the line they want to position themselves: either on the side of those willing to push the women’s game to new heights, or on the side of those willing to stand in the way of progress.

It’s in the game. Just make it an equal one.