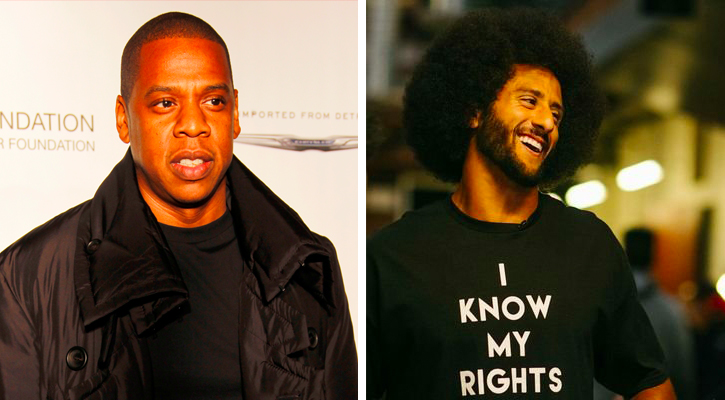 Over the weekend, Jay Z took to New York’s Meadows Music and Arts Festival for his first stage performance in his home town in three years.

Giving New Yorkers a first glimpse at his forthcoming 4:44 tour that kicks off later this month, Hov took time aside during his set to shout out former San Francisco 49ers quarterback Colin Kaepernick and also late comedian/activist Dick Gregory.

“I want to dedicate this song to Colin Kaepernick tonight,” Jay-Z said, getting into album track ‘The Story of O.J.’.

Kaepernick began protesting the national anthem back in the 2016 pre-season, with the aim of bringing awareness to racial injustice within America. Now, two weeks into the 2017 season, Kaepernick remains unsigned, highlighting the clearly conceivable notion he’s been blackballed by owners of NFL teams.

Hov standing behind Kap also comes hot on the heels of Super bowl MVP Tom Brady revealing his hopes for Kaepernick’s return: “I’ve always watched him and admired him, the way that he’s played he was a great young quarterback,” Brady told CBS News. “He came to our stadium and beat us and took his team to the Super Bowl. He accomplished a lot in the pros as a player. And he’s certainly qualified and I hope he gets a shot.”

The wheel are certainly turning in Kap’s favour at present but it looks highly unlikely an NFL team at this point reneges on the clear blackballing. The silver lining would appear to be the more uproar made, the closer we get to preventing similar situations befalling athletes in future.