Over the past decade, we have seen fashion and football fall in love. Every fashion brand and their Nan have joined the great football gold rush and we have been left with more “new” and “exciting” collabs than we can handle. The issue is, with these “new” and “exciting” collabs, is that a lot of them don’t appreciate the depth of the football culture. Brands charge into a complex world with no roadmap, slapping logos on jerseys and re-telling tired stories of “footballing heritage”. It doesn’t have to be this way, though. What if brands actually took the time to understand football culture? What if clubs only signed off on collaborations that resonated with their story? What if football-fashion collabs actually made sense? Here are five we would love to see. 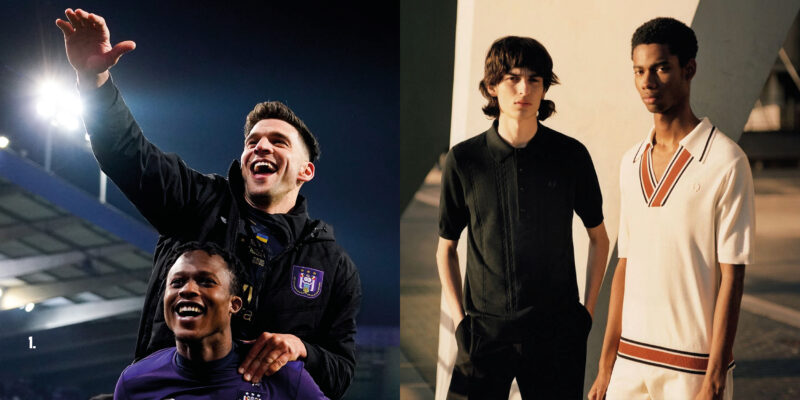 Fred Perry is a British icon. The fabled laurel wreaths have adorned the chests of young Britons up and down the land for more than half a century. The upper-left torso of mods, casuals, skinheads, rude girls, of Amy, Mike, Freddie and Terry were all decorated with that same broken circle. It’s a football fashion staple, too. Go to any ground in Britain and you’ll see the famous twin-tipped polo buttoned up to a hundred chins, fans subtly underlining their allegiance via the two coloured lines along each hem. If British football had a uniform, it would be made by Fred. 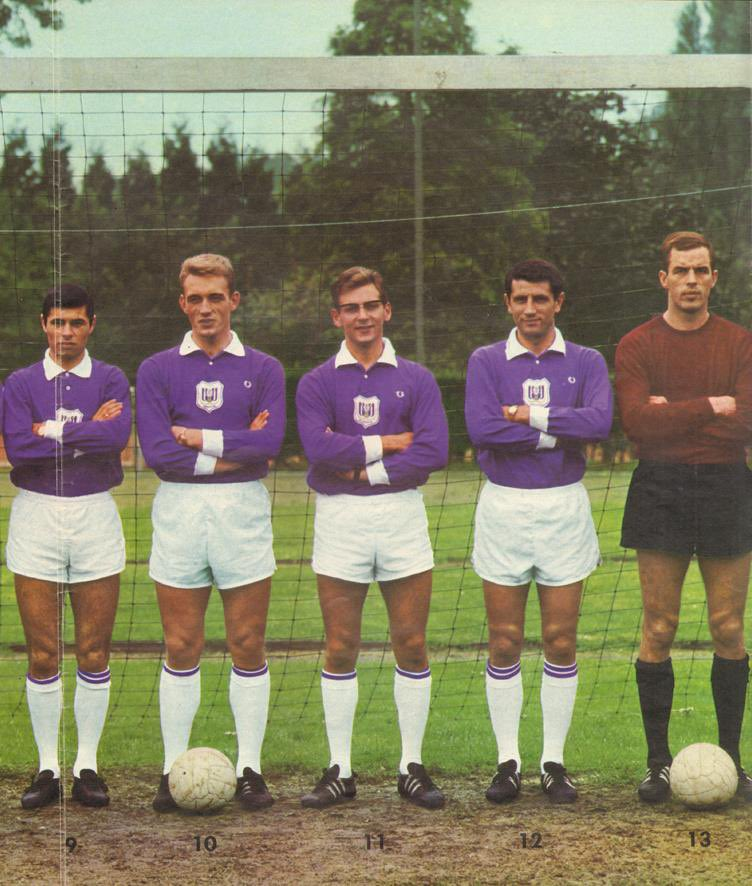 So, if Fred Perry is a British icon worn by British subcultures and British football fans at the British football, why are we suggesting that they collab with RSC Anderlecht, the biggest team in Belgium? It’s a fair question. It’s because last time they did it, they produced some all-time teamwear. In the late 1960s, Fred got the call from across the Channel to manufacture kits for Anderlecht, as well as their rivals Club Bruges and Standard Liege. The result, a typically elegant centre-badge Fred design in explosive RSCA purple, is one of football’s greatest forgotten gems. 2023 is the year to re-up this collab and get Fred back in the beautiful game. 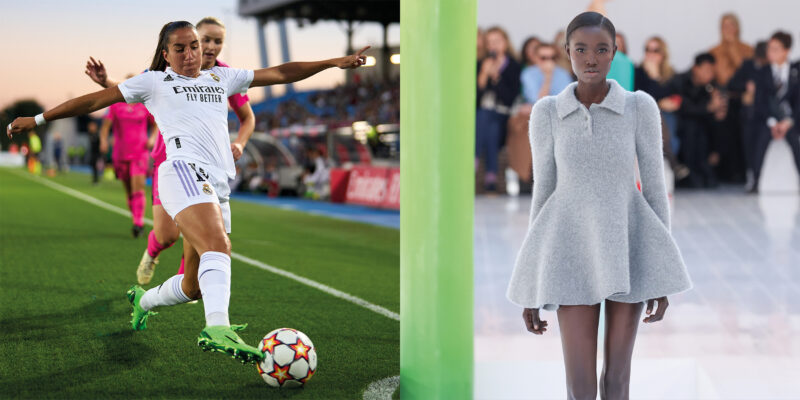 Real Madrid have an aura of wealth around them that no other club can match. No matter how hard PSG, Juventus or Bayern try, the spotless white army at La Casa Blanca have an untouchable grandeur that borders on the perverse. For most people, this perpetual exhibition of elitism is a turn off – Super League, Perez, €60m on a 16-year-old etc. – but it does leave the club in a unique position in the fashion world. No-one else can match a fashion house for luxury. No other club can operate on that level. Lean into it and they could make something unprecedented. Two cultural titans of the Spanish capital, coming together to create footballing opulence. The most luxurious football fashion collab there’s ever been. 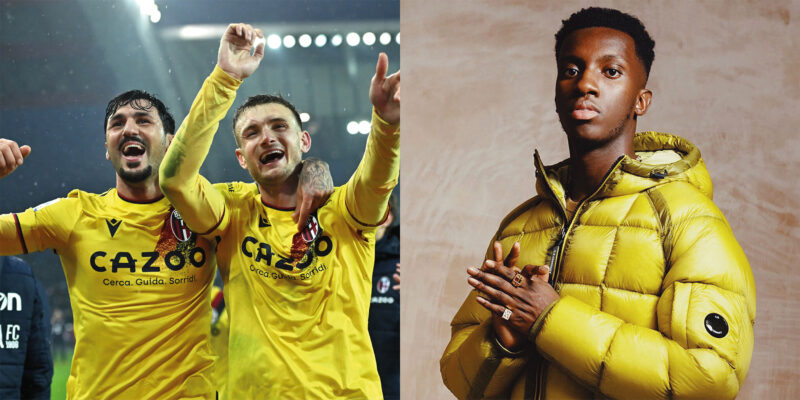 When you think of C.P. Company and football, it’s usually goggle hats on the terraces, loud jackets in dingy pubs or, occasionally, excellent VERSUS-produced editorials. What if it was different, though? What if C.P., founded by the “godfather of sportswear”, turned their sights to producing some on-field magic? How would they apply the experimental philosophy that made them famous to teamwear?

The first thing they’d need is a team to kit out. Who better than their hometown club of Bologna? Massimo Osti founded the brand as Chester Perry in 1971 and, for the last 50 years, C.P. Company has pioneered cutting-edge fabric innovation from Crevalcore – a small town just 40 minutes from the Stadio Renato Dall’Ara. C.P. would have I Veltri playing in some of the most technologically advanced football gear we’ve ever seen. Fabrics that prevent sweat from even forming, training-wear that could survive in space, the warmest bench coats that have ever been stitched. Catch Thiago Motta doing sideline analysis through the digitised goggles of Miglia Mille, some Terminator, Google Glass type stuff. The people need it and, by people, we mean streetwear heads willing to drop a bag on a weird jacket. Molto bene. 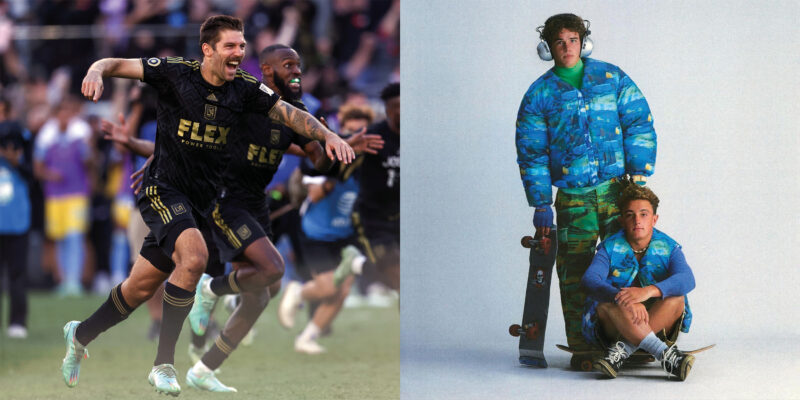 The brainchild of Venice Beach native Eli Russell Linnetz, ERL is 21st Century California cut and sewn. With a deliberately anti-European, nonconformist attitude on how high fashion should exist, Linnetz focuses on bringing his hometown’s brash self-reliance to the world. Who better then, to partner LA’s newest and most petulant MLS side, Los Angeles FC? The Black and Gold have been tearing up the league since their formation in 2018 (the same year ERL was founded) and don’t look like slowing down. They’ve won two Supporters Shields, a single MLS Cup and narrowly missed out on a CONCACAF Champions League in 2020.

Together, the two LA upstarts have an opportunity to make some uniquely-Californian magic. Take ERL’s Venice Beach-inspired haute Americana, add in the LAFC’s famous party atmosphere and you have a recipe for something great. Slogan tees, loud pattern shirts, footballers actually wearing decent jeans – it could have it all. Who’s better positioned to nail a football version of the NBA’s “tunnel fits” than the US’ coolest team? The MLS has finally realised that their USP as a league is their Americanity, their showmanship – ERL is the perfect partner to bring a sartorial flavour to the carnival. 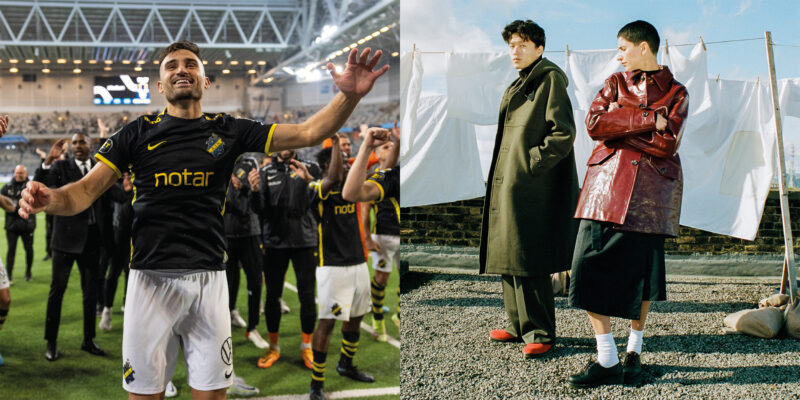 Since taking over AIK’s kit manufacture from adidas in 2018, Nike have been quietly using the Swedish club as a playground for some of their best designs. From shimmering blackout numbers to highly-limited anniversary shirts, AIK are living through a swoosh-powered jersey golden age. It’s only natural, though, as fashion is part of the Gnaget history. In the late 1920s, AIK played a style of football so easy on the eye that it was referred to as “smokinglir”, or “tuxedo play”. It became a term not only used to describe the team but also the way the club looked and behaved off the field.

There’s only one option if we’re looking for a brand to reinvigorate the “tuxedo squad” for 2023: OUR LEGACY. Effortlessly cool and inconspicuously subversive, the Stockholm label takes classic Scandinavian silhouettes and updates them for the modern consumer. They make clothes that would look good on anyone. Quietly perfect cuts, palettes and textures – OUR LEGACY exists in “the junction between familiar and irregular”. Imagine an AIK bench in the future, replete with handsome Swedes in beautiful mohair cardigans. Their heads turn in unison, nonchalantly following the Allsvenskan soccer unfolding in front of them. It’s a goal! Satisfied half smiles all round. Smooth out the wrinkle of your perfectly-fitting wool trousers. They have ascended. They are the coolest team in the world.