The Arsenal Family came out in full force to welcome home Continental Champions Rafaelle Souza, Beth Mead, Lotte Wubben-Moy and Leah Williamson in celebration of their historic achievements this summer.

The welcome party included the Gunners’ men’s and women’s first teams, both managers Jonas Eidevall and Mikel Arteta, as well as the whole of London Colney’s staff members. But most importantly, the North London club made sure several champions from the women’s football community were in attendance to share in the special occasion – after all, the game is nothing without its fans. 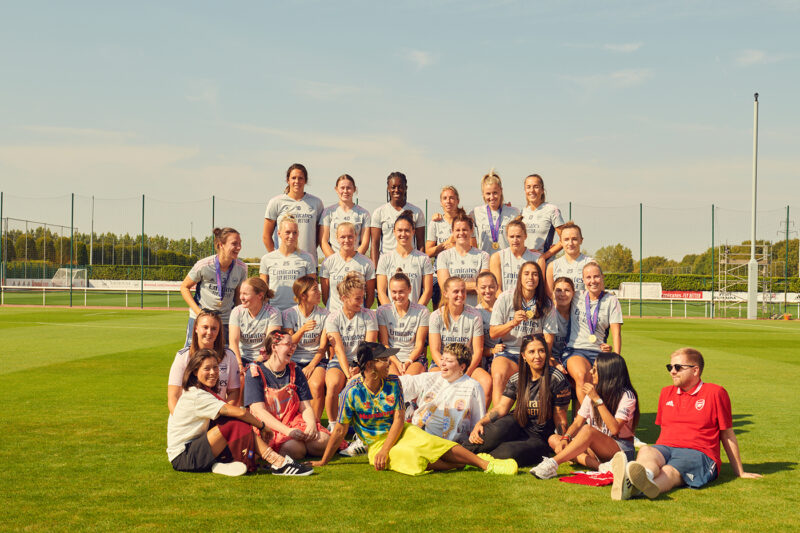 The biggest summer in women’s football history saw Williamson captain England to a historic win at the UEFA Women’s Euros, where teammate Mead picked up both the Player of the Tournament and Golden Boot awards for her six goals and five assists.

Both captains will face-off in the inaugural Women’s Finalissima next year, but for now, they’re determined to build on their international success in the hope of taking Arsenal as far as they can this season.

“I’m feeling very excited about the upcoming season!” Souza told VERSUS whilst making sure as many fans and teammates as possible had a chance to wear her medal. “I didn’t get as much of a chance to play last year, but now I feel healthy and just so pumped to play for Arsenal.

“To miss out on the league title by one point, that still hurts, but I think we’re ready to show everyone what we’re made of. And I’m so happy to play with this team, they’ve got the mentality of winners, something I want to help them build on to become champions.”

Teammate Wubben-Moy, the driving force behind the Lionesses’ public letter advocating for an ongoing Euros legacy allowing all schoolgirls the opportunity to play football, echoed Souza’s enthusiasm for the new season and highlighted the importance of building on their recent international wins.

“Both tournaments have shown how much women’s football is on the rise. And it’s sick knowing that rise isn’t centered in one place geographically – not one area is benefitting from the investment or from the increased visibility – it’s worldwide and that’s what we’re here for!

“We’ve got awesome supporters everywhere, not just in London, and we definitely feel that support moving into the new season.” 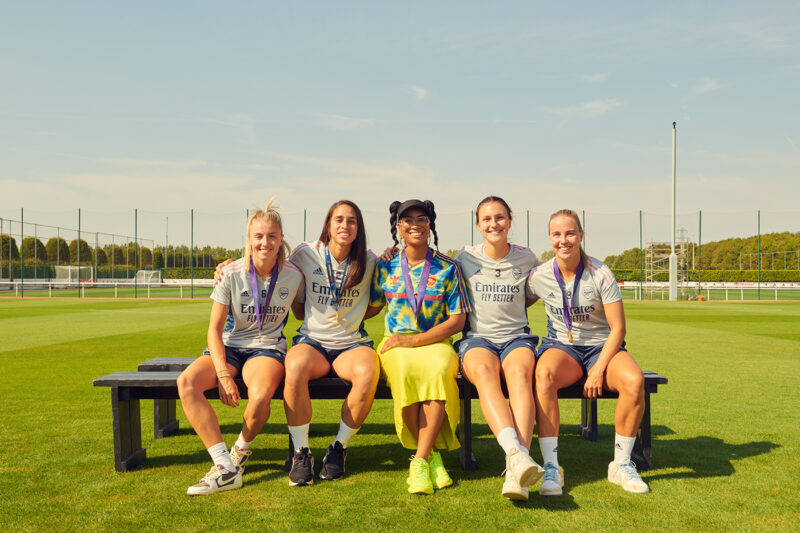 Some of those fans were in attendance for the players’ ‘homecoming’, including Romance FC Founder, Trish Lewis, and DJ Lucy Monkman, who both explained to VERSUS why they think this is just the beginning for women’s football as we know it.

“I think it’s the beginning for a whole new generation of young girls and women being able to access the game and see themselves as pros,” said Lewis. “The fact we were able to fill out Wembley is just an example of what’s more to come.

“Teams being able to play at major stadiums is going to be huge! Getting ‘bums on seats’ I think is such a great example of, even though the women’s game hasn’t been as heavily invested in as the men’s game, what that England team were able to achieve especially. It represented a country coming together in support of incredible players. Seeing that as a youngster would have been so encouraging.” 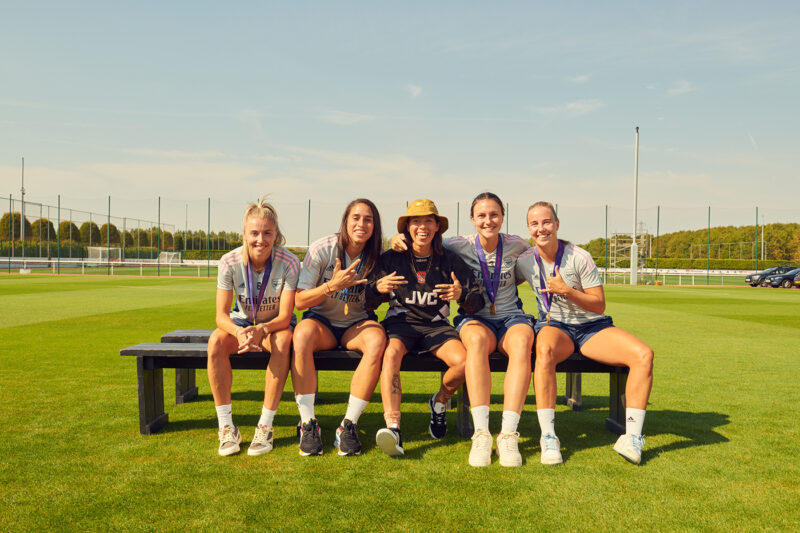 Being able to ‘see yourself’ on the biggest of stages is something fans across the Pond have been witnessing for decades. “If you compare what this England team has done to the famous ‘99-ers’…whenever I talk to my American pals about them having grown up with women’s football, that was such a historic moment in time,” explained Monkman.

“That group of women inspired a nation and a generation of women to fall in love with the game and see it as ‘theirs’. From then on, you saw world domination. That is what I hope this moment does for us.

“This is the start of something ‘big’, it’s the pivotal moment we’ve all been waiting for – to see the game pick up momentum and pick up a pace we’ve never really seen before, that’s so exciting.”

Women’s football today, is a far cry from where the game started. “I think it’s so important to remember where we’ve come from, and we’re so aware of that as a team,” lifelong Gunner and European Champion Williamson told VERSUS. “We are aware of the journey players before us had – all the way back to the ban – and it’s important for us to learn and understand those moments compared to what the game is now.

“We know we have a responsibility to make the most of it now, because they just didn’t have access to what we have nowadays. But in terms of what’s just happened, it felt like a real moment in terms of sustainability of the game. The difference now is, we’ve reached a ‘real’ level, and we want to stay there.”

One way of ensuring that level is maintained is by making sure women’s games are played at bigger stadiums, something Arsenal are doing for their upcoming North London Derby fixture next month – having already sold 30,000+ tickets, a new club record. 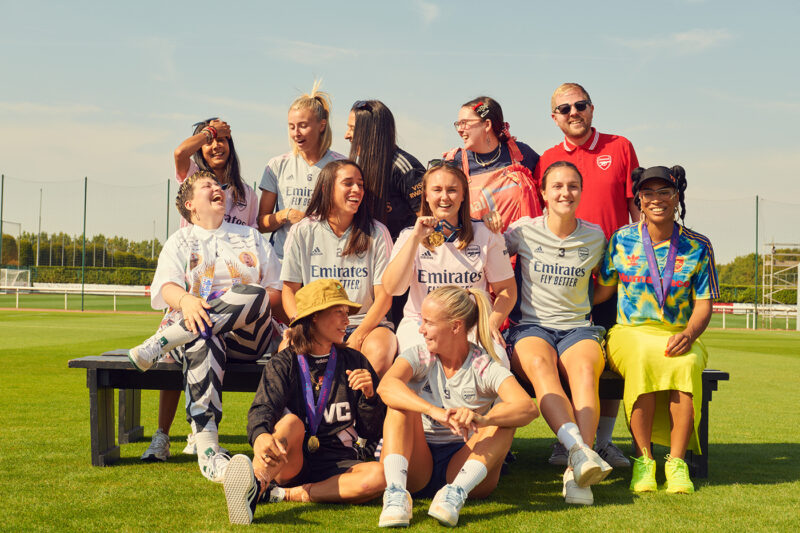 “We want more!” said Mead when asked about the upcoming game. “We want to sell out the Emirates, that’s our expectation now. We don’t want to settle for ‘however many’ people turning up, we want every stadium we play in to be sold out.

“We want people to keep coming back, and what’s funny is, when people do come to our games, they really enjoy them! So, we just need more of those fans to realise that and give up their time to something they’ll no doubt end up loving!”

The club’s champions will be back representing Arsenal on September 11, when they take on Manchester City in their first WSL game of the season, but it’s the North London Derby fans are already looking forward to. A game set to be one of the biggest matches the domestic game has ever seen. Make sure you’re a part of this potentially record-breaking moment by purchasing tickets here.

Check out some of the shots from the welcome party below, taken by Arsenal fan and photographer Danika Magdelena. 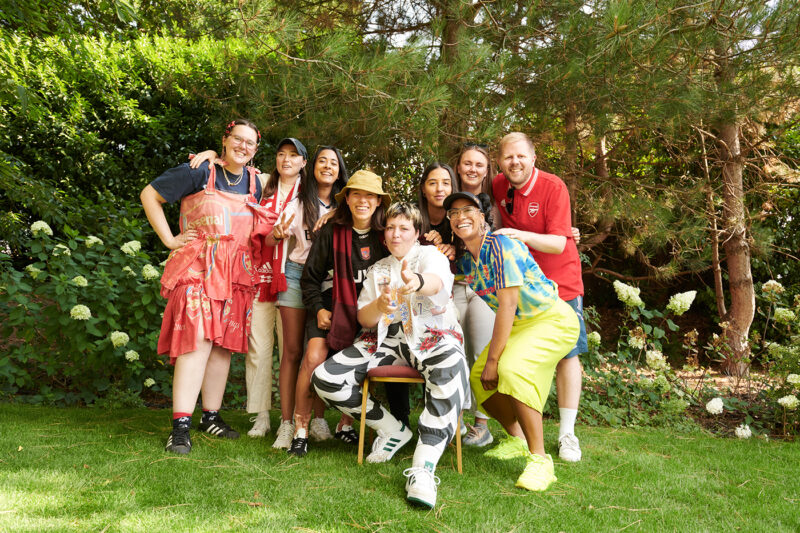 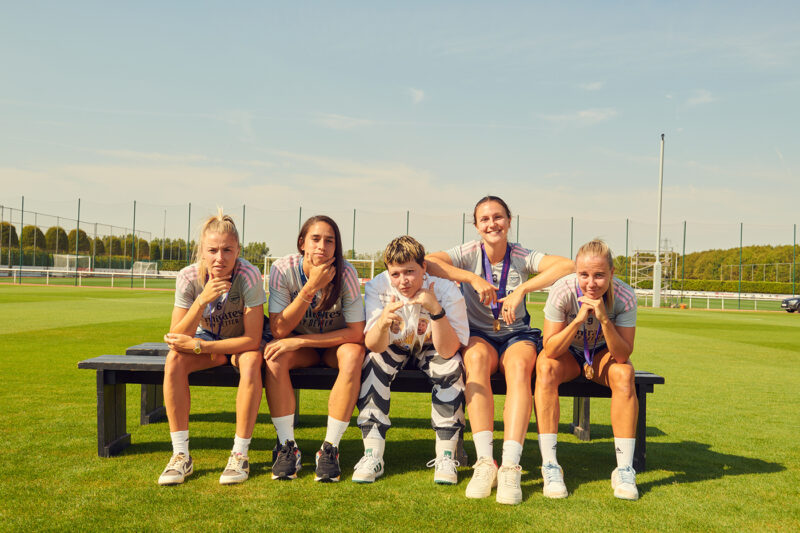 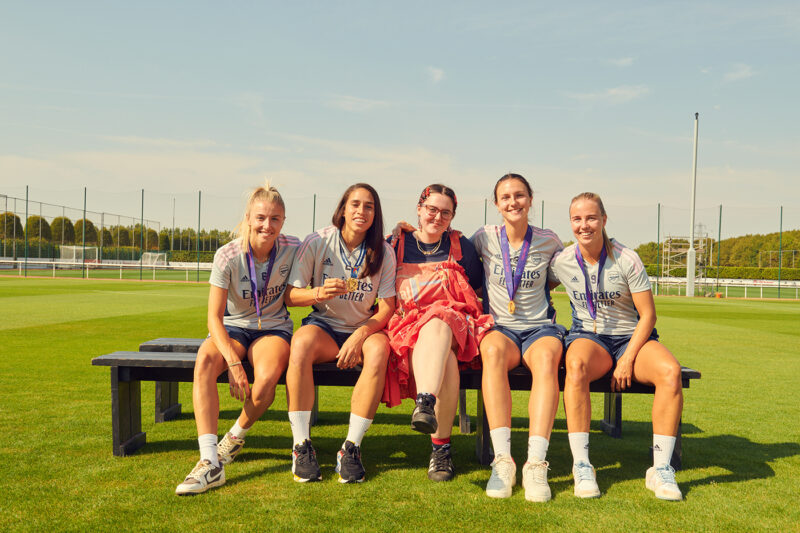 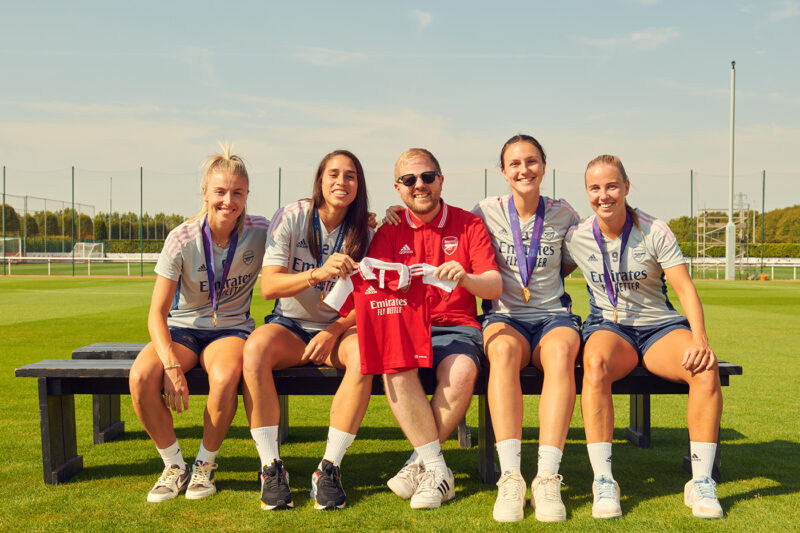 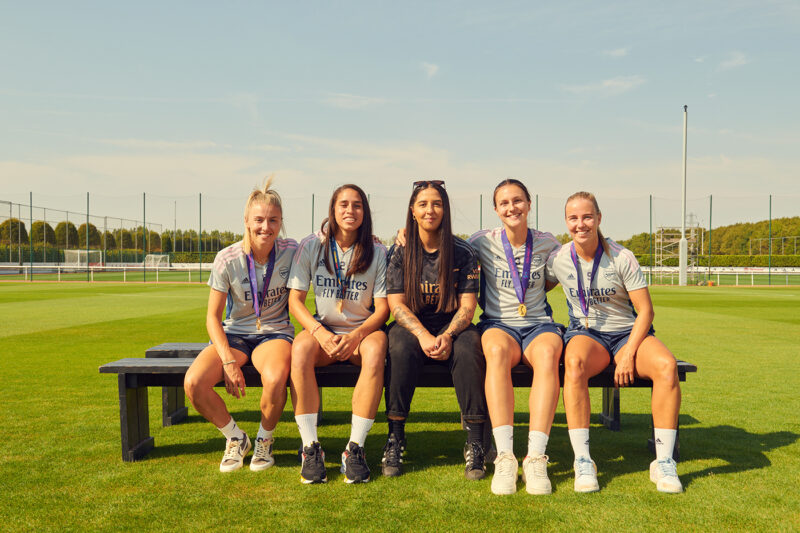 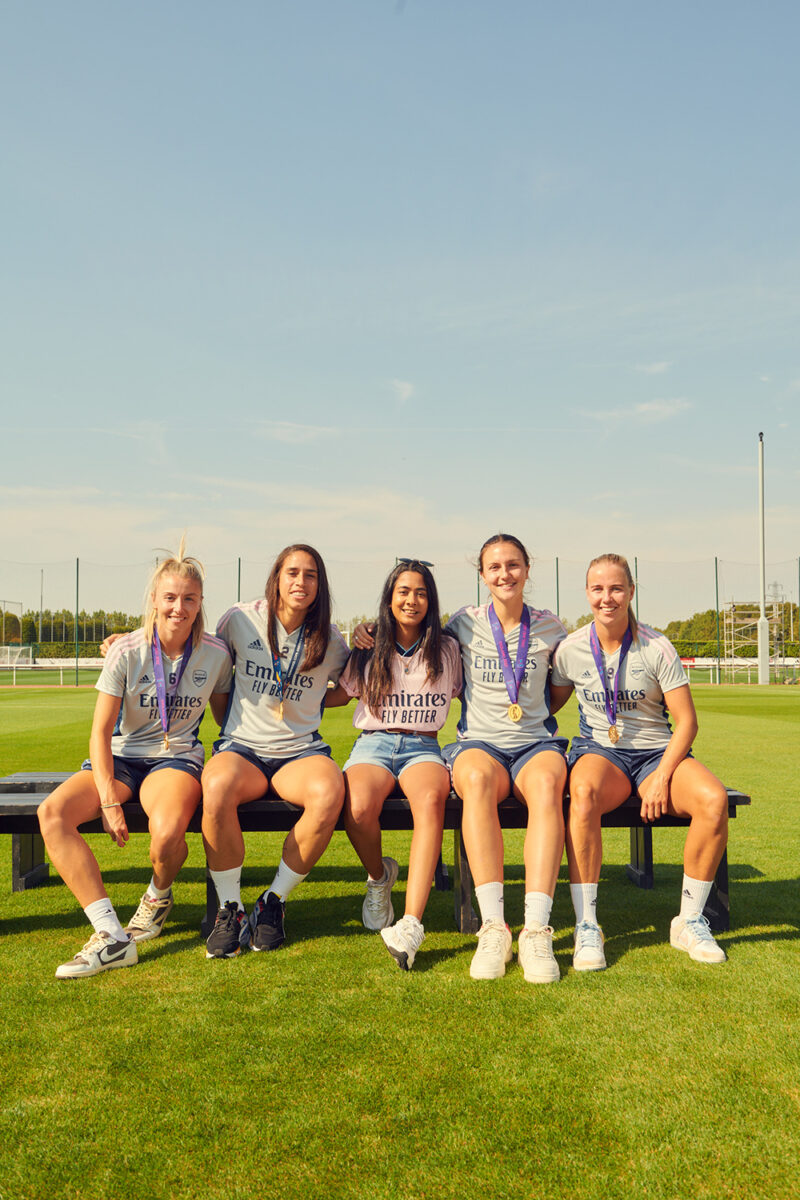