The two teenagers have become a viral sensation in the last 12 months, blessed with an innate ability to create chart bangers and all the charisma required to go straight to the top.

After meeting on Houseparty during lockdown, 16-year-old A1 (born Phineas Waweru) and 18-year-old J1 (born Joshua Somerkun) are well on their way to becoming household names in UK music, shutting down TikTok and the charts with their catchy, algorithm-adjacent tracks

Hailing from Cov and Kent respectively, the boys are divided by the teams they support, but have a united vision of where they’re gonna take their music. That much is clear looking at their track record of hits they’ve loaded up in their Arsenal so far, which has seen them appear left, right and Chelsea on socials and streaming platforms.

For context, their last four tracks have racked up over 50 million YouTube views and over 250 million Spotify streams. The duo’s debut single "Latest Trends" in February 2021, which charted at number 2 in the UK and was remixed by Aitch and A Boogie wit da Hoodie – but the duo have been anything but a one hit wonder. They blew up once again after jumping on SwitchOTR‘s Avicii-sampling drill-inspired single “Coming For You”, before linking up with Tion Wayne for “Night Away (Dance)” – another pop-sampling viral sensation.

We linked up with the boys at Nine Elms Powerleague to test out their tek away from the studio, discover why their chemistry in the booth is built different from your average and discuss their plans to swap Sunday League kick-abouts for Platinum plaques. 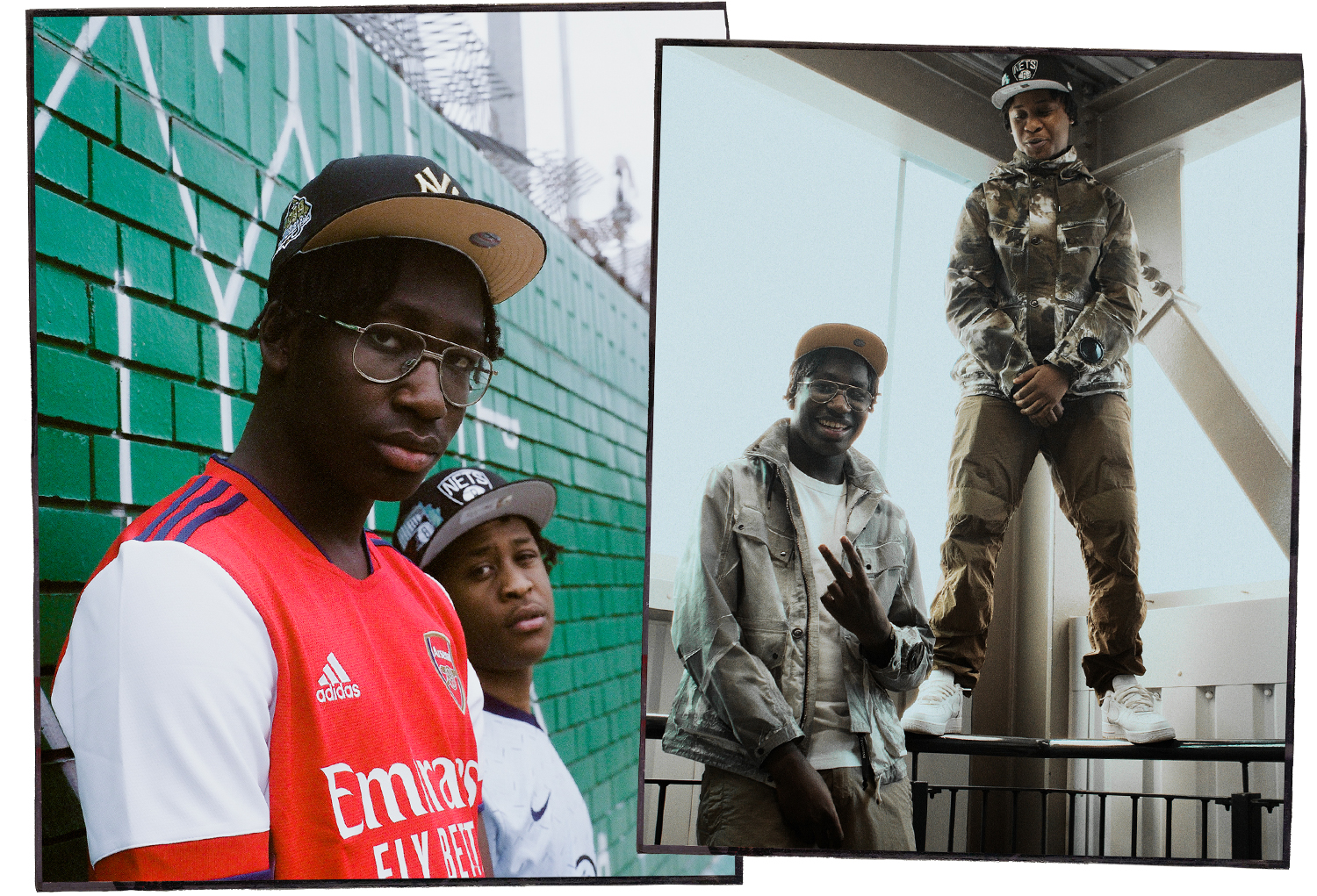 VERSUS: A1 you’re Chelsea, and J1, we know you’re a big Gooner. Has that always been the case since day one?

J1: Yeah I’m Arsenal through and through. Since day 1. My family all supported Chelsea actually, so I sort of went against the grain.

A1: That says a lot about what type of guy he is, innit! I’m a Chelsea boy through and through. They were the best when I was growing up, and they’re still the best now! Arsenal’s ting is peak right now… only thing you’ve seen lifted is The FA Cup right? You might remember The Prem, I guess…

You guys first linked up during lockdown on Houseparty… what sort of time was that like for you?

A1: The Houseparty link up was 2020… but we actually linked up a year before that, in 2019. Houseparty was always popping, even before the pandemic.

J1: But the music thing just happened so naturally from that. We’d just be talking on the phone about everything before we ever linked up. It’s always been a good vibe.

And then you linked up in real life after doing everything virtually… what was it like meeting for the first time?

A1: I’m 6 foot man, don’t let them tell you otherwise… J1 is just massive… I was actually in shock about how tall he was in real life.

J1: Mans out here balling like Bukayo Saka. Got to be Lil Chilli.

A1: Oooof… see, I’m a finisher. So I’d have to say Drogba. J1 can lay me up with the through balls… I stick it in the back of the net. Clinical in the booth, clinical on the track.

Who was pushing getting the music out the most?

J1: A1 didn’t even want our first track together to release. He needed a lot of persuading! I saw the vision though. I just told him, “trust me, this one’s a banger!”

You were both thinking about levelling up in the music game before you linked up. How young were you when you first started adopting that mindset to taking it seriously?

A1: I can’t lie, music’s always been in my blood. I used to play drums in church back in the day. That’s how I got the rhythm naturally from early.

J1: I got inspired by one of my friends from school, called Adzmilli. I was just going through his Instagram and thought I need to do this too! 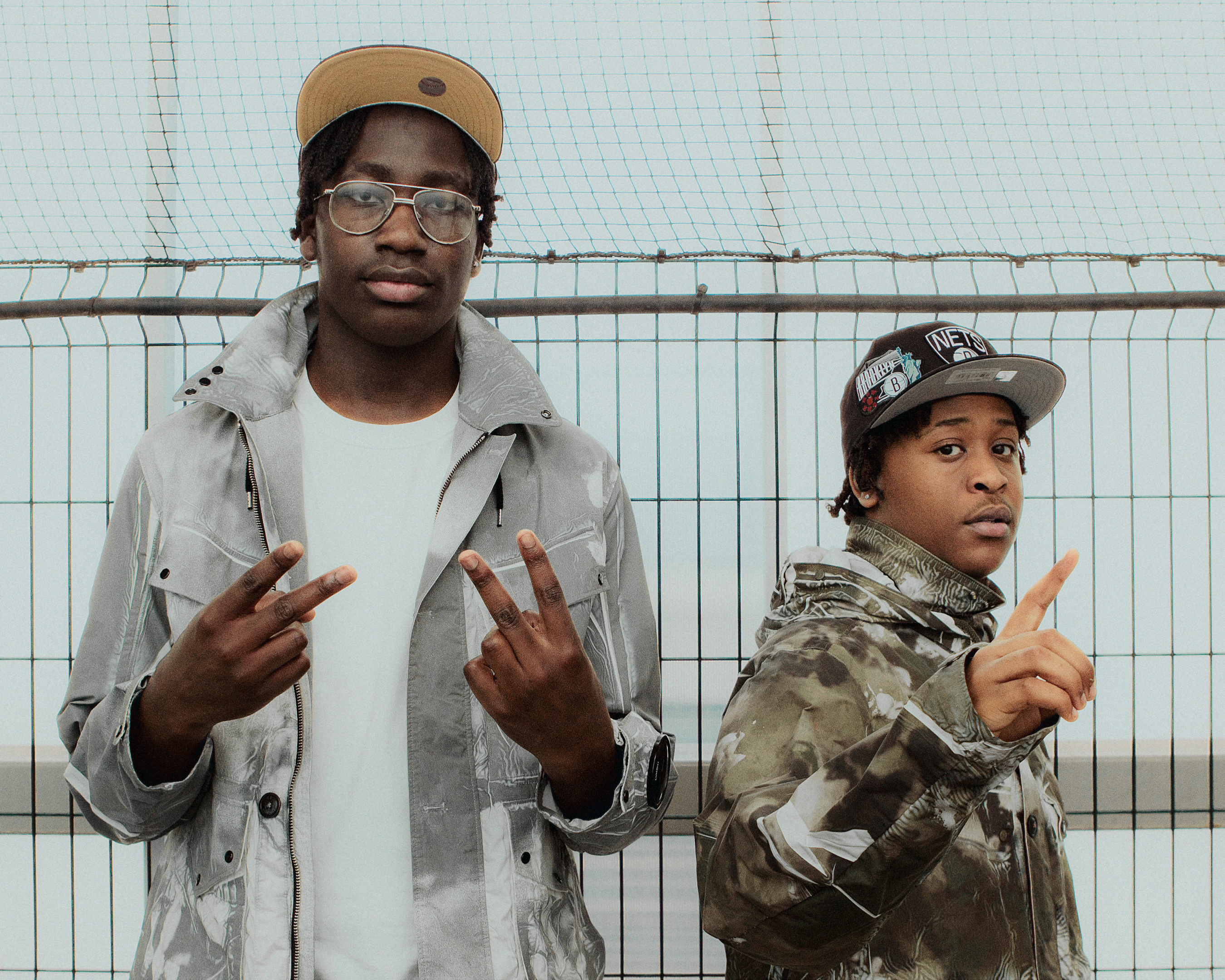 What inspires your creative process and what you’re jotting down in the note pad?

J1: Everyday life man. Like today, I could just say: “I pulled up here with VERSUS and started dropping verses.” Just like that.

We’ll be waiting to hear that on the next single then! Are there any other UK artists that have inspired your work?

J1: Stormzy and Dave are obviously mad inspirational for us…

A1: The people at the top of the game, man. They’ve broken down the barriers for us – and we want to be on that level. Cench, Dave, those guys we look up to a lot. It’s all timing man!

You’ve got to attribute most of your success to social media. How powerful do you think socials are in 2022 for artists trying to blow, like yourselves?

A1: It’s actually crazy, bro. There are so many different apps out there that if you use right, you can go to different places. TikTok is so powerful – you’ll see a sound on your ‘For You’ page yeah, and it might have, like, 400k views. It’s a formula we definitely try and tap into, cos we just know what sort of sounds are gonna pop in that format.

You’ve built up a distinctive musical ability of adding own flavour to pop bangers from the past – how much of that creative and curation is your choice in terms of knowing which track will hit?

A1: You know what’s crazy, when we’re in the studio together we just know we’ve got a banger on our hands.

J1: Facts. We’ll just be with everyone in the studio and everyone in that room will just know we’ve got one. We’ve got full creative control over our tracks – and even this track we’re about to drop, it’s due to be magic.

Did you have ambitions of kicking ball before you got into music?

J1: That’s actually a good question you know! I did, still.

A1: I was actually one of the best in my school at kicking ball. Not even to gas it or anything – I was serious about ball. It wasn’t even an injury that stopped me from playing, though. My mum and dad broke up, so I just didn’t have anyone to take me to training. So when I couldn’t train, that’s where music came in.

J1: I used to go to some Sunday league place in Essex fam. How old was I…I must’ve been like 14? And I did that for a year straight. But then I just stopped.

A1: I can’t lie, right now I’m trying to get back into my football man. I feel like I can be the player I once was now.

Football inspires a lot of your work – and we’ve seen Evra shouting out your lyrics recently. How much does football inspire your music?

J1: Sometimes I’ll be watching a game and I’ll just see a player, go to my notepad and write a bar. If I see a skill I like, or a move that they do on the pitch, I’ll write something and get creativity from that.

A1: Another thing as well, with writing especially, football is one of the most viewed sports in the world. So it’s only right we include something people can relate to. People are watching the game with with us, so linking lyrics in that people can really feel on a similar level is something I try and do for sure. 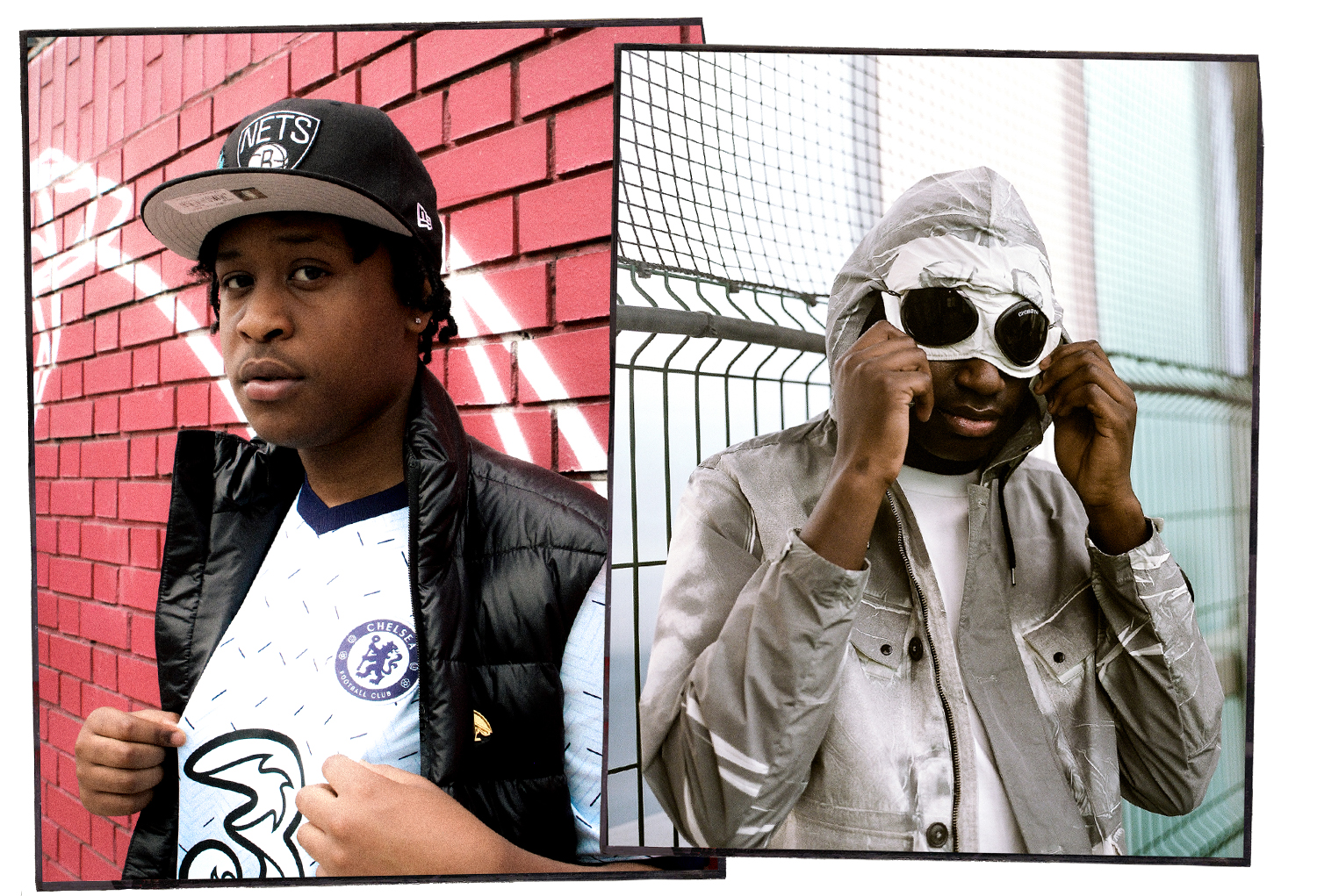 Having both kicked ball from a young age, how much of your mentality from football do you take into your music?

A1: Definitely. Now I’ve deeped it – music is the same as sport in that respect. You’ve got to put the work in, have determination, all of that.

J1: I’m my own biggest competition! Whether that’s music or ball, it’s always on me to level myself up.

You were at the studio before this with the time off you’ve had this week – what was the vibe like?

A1: We were actually recording our single that’s coming out next. Putting the little finishing touches on it… it’s gonna be a banger, still.

You’re from Coventry and Kent respectively but London’s a place where you link up a lot – is the vision to move to here as soon as possible?

A1: I’m actually from London originally from West, in Edgware before I moved to Coventry. House prices are mad here though! We might have to land a couple of Number 1s before I think about it more seriously!

J1: I would always wanna stay in my area cos I just love it so much.

If you were to compare your creative process and songs to a football team, what team would you compare it to?

A1: I’d have to say Liverpool. They’re flying right now – so it’s only right to compare them to us!

A1: You what?! You can’t be saying that man allow it! You can tell he doesn’t watch much football innit…

J1: Wait, wait wait… nah I take it back. Man City. Yeah there wouldn’t have had many hits right now if I selected United…

A1: Oh it’s City now, yeah? Just like you turned your back on your family to support Arsenal…

What was your first footballing memory?

A1: The 2010 World Cup was the first time I really felt a way about football. The feeling, the spirit… that tournament was just crazy. I remember that mad Torres goal Chelsea scored against Barca too from early.

Who was your GOAT growing up?

J1: You know what, mine was actually Jack Wilshere. He was Arsenal’s talisman. I always used to buy him on Ultimate Team back in the day.

What positions do you actually play when you’re playing football seriously?

J1: Most people assume I’m a target-man or a centre-back, but I was actually a goalkeeper back at school. Back then, I remember they tried replacing me with a much smaller guy. But during the game, he actually conceded some silly goal… so they threw me straight back in net during the game! It was cold-hearted. But since then, I’ve always been a kicked ball.

Ok, here’s a tough question for you: say I’m Arteta or Tuchel, and I’m offering you a deal to join the club. Are you keeping with music or joining your club?

A1: Nah I can’t lie, I’m gone! The reason why, is because it’s more secure – and football is my first love man. I’d struggle to say no!

J1: I’d be sticking with music. I just love it too much.

Finally, we’ve got to talk about your upcoming project. You’ve said it’s gonna be: “like a defender playing out from the back, coming into midfield”, what made you say that?

J1: People are gonna be surprised with it. It’s more than just music. In football terms, this new tape is top bins.

A1: The way people are gonna react when we drop, I think they’ll realise that we’re talented. The tape is just gonna show the levels.