'Not all journeys are the same' is a phrase a lot of people can relate to. But I don’t think anyone has had a footballing pathway quite like mine.

Being the only girl on your football team for twelve years isn't how many female ballers make it pro. I also don’t think there are too many players in the Women’s Super League who had to fly back-and-forth for monthly training sessions just to experience playing with girls their own age. But then again, I'm not too sure a lot of players come from a place where the population is as low as 63,000 people either. But every journey has a starting point, and Guernsey was mine.

Growing in Guernsey, there weren't any opportunities for girls to play football. Despite being one of the most beautiful places on earth, there aren’t that many opportunities for young people fullstop. On the island, you have to make your own chances and take them while you can – and in a lot of ways, that’s exactly what I did. If you had a goal in mind, you had to figure out how to achieve it with limited resources. But that suited me fine, as I’ve always been someone who won’t take ‘no’ for an answer.

I played football with boys from the age of four until I was sixteen. Squaring up to players twice my size and having to work twice as hard because I wasn’t as strong or fast as my peers made me the player I am today. I made my senior debut with Brighton under one of the best managers in women’s football history - Hope Powell - at just sixteen. Playing in the top-flight of women’s football in England - arguably Europe - is an achievement many don’t accomplish during their careers…let alone before they’re legally allowed to vote! Being the only girl on a team of boys for such a long time, contributed massively to me reaching that milestone. 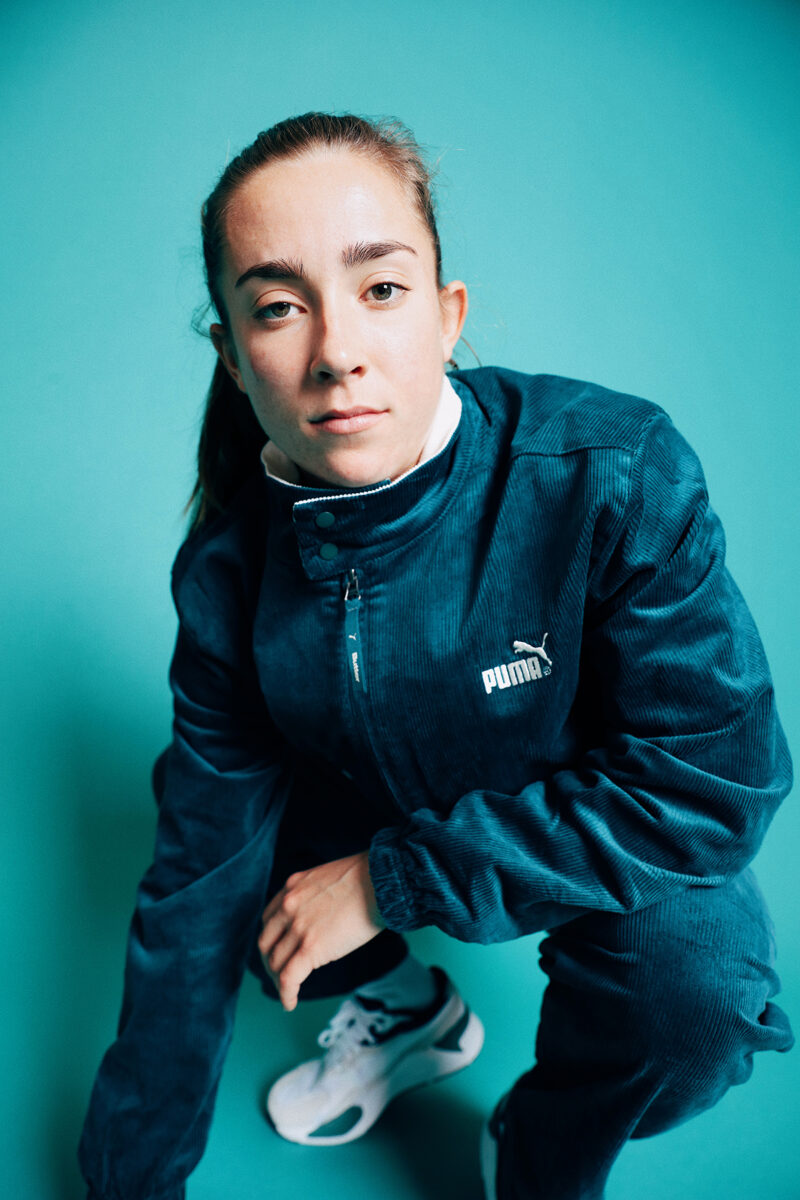 I couldn’t have asked for a better environment to grow up in. As a family we’d be down the beach at Vazon most days with friends and neighbours. Everyone knows one another in Guernsey, it’s a really tight-knit community. It might sound like a bit of a cliché, but it really does feel like a family. There’s a massive support network of people wanting to make sure everyone gets the help they need. Without that network, I wouldn’t have been able to play football. I received a lot of financial support and sponsorship from the islanders, something I am still grateful for to this day. I think if you were to ask a lot of those people whether or not I was born to be a footballer they’d say: “absolutely!” Besides, I didn’t have a choice with a Dad like mine!

My Dad was my coach from the first time I kicked a ball at four until I left Guernsey at sixteen. He still likes to chip in every now and then with tips and suggestions for improving my game. He’s no Hope Powell, but he knows a thing or two about football.

Despite our surname, we are not related to Matt Le Tissier! But my Dad did play semi-professional football when he lived in England. When he returned, he continued to play for our local team – the same team I played on for 12 years – St Martin’s. I remember our first football session together because beforehand, we were sitting in the car and he said to me: “Maya, I’m not too sure how the boys are going to get on playing football with you, so you might want to sit out and watch the first session.” I joined in straight away and absolutely loved it!

“When people call me a trailblazer I don’t really think too much of it. I’ve been breaking down barriers my whole life.” 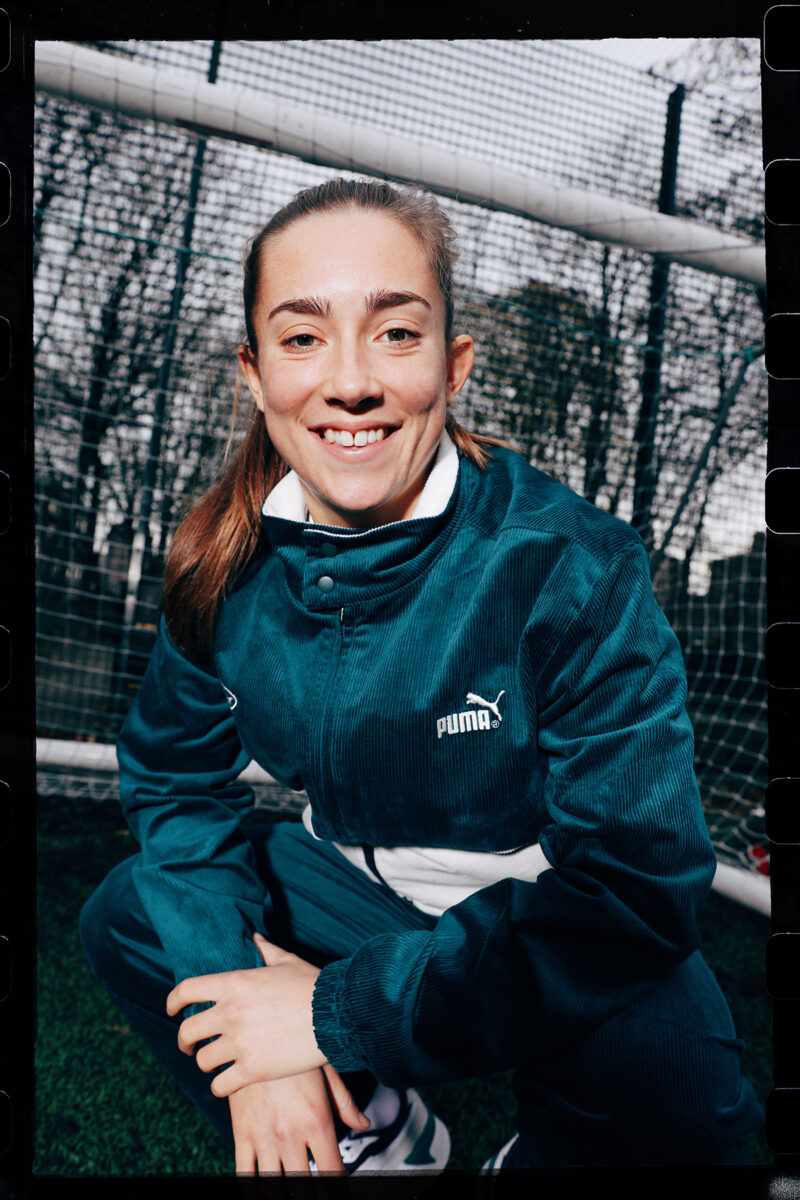 I played with the same group of boys for over a decade. I still keep in touch with them and have a kickabout every time I’m back home. And yes, they insist on giving me advice and even try to show me how to improve my free-kicks. They just want me to be the best possible player I can be. I can sometimes feel their sense of pride because of what I’ve managed to achieve. That sense of community is something I’ll cherish forever.

Playing football with boys had its ups and downs, but I was always seen as one of the ‘lads’. For me, that was perfect because I didn’t want to be ‘othered’. When they played against me there were no ‘half-challenges’. I made sure to give as good as I got so I was respected for my ability and determination. Those boys were an extension of my family, and they helped shape me into the player I am today.

I was the first girl to play in Guernsey’s U16s boys’ team. One of the biggest competitions I played in was the Muratti Vase, an annual tournament between the Channel Islands. It’s one of the biggest sporting events of the year and to be a part of that history is amazing, but when people call me a trailblazer I don’t really think too much of it.

I’ve been breaking down barriers my whole life, I’ve had no other choice. There weren’t any girls’ teams for me to play on, let alone any academies or development pathways for me to access. Would I have had it any different? I don’t think so. Don’t get me wrong, things could have been a lot more equal. But you can’t change the past, you just have to learn from it. It’s important for young players to realise, sometimes you have to work with what you’ve got right in front of you. And more often than not, that can be something that really sets you apart from your peers.

“Every girl wanting to play should be able to. Their dreams should become a reality partly because of the power of representation.” 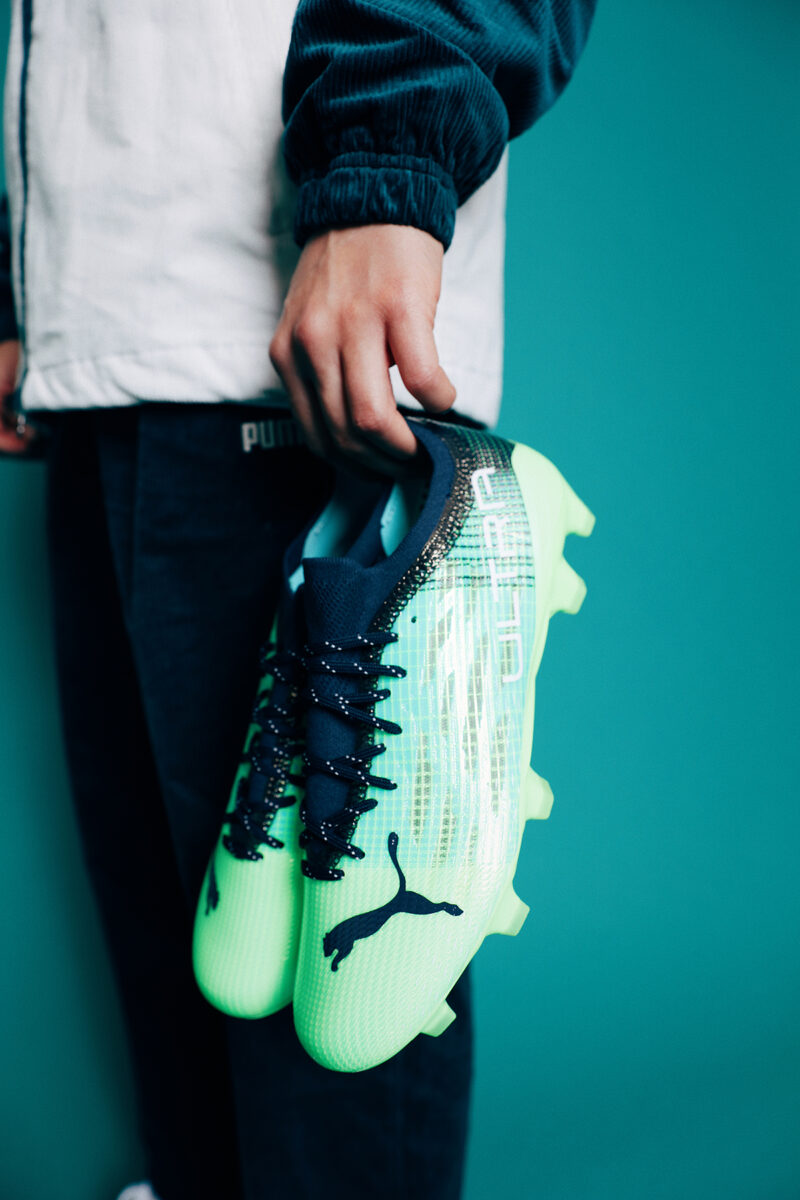 Whenever I came up against players who were built like fully-grown men, it just influenced my style of play. My footballing brain is wired differently because of that. I couldn’t out-run players or push them off the ball, but I could out-play them. I needed to have exceptionally good decision-making skills, and that’s helped me today.

I never really had female football role models growing up. I didn’t experience girls’ football until I was about 14. I grew up idolizing Steven Gerrard because I am a massive Liverpool fan – it’s embarrassing the number of times I’ve watched his documentary ‘Make Us Dream’, but he did make me dream! Dream of playing in front of massive crowds in packed out stadiums. But I want my story to be one that inspires girls to play football everywhere.

At that age I travelled to Southampton with my team St Martin’s for a trial match. We would often travel to Southern and South-Western parts of England to play other teams, as that was the only way of being scouted. I was the only girl who played in that game and I absolutely bossed it! So much so, Southampton’s coach came over afterwards and said I needed to play in England. That was the moment I realised there was more to life than playing football with boys in Guernsey.

I had to make several regular flights to England in order to play in an academy set-up, and I did that from the ages of 13-16 while playing for Hampshire. At the same time I still represented St Martin’s and Guernsey. It was a lot. Financially, emotionally and physically. Then the FA told my family I could no longer travel as I was missing too many games at home. I thought my dream had ended.

“I want to inspire the next generation of players to be a part of change. If a girl from Guernsey can do it, so can you.” 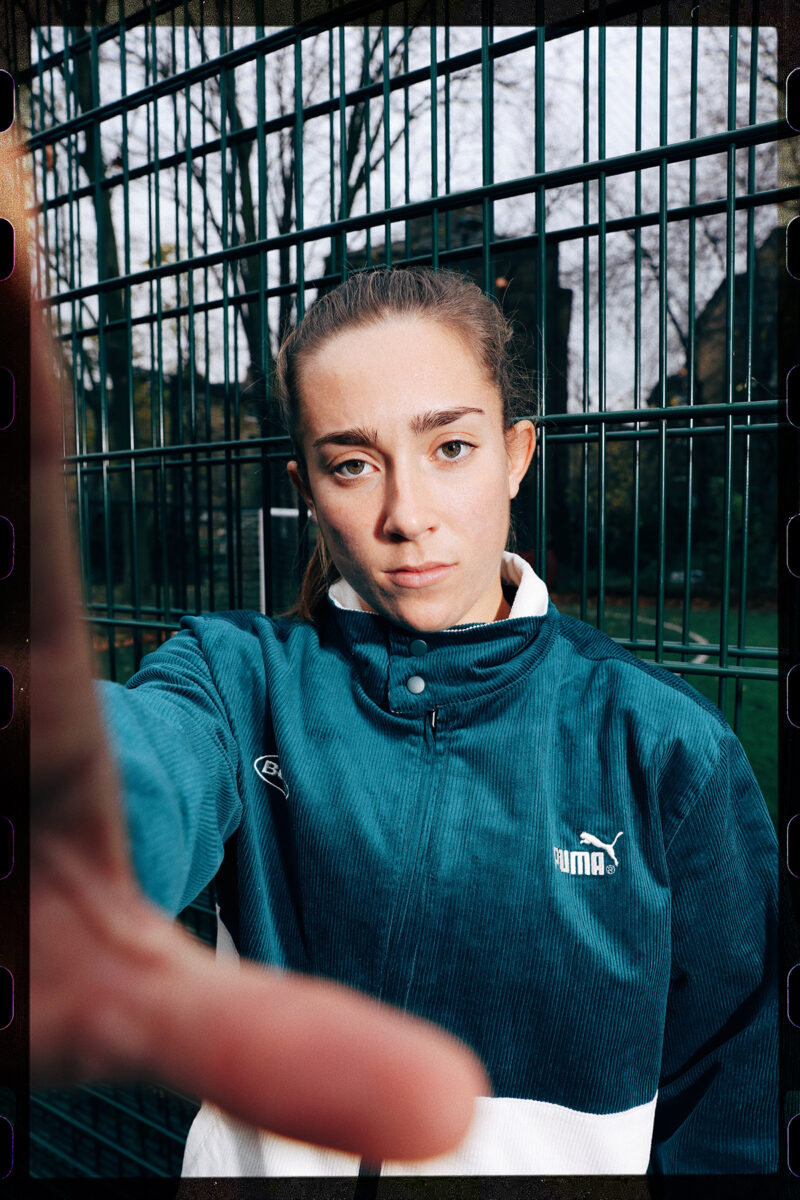 But, while at a regional camp in the South-West, I got picked up by England U15s and was permitted to attend those camps, while still playing football back home. I just had to wait two years before I could move to England to pursue a career in football. Where I could finally play with girls! Not even girls my own age, just girls!

I moved by myself to play for Brighton at 16. I have no family on the mainland and spent two years living with a host family before moving into player accommodation. It was tough, but I’d experienced bigger challenges and knew it was necessary if I wanted to make my mark.

The jump between playing youth football at an international level to WSL first-team football is huge. While I believe a lot of female players can bridge that gap sooner if they’d continued to play boys’ football for a bit longer, I can completely understand why a lot choose not to. It can be scary. I’m from a tiny community of people, where I knew the boys I played with my entire life, and they only knew me as ‘Maya the footballer’. Football is still a male dominated space, and that can be completely overwhelming for a lot of girls and young women when there are no outlets or resources designed for them specifically.

I think there’s still a range of obstacles female players face this day in age, whether it’s a lack of female coaches through to accessing nutritionists. Facility standards are a constant topic of conversation. At Brighton we are very fortunate to have access to such state of the art facilities as well as personnel like S+C coaches, physios and sports psychologists. But there are a lot of female players who don’t have those resources. A major issue – and something I experienced – was a distinct lack of talent pathways. I literally had to move countries in order to be spotted. My time playing boys’ football was invaluable, but it shouldn’t be how the next ‘Maya’ from somewhere like Guernsey has to be ‘seen’.

I want more opportunities for young girls growing up in remote areas. I want more female coaches to take on the mantle from icons like Hope Powell. I want more recognition from ‘traditional’ fans as female players put in the same amount of time, make the same sacrifices and play the same game as male players. So tune in to watch us play! Come down to a game or two and support the game you love.

There’s been a lot of change in the women’s game these past few years. Brands like PUMA in particular are helping to propel women’s football forward. Their support is something I could have only dreamed of growing up! I hope in ten years time, we can see that other aspects of the game have continued to change for the better. I want to be a part of that change. More than that, I want to inspire the next generation of players to be a part of that change too. If a girl from Guernsey can do it, so can you. 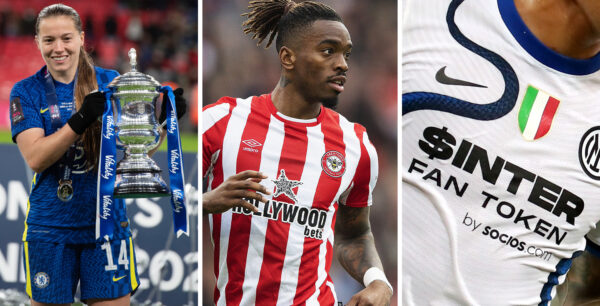 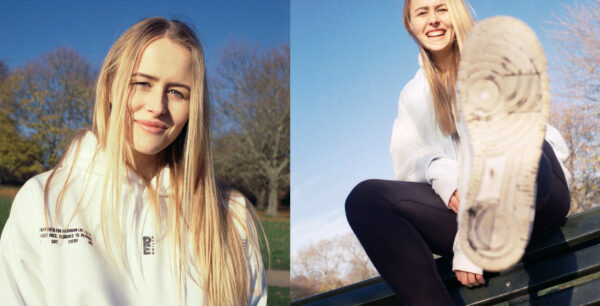